For teenagers who love all aspects of music, there’s a camp for you!

If your teen loves talking about music, playing music, creating music or just listening to music, there’s a fun place for them to go learn about it.

The City of DeSoto Parks & Recreation Department is promoting a great opportunity for teens who want to learn more about the world of radio.

XperienceRadio.com is a Generation Elevate Inc. online radio station that is strictly geared towards teenagers. It’s “a place where teens can be heard.”

A Positive Media Platform for Teens

XperienceRadio.com provides a platform for teens to express themselves in a positive way as they continue to grow as productive, responsible individuals. The online radios station plays the latest music and explores topics that today’s teens face with valuable insights and lively conversations from popular authors, entertainers, experts, athletes, composers but most importantly we will hear from our TEENS!

This online radio program just for teens give them a hands-on experience for them to learns about radio, engineering, and producing video and audio production.
The camp is a safe place for teens, age 13 to 17, to positively express themselves on a range of topics which are important to them. Teens will participate in live online radio shows where they can play the latest music and explore relevant topics with valuable insights and positive conversations from experts in their fields. 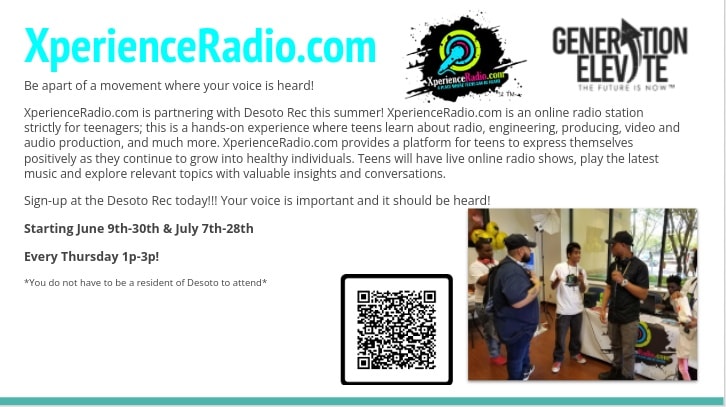 Thomas Edison even had a patent in 1891 for a sip-to-shore wireless telegraph that used electrostatic induction. From 1860 to 1910 inventors worked to create and harness the power of radio waves, resulting in a Nobel Prize in Physics for Ferdinand Braun and Guglielmo Marconi. Each successive invention brought us closer to the radio we know today.

Teens ages 13-17 are encouraged to reserve their spot to join the July camp can be found at: https://bit.ly/3NswgZ7
#summercamp #summercamps #youthcamp #Youthcamp2022

Questions about this camp and any others offered by DeSoto Parks & Rec can be answered by Sydney Elliott, MBA, CPRP | Youth & Business Coordinator
DeSoto Parks and Recreation Office 972.230.9651 or email selliott@desototexas.gov