Home News Tami Tobey: “In November, You Can Hold Me Accountable – I’m Not...

Dozens Speak To Board At Marathon Meeting

Last night, dozens attended the Midlothian ISD Board meeting to speak out about the actions of board member Tami Tobey. Recently, a photo of Ms. Tobey was sent to the Dallas Observer, showing her dressed as tennis player Serena Williams. The photo has sparked outrage throughout the community with over 3500 people petitioning for her to resign, including several members of the board.

One gentleman, Mr. Wayne Howard, said he had graduated from the school system back in the 1960’s and reminisced about how things were back in those days. He pointed out, “We’ve got a church here that’s been around 100 years. You’re throwing around ‘you talked to the community leaders, the black community leaders’, who did you talk to? Ain’t nobody been over in my neighborhood. Ain’t nobody been over to the church. Who did you talk to?” The audience responded with applause and cheers.

He acknowledged the board members took a hard job. He emphasized “I don’t want you to hear me, I want you to feel me.” And he welcomed the new black members to the community. His remarks were powerful, whether you watched it in person or online. He said he had not been attending school board meetings recently, but fully intended to in the future. “I got my eye on you”. His insights were invaluable and the conclusion of his remarks were met with long applause.

The Board meeting continued until nearly 2 a.m. so details of each speaker’s thoughts cannot all be presented here, but suffice to say, the vast majority shared their belief that Ms. Tobey should resign. It was emotional as adults and young people shared their personal experiences and the impact of Mrs. Tobey’s actions.

A Community Speaks From Experience

One young lady, Olivia Natividad, who graduated in 2016 said she was of Hispanic descent and was immediately judged by her looks, even before she spoke. She said she was told by a guidance counselor that there wasn’t any ‘English as a second language class’ available. She said no translator was available right then, before she even spoke. “That experience still breaks my heart, and embarrassed me five years later,” she said. “I have never had to fight so hard for education in my life … Racism and intolerance will continue until Jesus comes,” she said. “But we have the opportunity to be the hands and feet of Jesus now. Diversity is not complicated, and there are many people here willing to help, so do better.”

That may seem incredible, but Ms. Natividad, continued “During my time as a student, I was sexually harassed by an educator, called racial slurs by my peers. When I brought my concerns to staff I was told I was over-reacting and I should be flattered by the attention.”

Next, Dr. Lisa Taylor Cook spoke, “I have come here today to advocate for changes to better our future,” she began. “We felt welcomed (to the city) as a multiracial family as I’m African-American and my husband is caucasian. At the time we moved here, our oldest was just entering third grade and our youngest had just turned three.”

She continued that at all levels in Midlothian schools, her children had amazing teachers but there were also biases that surfaced “every step of the way.”

“The expectation (an elementary teacher had) of my biracial son and of his non-white classmates was different,” she said. “At middle School, when I enrolled my daughter into the pre-GT classes I was challenged on if she could ‘make it’ in the class. I was surprised by this question as she had a 4.0 at the time. In addition, my husband and I were asked about our own educational levels and if we understood that pre-GT classes were challenging. I had to explain to the counselor that both my husband and myself were working on our PHDs.”

Ms. Cook said an experience in high school – just this school year – was even more disturbing. “A teacher told the class that she didn’t understand and didn’t believe in interracial couples and didn’t understand why these couples were having children.” The teacher continued that “she hoped her white children would not be with anyone who was black. This teacher felt her words were not offensive to my biracial child or the black student who was in her classroom.”

“Each of these times, I have had administrative support to minimize the biases that were influencing my children’s education. While she said she was able to advocate for her children, not everyone is able to do that. She continued that there should be steps taken by ISD board members: First, there should be a code of conduct for board members including how and why a board member can be dismissed and there should be a public timeline on when board members need to attend classes on diversity awareness. “Statements that are racist and discriminatory cannot be tolerated. There need to be consequences for such actions if necessary. These need to be included within the boards operating procedures.”

Yvonne Tomlin said she was a 2018 graduate of Midlothian High School. “At some points in time, I felt that I was prejudged by the color of my skin and not by the talents I had brought to the table … Racism is wrong today, has been wrong yesterday, and was wrong in 2012. The color of my skin is not just a party costume or some hip trend.”

With a raised voice, you could hear the anger, frustration and defensiveness from Tobey. “This country was founded on change. There are certain things that are completely unforgivable…. Some of the biggest things I’ve learned were not on the mountaintops,” Tami Tobey said. “They were in the valleys.”

“It would have been much easier. Let me tell you, every mentor I have … let me tell you, they all said resign,” Tami Tobey said after dozens of residents of Midlothian told her to do just that at the Monday, June 15 Board of Trustees meeting. “Pray about this over the weekend. Run away! Get away from all this! … But, you know what, I don’t answer to but one person. I wanted bad to hear – Resign! You have a life. You have a business. You have plenty of things to keep you busy … This was a calling for me. I came here to serve kids. And my God still says stay.”

“The voters put me in this position,” Tobey continued. “And there is a process for me to leave … In November, please hold me accountable … I’m not resigning today!”

As she spoke, several members of the audience talked back, telling her she was making things worse. Some briefly chanted “she’s gotta go” before the Board President called the meeting back to order. When she told those in attendance, “In November you can hold me accountable!” A few people clapped and made noise, while others responded. One attendee said you’re showing your white privilege by saying hey listen I did this, but guess what who cares?

Ms. Tobey’s comments came after over an hour of citizens comments, all for the most part, expressing displeasure over her having appeared in blackface in 2010 and 2012. She tried to argue the difference in “painted face” vs. “black face” but the audience pushed back, clarifying they are both offensive. Many expressed their experience that there were problems within the district itself, not only with Ms. Tobey.

MISD Board Encouraged Tobey To Resign

Board President Matt Sanders introduced a resolution encouraging Mrs. Tobey to reconsider her resignation. Tobey introduced an amendment to the resolution to “correct it to the right year which was 2010 and also to include instead of painted face, blackface is what I allegedly did” and discussion ensued. At which point, the audience reacted to her using “allegedly”, by showing a poster with the picture. “Not allegedly, you did it,” they responded.

In total, with other business being discussed including the budget and the 2020-2021 MISD calendar, the meeting lasted over six hours. The underlying message to the MISD board, “You’re on notice. We are watching.” This won’t be the last time the community speaks out about the inequality perpetuated in Midlothian ISD. The ball is rolling.

Focus Daily News encourages everyone to watch the board meeting. While we can tell the story, hearing the emotions and words spoken can’t be communicated with the same impact as hearing them yourself. 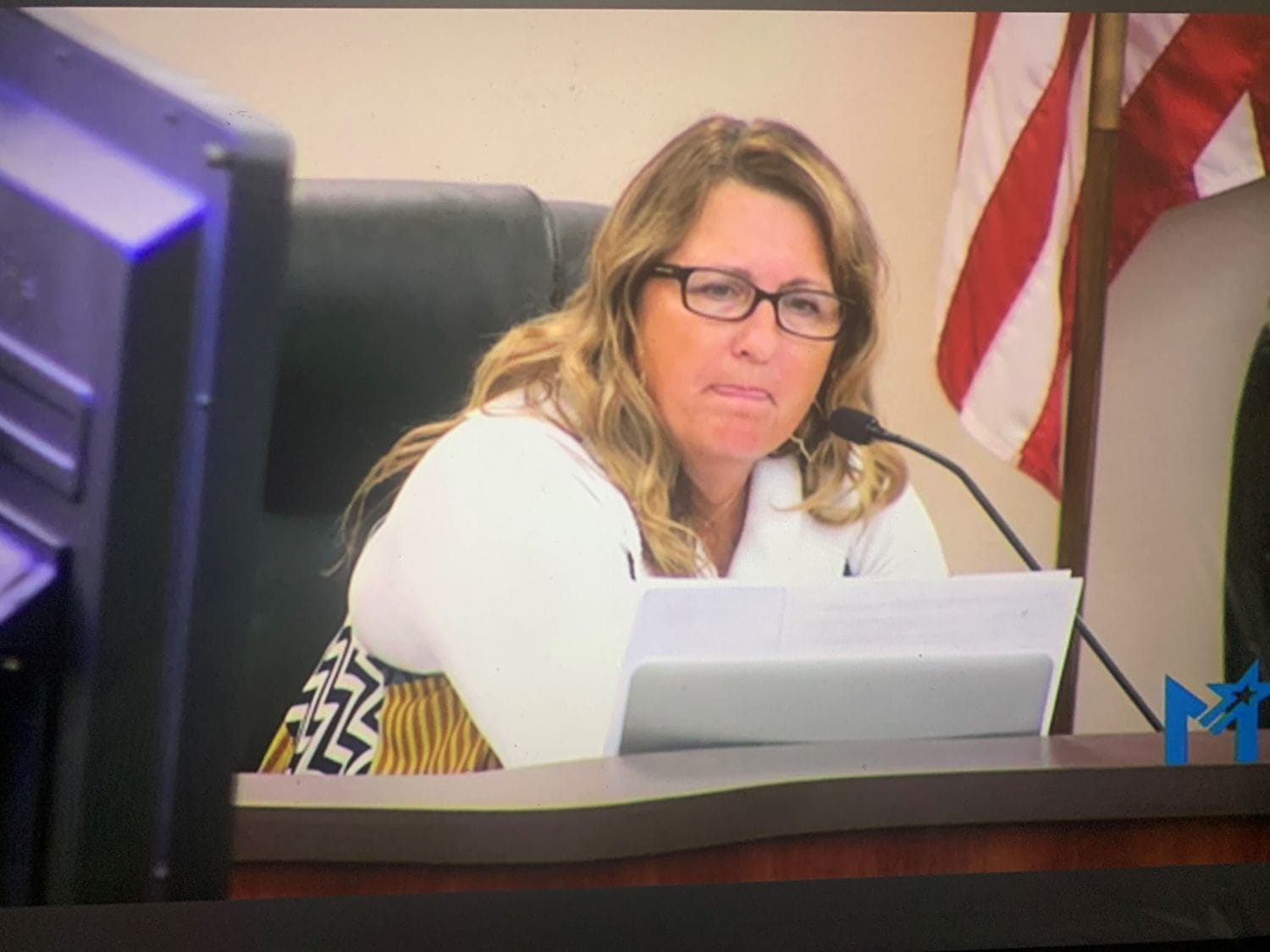