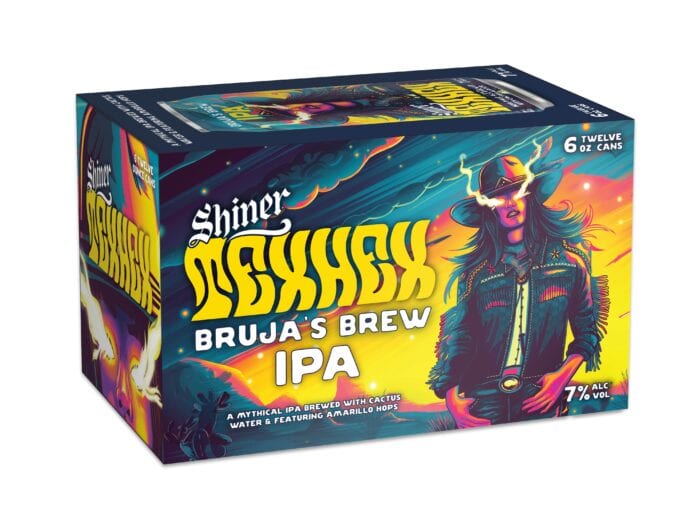 Calling all IPA fans, especially Texans, Shiner, the independent, family-owned makers of the iconic Shiner Bock introduce their new IPA series, Shiner Tex Hex IPA. First up, is the launch of the flagship Bruja’s Brew, a mystical IPA brewed with cactus water. Fans of Shiner have consistently requested the brand have a bigger presence in IPA, the largest and fastest-growing beer category in the U.S. Bruja’s Brew will be the first of three new IPAs launched under the Tex Hex umbrella in 2022.

Tex Hex Bruja’s Brew is a mythical IPA brewed with cactus water and Amarillo hops, an ode to the brand’s Texas roots. The beer delivers a hops-forward aroma and flavor that is a mix of bright, citrusy, resinous and tropical, featuring a medley of tangerine, pineapple, citrus and stone fruit. Initial consumer testing revealed that the brew outperformed the leading national and local IPA offerings in a series of blind tastings.

To capture the imagination of IPA drinkers, Shiner is also introducing the character of “La Bruja”, the alchemist, who is prominently featured on Tex Hex cans and packaging. La Bruja is a dark, mysterious shaman who roams the Texas desert gathering ingredients for her otherworldly creations. Brewed with fire, magic, and sin, her IPAs are only for the worthy, the ones called by the wind. See La Bruja in action HERE.

“Shiner could not be more excited by the launch of Tex Hex IPA. Shiner fans have demanded that we get back in the IPA category, and we believe Tex Hex delivers in a groundbreaking way,” says Matt Pechman, Shiner Beers Head of Marketing. “With unique Southwestern ingredients like cactus water, and a taste that we know connects with IPA drinkers, we are incredibly proud of this beer. We can’t wait to see what else La Bruja has in store for us in 2022 and beyond.”

Tex Hex Bruja’s Brew IPA (7% ABV) is rolling out in limited distribution in Texas and nationally throughout January with plans for a full-scale launch in the spring. It will be sold in 6-and 12 pack cans, with additional formats to come in the future. For more information on Shiner Beer and its full portfolio, visit www.shiner.com.