DUNCANVILLE—Mike Trousdale, who retired February 14 after serving the Duncanville Fire Department more than 36 years. Recently, city council members recognized him for his service at the February 28 meeting.

Trousdale started his career with Duncanville Fire Department in October, 1982. He was promoted to Equipment Operator (Engineer) in 1997, and became Captain Trousdale in 2001. On June 7, 2010 he rose to the rank of Battalion Chief Fire Marshal.

Chief Sam Rodhe said, “Over the past 36-plus years, Mike has been instrumental in developing our fire prevention program and initiatives. As well as ensuring that the fire code is enforced throughout the city. He has been a key part of our leadership team, and leaves behind big shoes to fill. We wish him all the best in his retirement.”

“The last 36 years working in the fire service at the City of Duncanville has been my honor and privilege,” Trousdale said. “I enjoyed serving the citizens of Duncanville, and had the pleasure of working with many great people over the years. The city was very good to me, and I look forward to retirement.”

In 1946, 20 local businessmen discussed starting a volunteer fire department. Retired Dallas firefighter, Phil Towers, was elected to serve as the first volunteer Fire Chief for Duncanville. Each member of the group donated a minimum of $20 for construction of a one room fire station at the corner of Orange and Davis Streets on land purchased from “Uncle Ed” Hastings. Labor to build the station was provided by community volunteers.

Volunteers assisted Chief Towers in building a 1946 Ford Engine; other pieces of equipment were purchased from Dallas Fire Department. In 1947 Duncanville citizens voted to incorporate the city with a recorded population of 557. With minimal phones in town, a siren was installed on the water tower located at Main and Davis Streets. When an alarm came into the Fire Department, the Fire Chief would push a button on his phone to sound the alarm which would alert the firemen. The next tone told them which direction to go to from the center of town. One tone meant north of town, two tones meant east of town, three tones meant south of town, and four tones meant west of town.

In 1954, Fire Chief Marcus Harrington travelled to Detroit, purchased a General Motors truck, and drove the truck back to Duncanville to save the city money. From 1956 to 1958 helmets, gear and uniforms were purchased for the volunteer firefighters. Before 1956, firefighters purchased their own uniforms and gear.

In 1963 Fire Chief Bill Sheppard administered the first entrance exam for the position of paid firefighter. By 1965 the department consisted of five paid firemen and thirty volunteers. On March 1, 1965, Robert O’Burke was hired as the first paid Fire Chief for the City of Duncanville. In 1966 the fire station at 323 West Camp Wisdom was built on land donated by a local businessman.

With the help of the Duncanville Jaycees, Jaycettes, volunteer firemen, and the Ladies’ Auxiliary, a fund raising drive was held to purchase a rescue truck with equipment. In May of 1971 the department took over emergency operations from the local funeral home, who also donated a Dodge ambulance. In 1974 the all paid department became a part of the State of Texas Civil Service.

Duncanville Fire Department currently consists of 55 highly dedicated and trained professionals. They provide a broad range of emergency and non-emergency services to the citizens of Duncanville and surrounding areas. Operating from two fire stations, the fire department responds to more than 6,000 alarms annually. They serve over 39,000 citizens within an 11.2 square mile response area, and participate in an extensive automatic aid regional response program with the cities of Cedar Hill, Dallas and DeSoto. 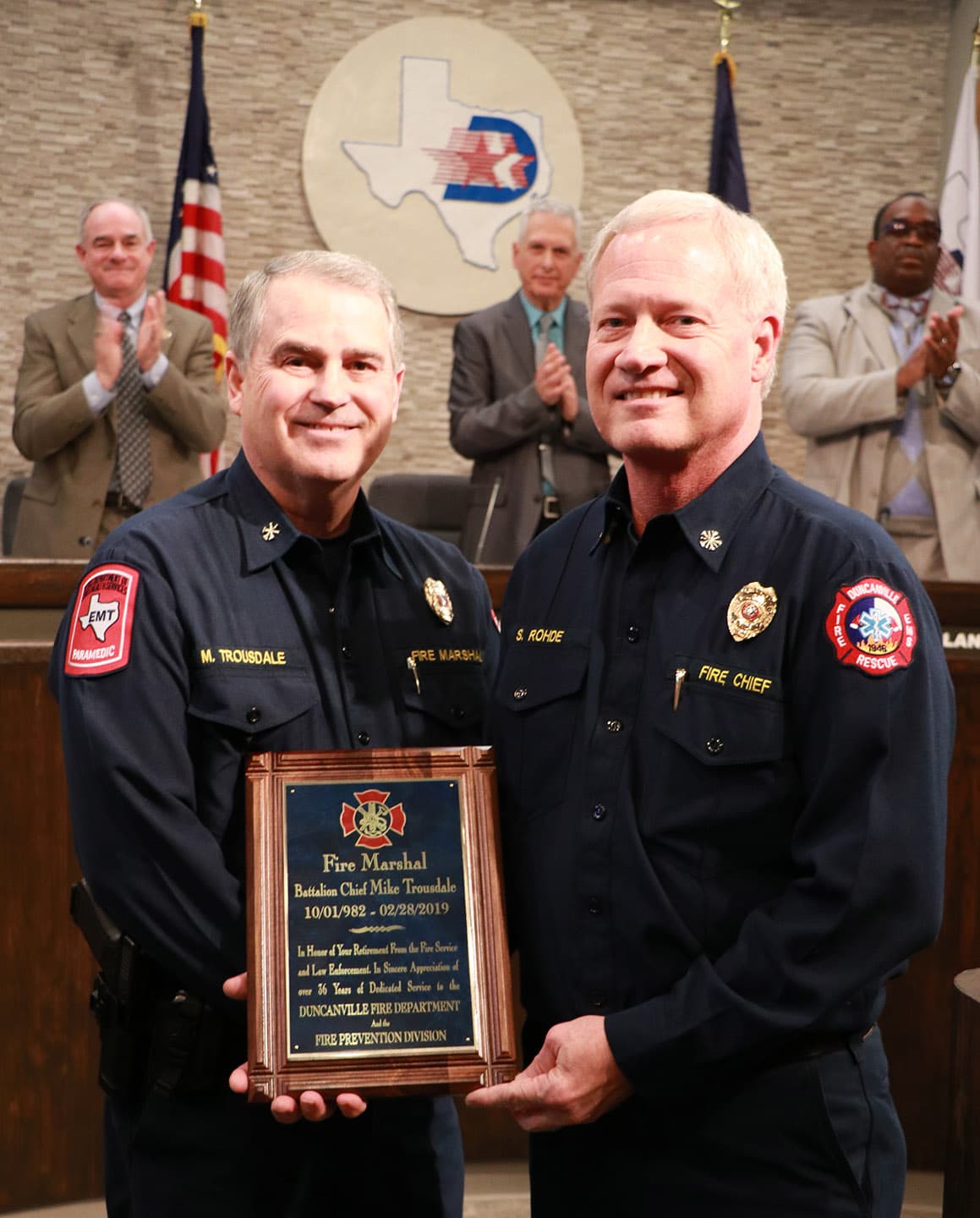