At the fall 2017 Texas Truck Rodeo I completely fell in love with the 2018 Ram 1500 Southfork. So much so, that I asked Ram Vice President of North America, Jim Morrison, serious details on pricing. Who knew the 2019 Ram 1500 would blow me away?

Now, after reviewing the press conference for the new 2019 Ram 1500, I find that I can hardly wait to get behind the wheel. I cannot imagine loving this new model even more.

At the time of the rodeo, I couldn’t think of anything more I could possibly want in a truck. Yet the 2019 Ram 1500 reveal has changed the game for truck owners.

Mr. Morrison and his team of designers and engineers went far beyond what I then thought was the perfect truck. I doubt I can remember to cover all the attributes discussed at the North American International Auto Show in Detroit in press conferences and informational releases provided by FCA, but I will discuss a number of them here (due to a severe bout with the flu, I had to attend via the internet).

In a special media event, Chairman Sergio Marchione discussed trucks and how FCA decided to switch its primary emphasis to trucks and SUVs and how this was the right decision.

“Now trucks are more functional than autos with a greater degree of flexibility than they have ever had. Two of three vehicles sold in the United States are …. both trucks and SUVs have done it. We shifted most of our resources to the production of trucks and SUVs. We launched the new RAM 1500 today. For a period of time we will have both vehicles on the market, the old and the new.”

We may need resolutions and gym memberships to lose those extra pounds, but Ram’s engineers have reduced the 1500’s net weight nearly 225 pounds when compared to the previous model. Lighter, yet stronger, the new frame features 98 percent high-strength steel for improved durability, weight and rigidity. The end result- 2019 Ram 1500 is the strongest Ram 1500 ever, with the most efficient frame in the segment!

The most significant new innovation in terms of the powertrain has to be the inclusion of an eTorque mild hybrid system on both the 3.6 liter Pentastar V-6 and 5.7 liter HEMI V-8 engine. eTorque will add 90 lb. ft. of torque to the Pentastar and 130 lb. ft. more (making new torque total to 540 lb. ft.) to the HEMI V-8.

Significant gains will be realized in fuel efficiency according to FCA as the system will combine a belt-driven motor generator with a 48-volt battery pack. RAM had already led the truck market with their eight-speed automatic transmissions and a new generation of the TorqueFlite will be introduced in the 2019 model.

The RAMBOX has not yet been duplicated by any other truck and it has been improved even more in the 2019 model. It has an obvious locking mechanism and a new 115 volt power outlet is included inside the box. The tailgate can be released from both the keyfob and inside the cab. Ram has now even installed a step down to make getting out of the truck bed a lot easier – a must for those who are height challenged such as myself.

Inside the new 2019 Ram 1500 the most stunning feature that jumps out at you is the 12-inch ultra-clear high-resolution screen. The new UConnect offers both Apple CarPlay and Android Auto. The screen is even “multi-tasking” in that you can play both Apple Car play and access the navigation and other controls on the bottom part of the screen.

Sirius OnDemand will allow you to select what you specifically want to listen to. And listening has become more enjoyable, with the most powerful audio system ever available in a pickup. New Ram features a Harman Kardon audio system with 19 premium speakers, 900-watt surround sound amplifier, 10-inch sub-woofer and active noise cancellation

The inclusion of a new 360 degree camera is something that is near-and-dear to my heart because of the steep winding driveway to our home. Both Kristin and I have a number of points as we go down the incline where it is completely impossible to see where a rock retaining wall begins to curve around the drive. I admit to a small mishap the first week we moved into the home because of the complete lack of visibility. The inclusion of this camera provides yet another very important reason to purchase a new Ram 1500.

I could go on and on … and I will when I actually take the new 2019 Ram 1500 for a test drive. Expect to read about heating and cooling and reclining front and back seats, additional inside storage, real knobs for controls as well as those on the steering wheel …. Stay tuned!! 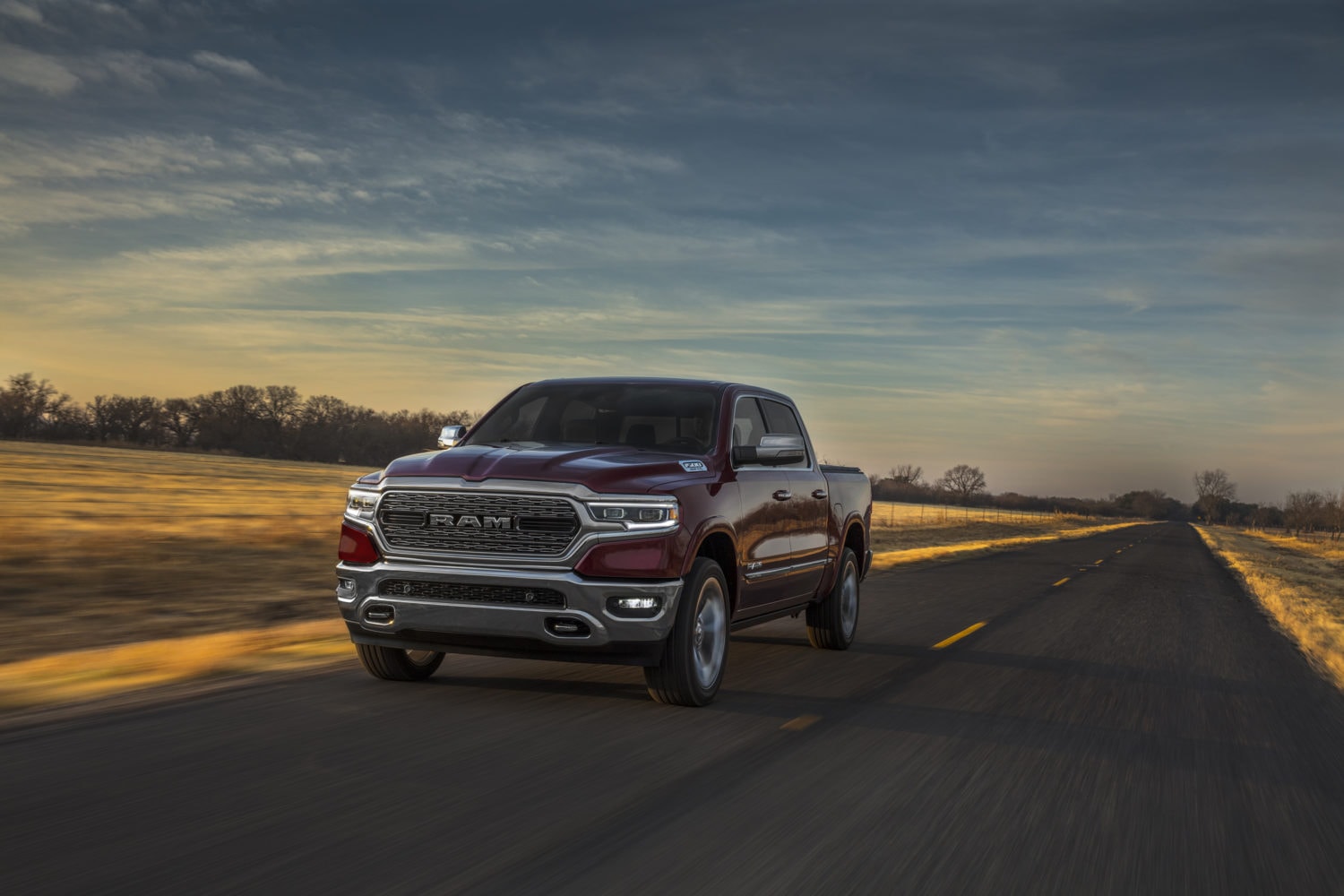