Home Entertainment My Son the Waiter: A Jewish Tragedy At Eisemann Center

Brad Zimmerman’s autobiographical comedy, My Son the Waiter: A Jewish Tragedy runs July 12-29 at the Eisemann Center for the Performing Arts in Richardson.

The story of the author’s struggle to fulfill his dream of being a comedic actor in New York, “My Son the Waiter” has received great reviews everywhere it plays. Zimmerman’s had sold-out runs off Broadway in NYC, and in Philadelphia, Boston, Atlanta, Toronto, San Diego and many other cities. The show comes to the Eisemann after a successful run at the Colony Theatre in Burbank, CA.

This hilarious and poignant story is universal in its message: The journey to follow one’s dream, and the parents who suffer through it. Every mother dreams her children will grow up to be happy, healthy, and successful. Every Jewish mother secretly adds specifics to her wish: A doctor, a lawyer, a dentist, or these days, a Silicon Valley tycoon would make her very happy. Brad Zimmerman’s mother has finally adapted to her ‘actor-waiter’ son’s career choice and financial situation: “If all goes well, I think Brad is going to buy a bookcase,” she boasts to her friends.

Zimmerman spent 29 years “temporarily” waiting tables in New York, all the while chasing a career in acting and comedy. He tells of his pursuit, along with stories about his childhood, family, and misbegotten love life with warmth, wit, self-deprecating humor, and wicked charm, and combines his years of training as an actor with his innate comedic talent.

Zimmerman also examines the trials and tribulations of waiting on tables – particularly for someone not exactly invested in that career, and with little tolerance for persnickety diners. He says he did enjoy some of the bantering he did with diners, and often tried out material on them, however there were also bossy customers who would snap their fingers to get his attention… and health-food obsessives who elaborately customized their orders and button-holed him over ingredients.

His perseverance and hard work finally paid off, and Zimmerman went on to act, with a small part in “The Sopranos” playing Johnny Sack’s lawyer. He also became the opening act for a number of well-known entertainers, including George Carlin, Brad Garrett, Dennis Miller, Julio Iglesias, and Joan Rivers who said “I’ve had three great opening acts in my lifetime: Billy Crystal, Garry Shandling, and Brad Zimmerman.”

Zimmerman worked on the script for “My Son the Waiter: A Jewish Tragedy” for nine years and performed it in small venues all over the country, including a stint at Florida’s Stage Door Theatre, where it came to the attention of producers Dana Matthow and Philip Roy. The play spent two years at Stage 71 off-Broadway in NYC and has toured all over the U.S. 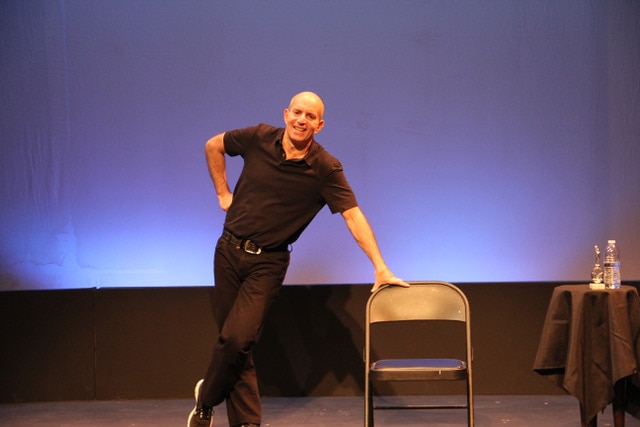