Mansfield pooches now have a place to hang up their leashes and howl.

Man’s Best Field Dog Park opened at 5 a.m. Wednesday, giving the city’s pups 7 acres to stretch their legs, roll in the grass and lay under the trees.

The city’s first dog park has been a long time coming, and much anticipated by residents, said Matt Young, director of parks and recreation. 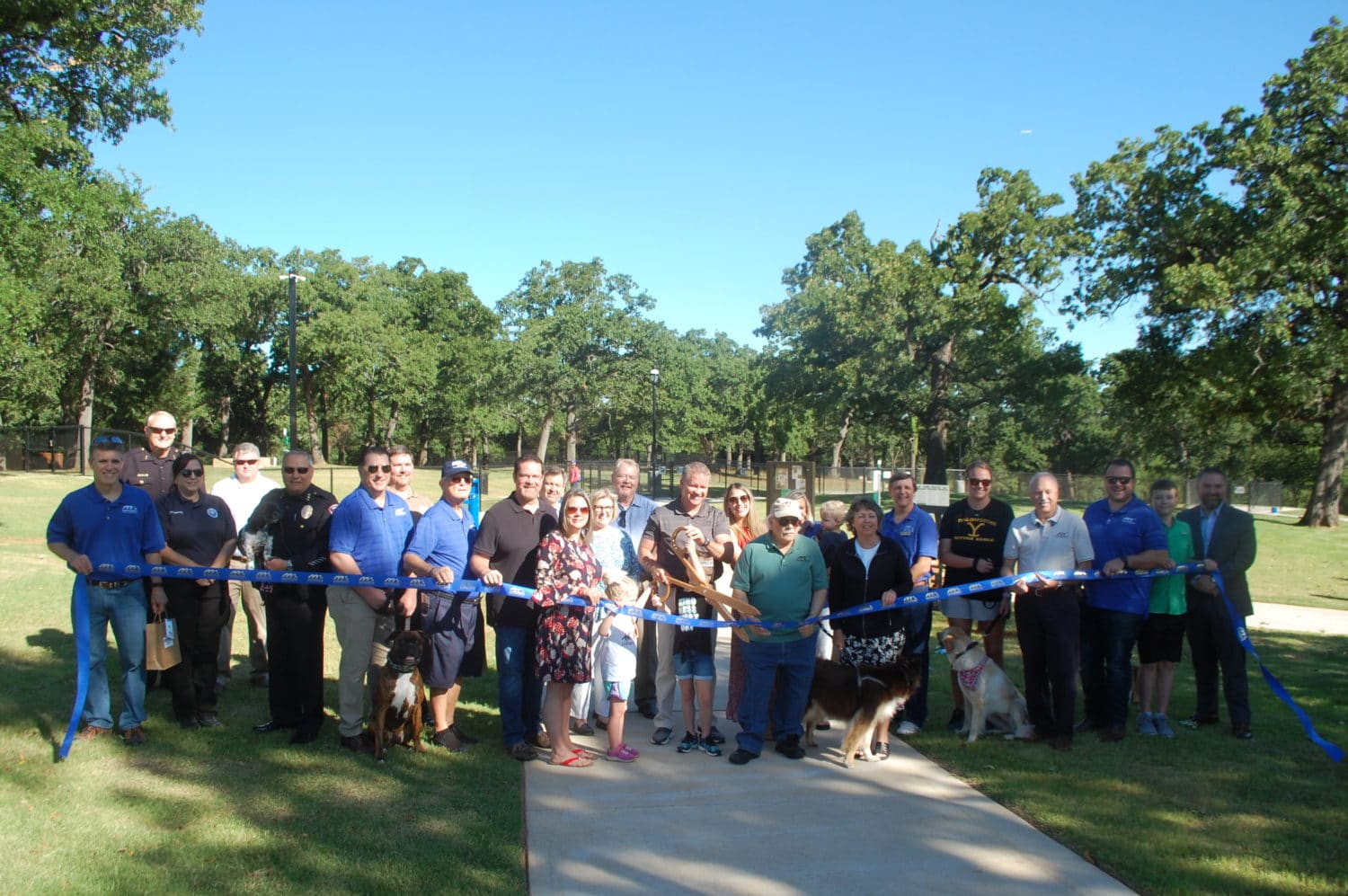 “It’s the No. 1 requested thing in my four years here,” Young said. “The dog park was in the 2010 master plan, and in 2016 funding was discussed,” Young said. “In 2017, we started looking at locations. To keep the cost down, we looked at properties already owned by the city. And the Man property came up.”

The city’s brand-new dog park is located on one of the oldest sites in town, the homestead of Ralph Man, one of Mansfield’s founders and namesakes who settled on the property in the 1860s.

The city purchased the 16-acre Man property, including his home, in 2014. Work is currently underway to restore the house, which the city hopes to open later this summer as a historical museum. The two properties will share parking.

“It’s an opportunity to connect our history with the future of Mansfield,” Mayor David Cook said at the ribbon cutting Wednesday morning. “It’s a great collaboration between the city and the parks.”

The city hopes to eventually connect the Walnut Creek Linear Trail to the back of the property, giving pups and people a chance to walk from the west side of Mansfield to the far east side on the trail.

But Wednesday was all about the pooches, and many of the council members brought their four-legged friends to get the first lope across the rolling hills.

“This park is special,” said Young, who has overseen dog parks in other cities. “The rolling terrain, the large shade trees and the history and ties to Ralph Man and his homestead, and it’s just a couple of blocks off historic downtown Mansfield. I think people are going to love it.”

The property is covered in massive post oaks, mesquite and blackjack oak trees, some that would have been there when Man and his family lived on the site. The trees were a huge bonus that most dog parks don’t have or have to bring in, Young said. In fact, because there are so many trees, no shade structures were brought in at all.

The cost of the park, including the parking lot that will be shared with the Man museum, was $850,000, Young said.

“Mansfield needed a dog park,” Fish said. “Dog parks aren’t for dogs, they’re for people. People socialize and it builds community. It’s good for the dogs to get off leash.”

The dog park is separated into four paddocks, ranging from 1 to 2 acres. The paddocks are designated for large or small dogs, Young explained.

“We will rotate those,” he said. “The two smaller ones in the front are flat and the ones in the middle have elevation change. You can get your exercise, for sure. Foot traffic beats the turf down so this gives us a chance to close one and re-sod.”

For people who have never visited a dog park, there are rules, including cleaning up after your pet, no toys or treats, no children under age 12 in the paddocks and no one under age 16 in the paddock by themselves. Little dogs can go in the big dog areas, but big dogs aren’t allowed in the little dog paddocks.

Meredith Minter, who founded SMASH (Supporting Mansfield Animal Shelter, has been campaigning for a dog park in Mansfield for at least eight years.

Place for pups to be dogs

On Wednesday morning, she looked around in awe.

“It’s a 20 on a 1 to 10 scale,” she said. “I love to see this. These dogs were all running around in the trees, they were just being dogs, hanging out with their friends.”

The park could get even better.

There’s a pond at the back of the property that the parks department hopes to incorporate for dogs that like to swim in a future phase of construction, Young said, plus a possible pavilion, dog features and expanded parking.

There is no fee to use the park, but dogs have their rabies vaccinations and be registered with the city of Mansfield, even if they or their owners aren’t Mansfield residents. A city license costs $15 per dog with a $5 discount for micro-chipped pets and another $5 discount for spayed or neutered pups. Animal control will conduct spot checks to make sure dogs have their city license and rabies tags, Young said.

Man’s Best Field Dog Park is at 610 W. Broad St. The park is open from 5 a.m.- 9 p.m. daily, except Tuesdays when it’s closed for maintenance, from March through October. From November through February, the park will be open from 5 a.m.-6 p.m.