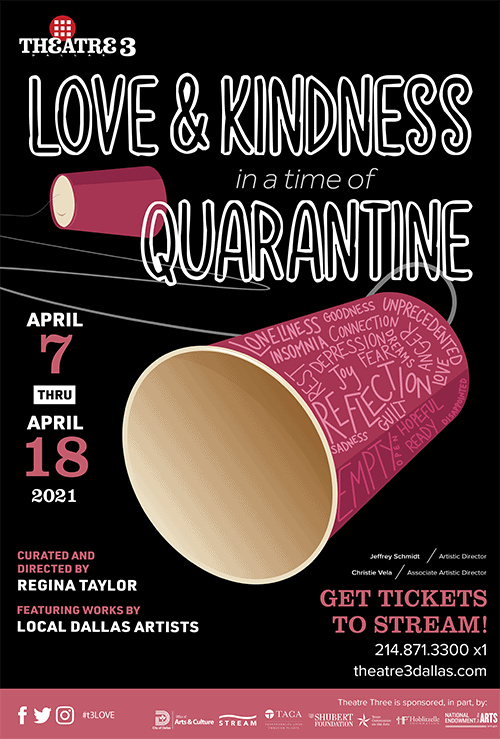 “Love & Kindness in a Time of Quarantine” is a timely compilation of songs and monologues curated and directed by renowned artist Regina Taylor for Theatre Three. The performances are available to stream virtually from April 7-18.

“Love & Kindness in a Time of Quarantine”

Theatre Three’s press release describes “Love & Kindness in a Time of Quarantine” as “a collective effort to evaluate what it means to be human during a global nightmare.”

Regina Taylor is an award-winning actor and playwright. She is best known to on-screen audiences for her role in the series “I’ll Fly Away,” “The Unit,” and “Lovecraft Country.” In addition to her film and television work, Taylor was the first Black woman to play Juliet in Broadway’s “Romeo and Juliet.” Other theater credits include “As You Like It,” “Macbeth,” “Machinal,” “A Map of The World,” “The Illusion,” and “Jar the Floor.”

Taylor won the L.A. Drama-Logue Award for her performance in “The Tempest.” Her credits as a playwright include “Oo-Bla-Dee,” for which she won the American Critics’ Association new play award. “Drowning Crow”(her adaptation of Chekhov’s “The Seagull,” was produced on Broadway by Manhattan Theater Club). Other works include “The Dreams of Sarah Breedlove,” “A Night in Tunisia,” “Escape from Paradise,” “Watermelon Rinds,” and “Inside the Belly of the Beast.”

Regina’s trilogy, “The Trinity River Plays,” premiered at Dallas Theater Center in 2010 and Chicago’s Goodman Theatre in 2011. Her critically acclaimed “Crowns” was the most performed musical in the country in 2006. She is an Artistic Associate of the Goodman Theatre.

For more information, or to purchase virtual tickets to the show, visit Theatre3Dallas.com. Performances are available for 24 hours, starting at 6 p.m. and ending at 5:59 p.m. the following day. Ticket buyers are limited to one viewing of the performance.