Fire Grounds Coffee can do both.

Fire Grounds Coffee is made by firefighters who roast their own coffee beans and use donations to provide it free to first responders.

Their mobile Coffee Truck was a hit when they first began traveling the Metroplex, providing fresh coffee to First Responders at different Fire Houses and police in different precincts.

A true Texan, Paul Clarke was born and raised in McKinney and a graduate of McKinney High School. He went into the Marines upon graduation and became an officer.

During is down time on a tour in Afghanistan, he planned his future. “Sitting around a few hours each day, with nothing to do, I came up with the business plan.”

Not Your Typical Brew

That nine-month deployment gave him plenty of time to work out the details, so he hit the ground running when he returned from his tour.

He began his Fire Fighting career at Station 24, and soon recruited the help of two Air Force captains, a fellow Marine captain, his best friend, his dad, and Kyle Lund, a fellow resident of Dallas and a Fire Fighter at Station 38 in Oak Cliff, to launch the company. They roast their beans from Colombia at a space in Tyler Station, in the old Dixie Wax Paper Company factory.

Now, whenever he’s not at the Fire Station, he’s roasting his coffee beans or promoting his coffee. It’s not your typical grocery-store brew. Clarke is proud of his high-grade coffee with hints of almond and caramel, “Because no matter how you roast, that flavor variety it’s going to taste great.”

There are currently six different flavors of the Columbian Roast such as “Rescue Roast Light Roast” coffee and “Bubba Roast Medium Roast” coffee. 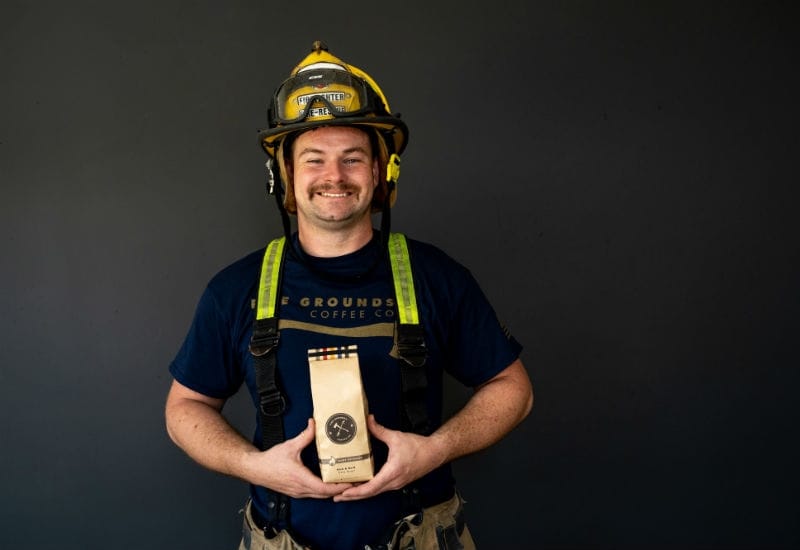 The video of the concept is on the company Facebook page and is a lesson in how to have fun. For instance, Paul makes fun of himself, right down to offering to strip off his shirt to get more customers. His co-worker and fellow firefighter quickly discourages this.

Meanwhile, all jokes aside, the company coordinates with local bakeries to provide fresh sweetness along with their locally roasted coffee. Fire Grounds promotes them on Facebook too: “Check out these amazing pop tarts by @the.butterfairy! These are available at the coffee shop every day. We have Strawberry, Amaretto Peach, Brown Sugar Cinnamon, and Cheese Guava! They taste the way you always wanted pop tarts to taste.”

In October Fire Grounds Coffee was creating “Birthday Cake Cold Brew Frappe,” one of the many coffee drinks served at the new coffee shop located in the beer garden located at 1300 South Polk St. in Oak Cliff.

Another favorite is the “Back The Blue Doughnut-Flavored” Medium Roast coffee created to honor Dallas cops. They describe it as “a jelly doughnut flavored medium roast variety, with just a hint of jelly doughnut with notes of caramel and almonds.”

Their coffee trailer was created for them by Stash Design, a sustainability-focused commercial and residential design firm located on Greenville avenue. Founded in 2011, STASH is dedicated to utilizing found and salvaged objects to create one-of-a-kind spaces for businesses, restaurants, and ventures both big and small.

The Trailer and its Fire Grounds Coffee were sidelined during Covid, but Paul believes it will be mobile once again in 2022. They have plans to travel to different parts of the Metroplex, to bolster the morale of the first responders at Dallas area Fire Stations. “We are a firefighter and veteran-owned coffee shop and roaster. So, of course we are going to hook up our fellow first responders! Any Firefighter, EMS or Police Officer that comes to our coffee shop in their apparatus gets a free iced or drip coffee.” Paul says proudly. “Why? Because heroes deserve good coffee.”

The dream is to get their coffee into every Fire Station in America.

A company priority is investing in the community. Fire Grounds donates a portion of its proceeds to Next Rung. The nonprofit provides mental health support for first responders and those suffering from PTSD. They’ve also donated to the Muscular Dystrophy Association to thank Dallas firefighters for raising funds during their annual April “Fill the Boot” drive. And the company also donates one bag of coffee to first responders for every five bags sold.

Oak Cliff residents have discovered the six brews, and many have signed on to be customers for life. Resident Amy Ero is one of  many in the area who recommends the brew: “Absolutely delicious coffee. Great product, plus you know that you’re supporting folks who are keeping our community safe and giving back. You MUST TRY IT!”

The company also sells cold brew in bulk. Our delicious cold brew is now available by the gallon! For more information email us at roasters@firegroundscoffeecompany.com