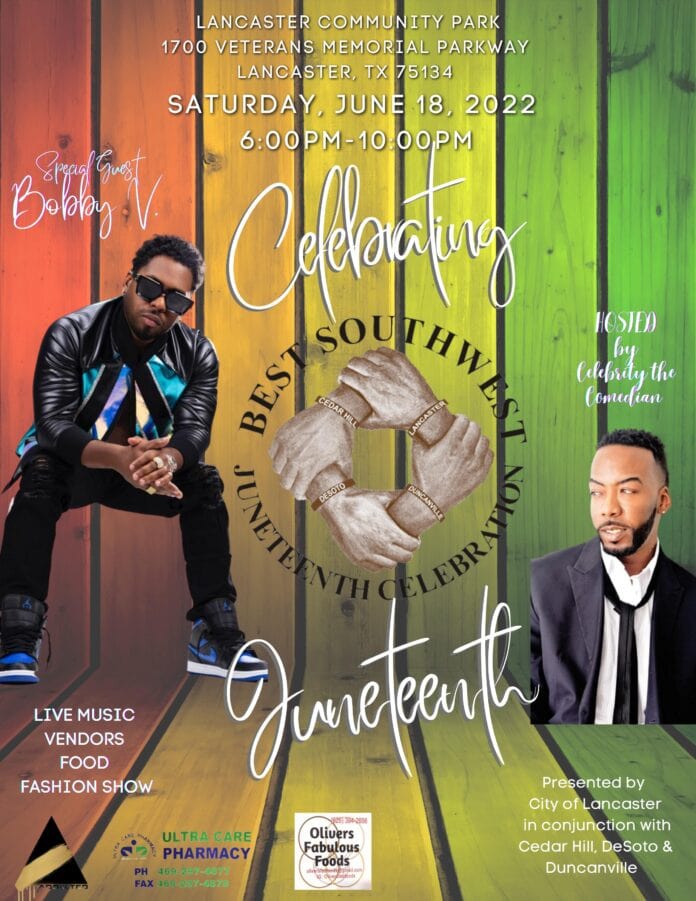 Inspired by Fort Worth’s own Opal Lee, one year ago President Joe Biden made Juneteenth a national holiday. While the African-American community had been celebrating the emancipation of slaves following the end of the Civil War since 1865, it wasn’t until June 17, 2021 that it became recognized federally.

Lee, now 95, had been advocating for the federal holiday for many years. In 2016 she marched almost 1,400 miles to Washington D.C. with 1.6 million signatures in support of her fight.

The celebration of the day first occurred in Galveston, and it has been a mainstay in Texas ever since. Once again this year, communities throughout the state, including several locally, will be joining in the festivities.

The Best Southwest Partnership Cities of Lancaster, DeSoto, Duncanville and Cedar Hill annually rotate their honoring of the day, with this year’s celebration to be held in Lancaster on Saturday, June 18.

The free celebration will take place from 6-10 p.m. at Lancaster Community Park, 1700 Veterans Memorial Way. It will be hosted by Celebrity the Comedian and will feature special guest R&B singer Bobby V. The evening will also include live music, vendors, food, a water slide, a fashion show and more.

In all, over 40 vendors had signed up to participate as of the writing of this article. In past years the average was around 30, said Lancaster Parks and Recreation Director Lisa Wube.

“And they’re still calling. We feel this event, with all the community coming together, the numbers will be like before the pandemic,” Wube said, noting that visitors in the past averaged between 8,000 and 10,000 annually.

The day is more than fun, however. It is an opportunity to learn more about the day and its significance in history. Also, several citizens from each of the four cities will be recognized for their contributions. They include Pamela Simon, Lancaster; Elma Zine Goodwin, DeSoto; Nancy Durant, Cedar Hill; and Tim Maiden and Brenda Williams, Duncanville.

“What a privilege and pleasure it is to be hosting this year’s Best Southwest Juneteenth Celebration in conjunction with our partnering Best Southwest cities of Cedar Hill, DeSoto and Duncanville. As we all know, Juneteenth is now a United States holiday that was originally celebrated in Texas on June 19, 1866. It marked the first anniversary of the day that African Americans had realized that they were free,” said Lancaster Mayor Clyde C. Hairston. “And, in knowing of their newfound freedom, they immediately began to celebrate with prayer, feasting, song and the dance of freedom.”

This is just one of several celebrations taking place in the area. Others include:

Saturday, June 18 from 10 a.m.-4 p.m. inside and outside at the Dr. Jim Vaszauskas Center for the Performing Arts, 1110 W. Debbie Ln. The free day day of celebration will include live performances, vendor booths, food booths, kids activities and most importantly, education on the importance of Juneteenth.

Also free on Saturday, June 18, the annual parade begins at 10 a.m. at City Hall (line up at 9 a.m.) and travels to the Dalworth Community, ending at Tyre Park. There will be free food, vendors, entertainment for the kids, and free swimming.