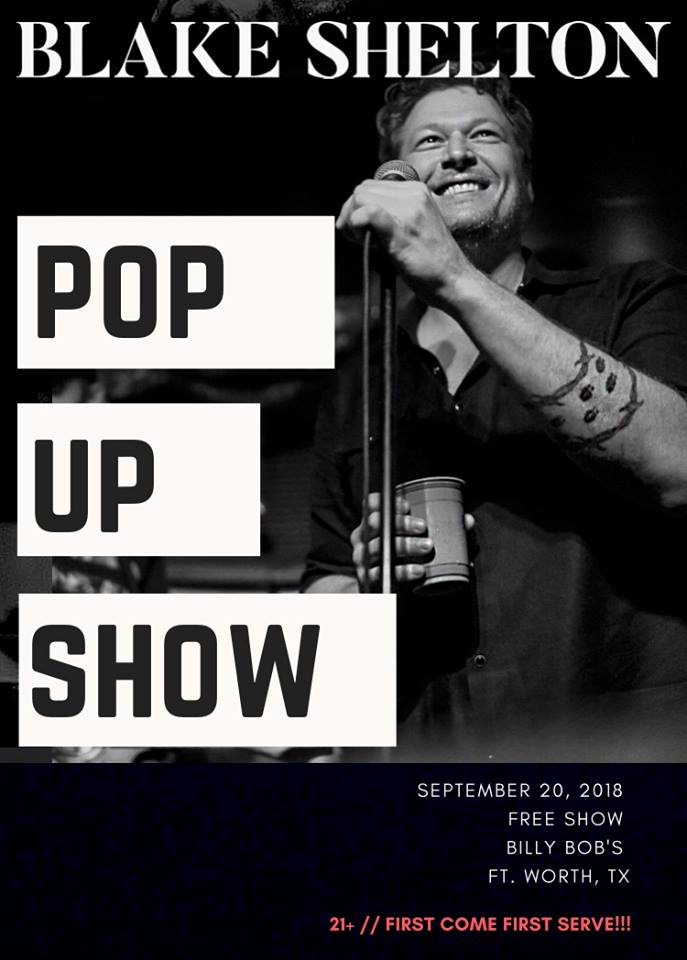 Blake Shelton will perform a FREE Pop Up Show at Billby Bob’s in Fort Worth this Thursday, September 20. Yes, its FREE.

ABOUT BLAKE SHELTON: It didn’t take long after Blake Shelton left his native Oklahoma to try his talent as a singer/songwriter in Nashville that he scored his first #1 record with “Austin”. It stayed at the top of the charts for 5 weeks, and this personable country boy has never looked back.

Since then he’s scored 24 number One hits and numerous other awards. He became a member of The Grand Ole Opry in 2010 As of 2017, Shelton remains one of only five country artists to have achieved No. 1 status on the Billboard Artist 100 chart, having charted all 156 weeks the chart has existed.

The CMA Awards also recognizes Shelton, in addition to George Strait and Vince Gill, as the record holders for the most Male Vocalist of the Year wins, as all three have each garnered 5 victories. In 2017 Shelton made People’s Choice Awards history by becoming the first country artist to ever win the all-genre category of Favorite Album over competitors Beyoncé, Drake, Rihanna and Ariana Grande. He also took home the trophy for Favorite Male Country Artist, marking his second consecutive win in the category. HW became the first artist in the history of the Country Air Check to chart six songs simultaneously, from his eleventh studio album Texoma Shore. Blake Shelton made People Magazine history by becoming the first country artist ever to grace the magazine’s Sexiest Man Alive cover issue. A Judge on The Voice since 2011- Shelton has coached the winner on 6 seasons.