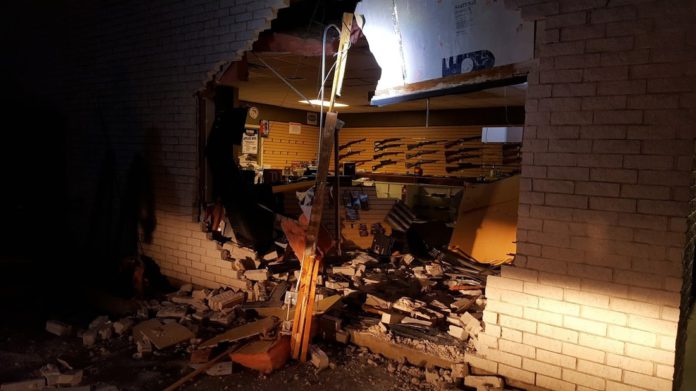 WAXAHACHIE—A Waxahachie gun store is in ruins after four Dallas teenagers ran a vehicle through the brick facade of the store and grabbed 17 firearms in all, some of them were high powered automatic weapons. Former Waxahachie Police Chief Chuck Edge calls the brazen robbery ‘a bold move.”

Around 2:45 a.m. on July 10 the suspects used a stolen pickup truck to power through the wall to gain entry into the store.

“I don’t know what drove them to commit the offense in the fashion that they did,” said Edge.

Thursday Waxahachie police with the assistance of Dallas police and the Bureau of Alcohol Tobacco and Firearms arrested Xavier Kirvin, 19, Virgillo Cherry, 17, Demarcus Dillard, 17, and Deontae Jennings, 17. Detectives are not releasing a lot of information at this time because the investigation is still ongoing.

“We did have some tips from the video we got released,” said Waxahachie PD Lt. Todd Woodruff. “There was some people that recognized one of those individuals and from there, it kind of broke wide open.”

Police have only recovered three of the guns that were stolen in the Waxahachie gun store robbery. Obviously just days after the horrific shooting of police officers in Dallas, Waxahachie police want to recover these weapons as soon as possible.

“I’d just like to have them off the streets,” said Woodruff. “Because with current things going on, it’s obviously not a good situation for those guns to be out there with folks that obviously didn’t get a background check.”

Due to the extensive damage, the Shooters Edge gun store will remain closed until repairs are made.