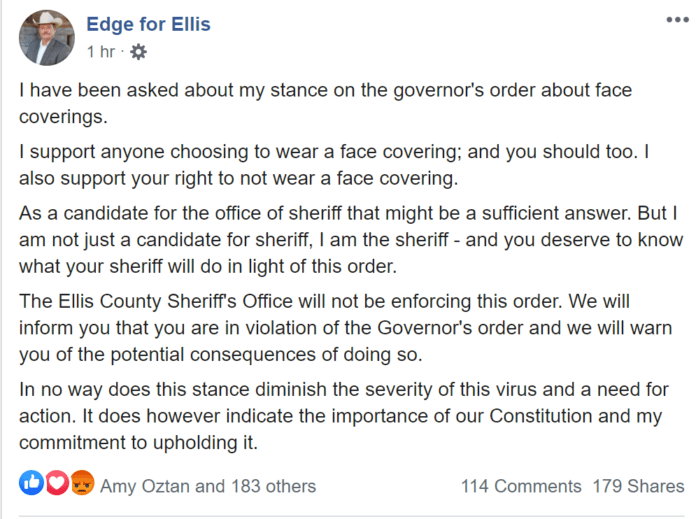 Its an election year, and some may argue that’s why mask wearing has become a political battlefield. Social media is full of arguments for and against wearing a face mask to slow the spread of COVID-19. Many of the arguments center on a person’s individual rights to wear or not wear a mask.

In Ellis County, TX, Sheriff Chuck Edge is in a runoff against his opponent Brad Norman. Tonight, he shared his thoughts on the mask order to his “Edge for Ellis” campaign page on Facebook.

“”I have been asked about my stance on the governor’s order about face coverings.

As a candidate for the office of sheriff that might be a sufficient answer. But I am not just a candidate for sheriff, I am the sheriff – and you deserve to know what your sheriff will do in light of this order.

The Ellis County Sheriff’s Office will not be enforcing this order. We will inform you that you are in violation of the Governor’s order and we will warn you of the potential consequences of doing so.

In no way does this stance diminish the severity of this virus and a need for action. It does however indicate the importance of our Constitution and my commitment to upholding it.”

At the time of this article the majority of the commenters support Sheriff Edge’s stance on Governor Abbott’s Executive Order requiring masks. However, there were a few that pushed back on the Sheriff’s stance. Phillip Dees, based on his FB profile photo is a supporter of Edge’s opponent, Brad Norman responded by questioning the politics of his stance.

His comment reads, “Odd. I thought the job of the Sheriff was to enforce the law, not interpret the law. Almost positive that is the job of the court system.
This gives you a great campaign boost and is the epitome of politics. Well done, you’ve satisfied your obligation to put politics first as almost every politician has done during this pandemic.”

Others asked, “what part of the Constitution are you specifically talking about?”

However at the time of this article, the majority of the responses were filled with thanks and praise. Focus has messaged the campaign of Brad Norman to see where he stands on the enforcement of Governor Abbott’s Executive Order GA-29.

This evening Brad Norman posted his stance on the mask mandate, and the role of law enforcement. You can read his response here.

We’d love to hear your thoughts, is it the place for law enforcement officers to decide whether to enforce a Governor’s order?