A Christmas gift has unwrapped a whole new life for Derek and Lashawn Hubenak.

“I got a beer kit for Christmas in 2012,” Derek Hubenak said. “The first batch was not so good, but my family drank it. There came a time people said ‘You make a good beer, you should sell it.’”

So that’s what Hubenak, his wife and their son’s former soccer coach, Justin Watson, decided to do.

After more than a year of planning, the Hubenaks and Watson opened Mansfield’s first brewery, Dirty Job Brewing, on July 5, 2017.

And Mansfield has been very welcoming, they say, from the city to the citizens.

“Probably the most important ingredient is water and Mansfield has awesome water,” Hubenak said.

Brewed more than 50 kinds of beer

Together, they have brewed more than 50 different beers, from darks for winter and wheats for summer, Watson said. They have seasonal beers and then there’s the favorites that they always have on tap.

The most popular is the Short Stack, a maple pecan porter with “a smooth great flavor,” Watson said. “Even people that don’t drink dark beer love it.”

The Agave Davida is a blueberry agave wheat that’s lighter and also very popular, he said.

“If you mix the two, we call it a blueberry pancake because it tastes like pancakes,” Watson said.

Other beers on tap at Dirty Job include Better Off Red, a red ale with graham cracker; IP Ain’t, a cucumber IPA; Raspberry Beret, a raspberry hefeweizen: OMG Blonde, a honey blonde ale; and Maize Runner, a cream ale with flaked corn.

Dirty Job has already started brewing three different pickle beers for the World’s Only St. Paddy’s Pickle Parade & Palooza on March 13-14. This year’s special pickle beers will be The Big Dill, a pickle wheat beer; What’s the Dill, Yo?!, a pickle IPA; and Pickle Bomb, a spicy pepper and pickle blonde ale.

Brewing takes seven to 10 hours, then the beer has to age from a couple of weeks to a year.

The key to making beer is consistency, Watson said.

“(Inconsistency) is the fastest way to get rid of customers,” he said. “If they love it one time, they have to love it the next time.”

But it’s not just the beer that’s bringing in the customers.

In September, Dirty Job started serving food and now offers a full lunch and dinner menu with everything from pretzels to pizza. But even that isn’t the biggest draw, customers say.

“I like the people,” said Bryan Russ of Mansfield. “We’ve made good friends that are almost like family. It’s almost become a home away from home. The beer’s pretty good, too.”

Dirty Job has become a downtown meeting place for families, friends and husbands waiting for their wives to finish shopping. And that’s just what the owners wanted. They host Friday night trivia, a book club, yoga, live music on Thursday nights, comedy nights and even Girl Scout cookie pairings with beer. There’s board games and sports on the flat-screen TVs.
“If you’re just open and not doing anything special, why be open?” Hubenak asked. “We want to be a cut above and a step ahead.”

Lashawn Hubenak doesn’t get very involved in making the beer, but she pours a lot of it and she likes fostering the sense of community.

“People have a place to come and hang out,” she said. “It’s diverse.”

Mansfield has made them feel at home

The trio, who all live in Arlington, feel at home in Mansfield, they say, and appreciate how welcome the city has made them feel.

“People have been phenomenal,” Derek Hubenak said. “We’ve had days when it didn’t look like we would do that much business and people would rally. This has become a meeting place.”

After adding the kitchen, Dirty Job has gotten even busier, which means the co-owners are all stretched thin. They’ve recently added four part-time employees.

All three owners have kept their full-time jobs – Derek Hubenak, 42, is an administrator at Tarrant County College, Watson, 44, is a licensed electrician, and Lashawn Hubenak, 44, is in quality control for a nutraceutical company, which has come in handy in developing their beers. 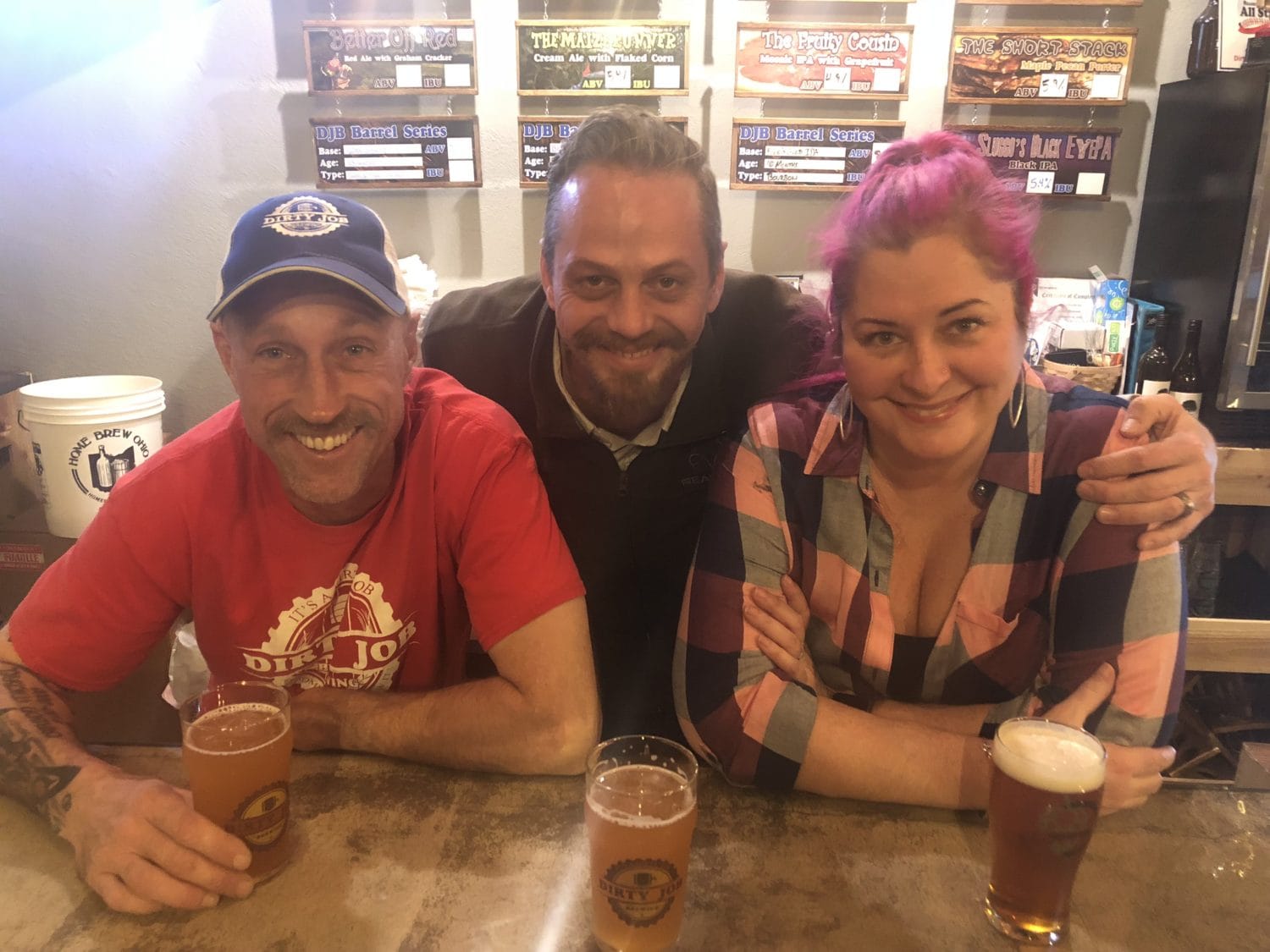