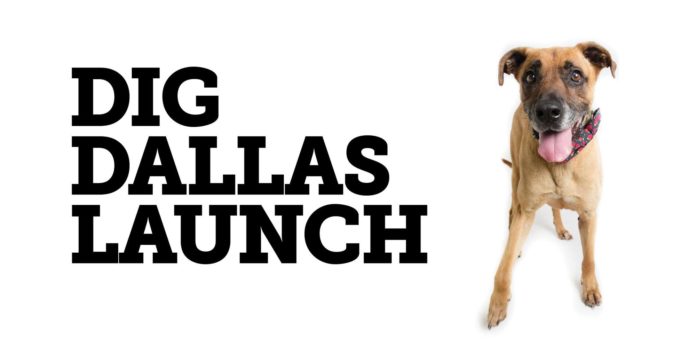 Not too long ago a friend started dating a new guy. They went out a few times and things seemed to be going great. A few weeks of seeing each other, he came to her house for a movie and pizza kind of night, and that’s when he met the dog. Not a fan of pets, when he said goodbye that was the last time they saw each other. That’s when she updated her online dating profile with a “must love dogs” statement and photos of her lab.

Dig is hosting a launch event at WeWork Thanksgiving Tower in Dallas tomorrow Thursday, August 8th from 6 PM – 8 PM. Entry, wine, beer, and treats are FREE when you download the app on the App Store. Our dog-friendly party also features dozens of local dog businesses, rescues and the SPCA of Texas! Remember to RSVP to save your spot.

More than 100,000 people have turned to Dig to find someone who loves dogs as much as they do. The app has a ton of unique features, such as suggesting various local dog-friendly locations to help you plan a perfect date without having to leave your pup at home!

The founders wanted to create an app for those passionate about their dogs. From the Dig website: ‘After a relationship ended when a guy refused to let the world’s cutest dog (Layla) in his apartment, Casey wanted to be sure she could find someone who would love her dog as much as she does. On Dig, guys can’t pretend to be dog owners by posting pictures with other people’s dogs just to get the conversation going like they do on other dating apps. Dig is a community of people who care deeply about dogs, whether they’re dog owners or want to get a dog with someone in the future. To dog people, it doesn’t matter who starts the conversation, what mutual hobbies they have, or who they know in common. If the people aren’t on the same page about the dog(s), they just aren’t compatible.’