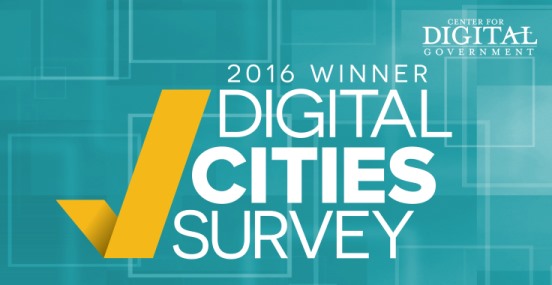 City of DeSoto IT Recognized For Technology

“This year’s top digital cities are using technology to ensure citizens can meaningfully interact with city government more easily than in any other time in history,” said Todd Sander, executive director of the Center for Digital Government. “From open data portals to enhanced connectivity and mobile platforms, this year’s top-ranked cities are actively promoting transparency, encouraging citizen participation and making it easier for people to do business with government. Congratulations to the winners!”

The City of DeSoto has made great strides to improve the way our residents interact with their city’s government. “DeSoto’s Digital Cities award is made possible by an organization-wide culture of innovation and creativity,” said Tom Figert, Director of Information Technology for City of DeSoto. “We are the first city in our population category in the state since 2011 to receive this award. I’m very proud of the IT staff, the technical acumen of colleagues in other departments, and the expert guidance of our vendor partners. Together, we’re cultivating an environment of efficiency and productivity, expert support, and transparency that we think will serve our citizens well in the years to come.”

DeSoto was recognized for making strides in its transparency. Beginning with fiscal transparency, city officials have released a spending portal. The portal makes it simple for residents to identify exactly where their taxes go. DeSoto has been awarded for its transparency by the state comptroller. In 2014, DeSoto was designated a Platinum Member.

“Over the past six years, our ultimate goal has been to create an unprecedented level of financial transparency and technology that will significantly improve processes in an effort to enhance our public services,” said DeSoto City Manager Tarron Richardson, Ph.D.

In addition to its commitment to transparency, DeSoto has taken the time and effort to provide many services online. One of the most innovative ways this has been realized is through its municipal e-court system.

Since July, all citations were accompanied by a QR code, which led the users to a virtual courtroom for arraignments.

Throughout the year, the City’s tech administration has focused on mobile adoption and optimization. DeSoto offers three other apps:  for City services, police and a third that allows for easy submission of service requests.

“I am ecstatic, but not surprised, that our IT Team has been named among the country’s Top Digital Cities in our population category by The Center for Digital Government,” said DeSoto Mayor Curtistene McCowan. “I commend our IT Team on its exemplary efforts to utilize metrics to analyze and evaluate DeSoto’s initiatives designed to improve the quality of life for our citizens. Congratulations on behalf of the City Council and the residents of our All America City!”