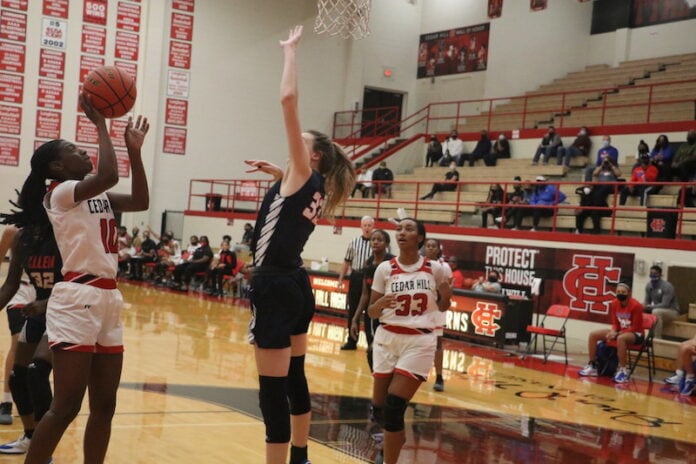 “Just making the playoffs is not good enough – going three rounds deep is the minimum,” Cedar Hill head girls basketball coach Nicole Collins said. “Our goal is to win State, and that’s a process of a journey and building.”

The Lady Longhorns began the Regional Quarterfinal feat a year before Collins arrived and have continued the success during her tenure.

Collins, a former Baylor University point guard, has 228 career victories and is on pace for 250 wins this season.

Last season, Cedar Hill overcame more than anytime over the past decade. They graduated four starters from a Regional Finalist Team and had to quarantine twice due to the COVID-19 Pandemic. Several other games were canceled or postponed due to their opponents dealing with COVID-19.

Playing In The “District of Doom”

Still, the Lady Longhorns managed to finish 17-9, defeat a trio of ranked opponents (Arlington Martin, Mansfield and Red Oak) and reach the Regional Quarterfinals where they lost to then-defending 6A State Champion, Duncanville, 69-53.

“The word of the season was ‘adjust’,” Collins said. “Everything was out of our control, and we were blessed just to have an opportunity to step on the floor. I told our team that the team that was able to adjust would go the farthest.”

Last season, that team was DeSoto, which won the 6A State Championship.

Collins is confident that Cedar Hill will be able to compete with both Duncanville and DeSoto in 6A-11 Competition this season.

“They call it the District of Doom for a reason – it is a chance to be prepared for the playoffs,” Collins said.

Collins said the group had a chance to observe the 2020 Regional Finalist Team as freshmen and contribute as role players last year as sophomores.

Collins said freshman point guard Vivian Franklin will be “the next best player out of Cedar Hill.”

Cedar Hill will open the 2021 season on Friday at Arlington Bowie.

“We have to build toward winning state with everything we do – with every warmup and every drill,” Collins said. “Our motto for this season is #OneTeamOneVisionOnePath. People can’t ever overlook Cedar Hill.”