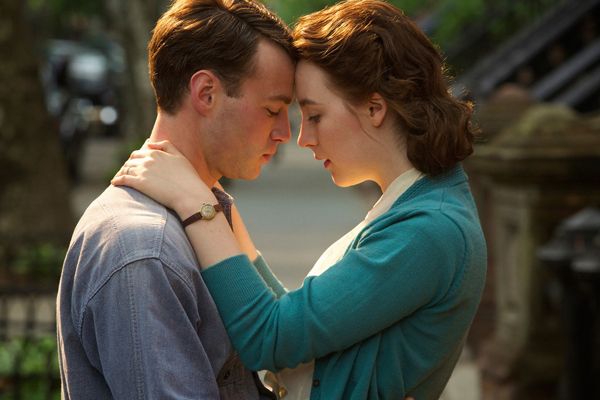 Brooklyn is a romantic drama written by Nick Hornby, directed by John Crowley, opening in area theaters Friday. Rated PG-13 for brief strong language and some sexuality, the film runs 1 hour and 23 minutes.

The best thing about Brooklyn is its star, the delightful Saoirse Ronan, an Irish actress who is perfectly cast as Eilis Lacey. Ms. Ronan was nominated for an Oscar for her scene-stealing role in “Atonement” in 2007, and she also gave a memorable performance in the title role of “Hanna.”

At the start of “Brooklyn,” we watch young Eilis packing for the long ship voyage to America. Her self-sacrificing older sister Rose (Fiona Glasscott) had schemed and saved to send her sister to Brooklyn, where there were more opportunities than could be found in Ireland in the 1950s.

Upon arrival, the wide-eyed immigrant is under the watchful supervision of kindly Father Flood (Jim Broadbent), who places her with Mrs. Kehoe (Julie Walters) at her boarding house for young women. He also finds her a job at a department store and helps her enroll in an accounting course so she can pursue a career as a bookkeeper.

Everything is going according to plan, but the immigrant still suffers terribly from homesickness. Eilis spends most of her time writing letters home to her mom (Jane Brennan) and Rose.

Her life takes a turn for the better when Eilis meets a young Italian-American (Emory Cohen) at a Parrish dance. He is instantly smitten with her, and his large and lively family also welcome her with open arms. The chemistry between these two young lovers sizzles, and they seem to be headed for a wonderful future together.

However, a tragedy compels Eilis to return to Ireland, where she is torn between family obligations and the rosy new life she had planned in Brooklyn. Old friends and a potential new lover, Jim Ferrel (Domhnall Gleeson) make Eilis wonder if she wouldn’t be better off staying in the old country.

While the pace of the film is slow, even leisurely, this helps the audience become more fully invested in these characters. Especially Eilis, whose humanity and heart are shown through her expressive eyes. The slower pace also allows time to dwell on some fascinating cinematography. The bustling city scenes in Brooklyn and the more picturesque Irish village scenes are beautifully filmed.

“Brooklyn” provides an in-depth look at immigrants as seen through the eyes of one young Irish lass, what they look for in their new lives and what they leave behind. And it’s easy to see how difficult it would be to choose between the two romantic leads, since both young men are kind, ambitious, and crazy about Eilis.

The conclusion of the film was every bit as satisfying and moving as one of my favorite Jane Austen stories. Which is high praise indeed from this reviewer!