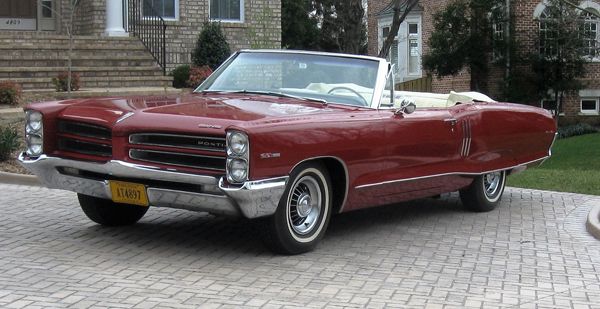 Leo Cummings Jr. enjoys attending automobile auctions, not to participate in the bidding, but to view the beautiful automotive art on display. In 2008, at an Atlantic City, N.J., car auction, Cummings saw a 1966 Pontiac 2+2 convertible painted red that arrested his attention.

He couldn’t resist bidding on the car, but another bidder was similarly smitten and outbid Cummings. However, the next day this Pontiac was back on the auction block. The gentleman with the winning bid saw something else he wanted, so the 1966 Pontiac 2+2 convertible went back on the block. Cummings was more than pleased to take the Pontiac off his hands at below what the previous auction price had been.

Cummings returned to his home near Mt. Vernon in Virginia to await the truck delivering his 17-foot, 11-inch-long Pontiac. Upon arrival, the 4,030-pound convertible was rolled off the truck on its 121-inch wheelbase.

Under the expansive hood is the 421-cubic-inch V-8 engine capped with a trio of two-barrel Rochester carburetors that delivers power to the 14-inch rear drive wheels. The wheels on the Pontiac have an unusual lug nut pattern. The eight lug nuts are positioned on the perimeter of each wheel. A four-blade fan draws air through the radiator to control engine temperature.

When new, the base price of the 1966 Pontiac 2+2 convertible was $3,602. That was a lot of car for the money during the era when Pontiac’s slogan was, “We Build Excitement.”

The instruments in the handsomely appointed interior are all canted toward the driver for the benefit of the driver behind the two-spoke steering wheel. Parchment-colored upholstery is in sharp contrast to the black carpeting. The convertible top is white and holds the glass rear window.

The convertible top is power-assisted, as are the steering, brakes, windows and the radio antenna on the right rear fender. A speaker in the back of the rear seat broadcasts sound from the AM/FM radio.

Thoughtful touches abound on the 1966 Pontiac such as the remote control left side mirror, the flush-mounted four tail/brake lights, and the two backup lights in the rear bumper above the dual exhaust tips. Access to the gasoline tank is through the filler tube hidden behind the rear license plate in the rear bumper.

Not long after acquiring the Pontiac, Cummings was enjoying a top-down late afternoon cruise on a scenic country lane when a young deer suddenly ran out of the woods and hit the left side of the car just aft of the door. The deer regained his footing and scampered off into the woods while Cummings stopped to ascertain the damage to his car. Thankfully, there appeared to be no dents nor damage to his car. Only a short strip of trim near the left fender skirt was missing.

He slowly drove back by the collision scene while shining a flashlight beam on the side of the road. Finally he saw the shiny strip of trim that had been knocked off his car by the deer. It was undamaged. Since then Cummings has had the engine rebuilt and has performed what he describes as a “body lift” restoration.

Now that Cummings has returned his “Wide Track” Pontiac to good health he has driven it only 3,000 miles.

Would you like to be considered for a Classic Classics article? E-mail your jpeg image, plus brief details and phone number. You may also submit an image of you with your treasured classic car. Type “Classic Classics” in subject box to info@motormatters.biz.