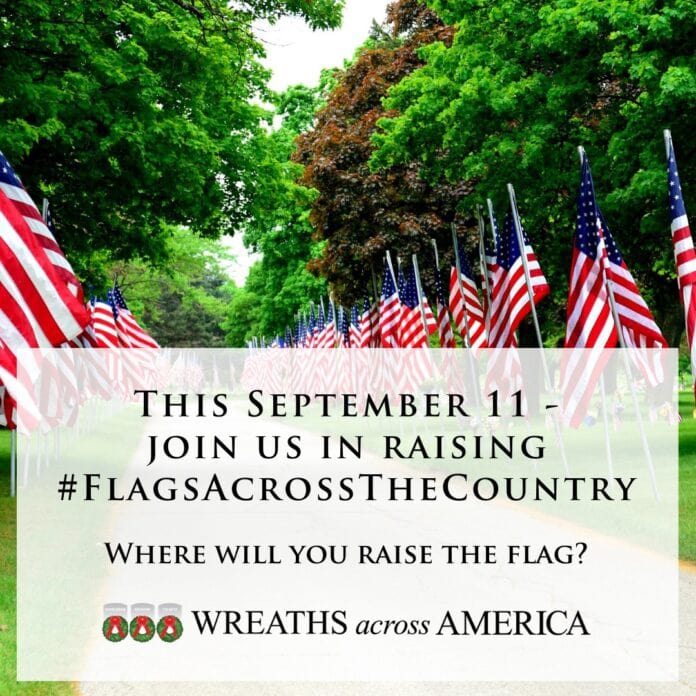 On September 11th, Wreaths Across America wants to honor the “Freeport Flag Ladies” and those affected by 9/11, by uniting in national flag waving

At 8:46 a.m., On Tuesday, September 11th, 2001, five hijackers took control of American Airlines Flight 11 and flew it into the heart of New York City and the northern facade of the World Trade Center’s North Tower (1 WTC).

At 9:03 a.m., five other hijackers flew United Airlines Flight 175 into the southern facade of the South Tower (2 WTC).

At 9:37 a.m., another five hijackers flew American Airlines flight 77 into the western facade of the Pentagon in Arlington County, Virginia

Following the events of 9/11, three patriotic women (Elaine Greene, Joann Miller and Carmen Foote) were moved to find an old American flag they had stored at home and stand on a hill in Freeport, Maine, waving that flag to honor victims. These women became nationally known as “The Freeport Flag Ladies,” and proudly hoisted the Stars and Stripes every Tuesday morning for the following 18 years.

After they retired on September 11, 2019, (their last 9/11 remembrance) the following Tuesday, September 17, 2019, Wreaths Across America took the helm and continued the weekly flag waving tradition along US Route 1 in Jonesboro, Maine, on land donated by the organization’s founder Morrill Worcester leading to the new Acadia National Cemetery.

Since that time Mr. Worcester has added a mile stretch of American flags (105 in total) on both sides of the road that lead to the entrance of Acadia National Cemetery which will open to the public for the first time on Saturday, Aug. 29, 2020. Mr. Worcester also donated the land for this new National Cemetery to be built in his hometown.

“Each Tuesday, we are joined by dozens of members of the local community and curious people stopping to be part of something meaningful,” said Karen Worcester, executive director, Wreaths Across America, and wife of Morrill Worcester. “Especially over the last six months, this flag waving has taken on new meaning for us all and given a spark of hope and patriotism during this difficult time in our country.”

Participants are encouraged to take video and pictures of their participation in the national flag waving and share them with Wreaths Across America, their family and their friends to help REMEMBER, HONOR and TEACH the generation born after 9/11, how hard times can strengthen us as a nation. Please use the hashtag #FlagsAcrosstheCountry and #AmericaStrong when posting on social media and tag the Wreaths Across America Official Facebook page.

“My husband and the community’s commitment to the mission and continuation of this important weekly tradition has taken on the additional meaning of American unity during this uncertain time,” added Karen. “I hope Americans will see this as an opportunity to not only honor those directly affected by 9/11, but also to follow in the footsteps of “The Freeport Flag Ladies.”

Wreaths Across America is the non-profit organization best known for placing veterans’ wreaths on the headstones of our nation’s fallen at Arlington National Cemetery. However, the organization, in total, places more than 2 million sponsored wreaths at over 2200 participating locations nationwide and offers other programs throughout the calendar year.

These programs remember the events of 9/11 in their own way such as The Mobile Education Exhibit which will be visiting Kentucky in September and will join in the national flag waving effort. Radio host  Michael W. Hale of Wreaths Across America Radio will hold on-air tributes, and the on-line store will be selling #AmericaStrong signs made by the brother of “Lone Survivor” Marcus Lutrell (who gave a special family message during the Wreaths Across America Virtual Concert now streaming on Showcase NOW).

You can sponsor a wreath for $15 at https://www.wreathsacrossamerica.org/. Each sponsorship goes toward a fresh balsam veteran’s wreath that will be placed on the headstone of an American hero as we endeavor to honor all veterans laid to rest on Saturday, December 19, 2020, as part of National Wreaths Across America Day.