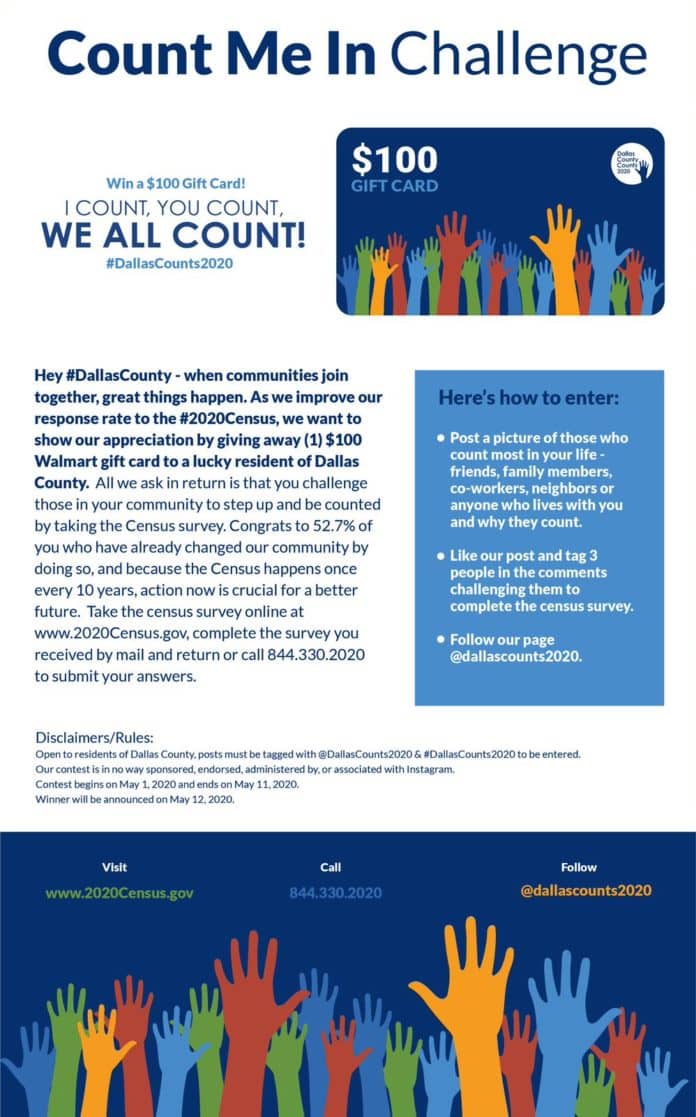 DESOTO – It is free, it is easy, and it is your responsibility as an American.

According to Census data, the census information you provide means much for your local city.

For example, the Census will not only help determine the number of Congressional seats appropriated to each state, but will also determine Congressional district boundaries, Texas state legislature districts, school districts, voting precincts, the allocation of more than $675 billion through 132 government programs, including those for early childhood education (Head Start), healthcare (Medicare), highway spending, and the Supplemental Nutrition Assistance Program (SNAP).

“There has never been a more important time for all Americans of every ethnicity to come together and complete the 2020 census forms,” said District 109 State Representative Carl Sherman. “In mid-March, homes in America began receiving the invitation to complete the 2020 Census. Taking part in the Census this year is important because it affects the money your community will receive in the future for public services as diverse as schools, hospitals and even fire departments. Census participation will also play a key role in new homes and businesses in your area and even how your city and the state is represented in government.”

The 2020 Census also calculates education information, unemployment, crime, and poverty rates. These are all important factors that go into future area funding.

The Census is confidential

Where does your city rate in responses?

City of Lancaster Mayor Clyde Hairston said “It is incredibly important each household completes their 2020 Census. The data collected during the Census will affect our communities for the next 10 years. I want to thank everyone who has already completed their form. As of April 15, 2020, the 2020 Census website is reporting a 51.8% response rate for the City of Lancaster. Compared to the Texas response rate, our City is 6.7% above the curve. Fill out your form today to help shape the future of your community.”

From a national standpoint U.S. Department of Commerce Secretary Wilbur Ross and U.S. Census Bureau Director Steven Dillingham released a statement in April that reported over 70 million households have responded so far, representing over 48% of all households in America.

The U.S. Constitution mandates a census of the population every 10 years. The 2020 Census counts everyone who lives in the U.S. as of April 1, 2020.

“Today it is very important to stand up and be counted,” concluded Rep. Sherman.