Home Entertainment PBR Bucks Back to Fort Worth and Cowtown Coliseum on June 4... 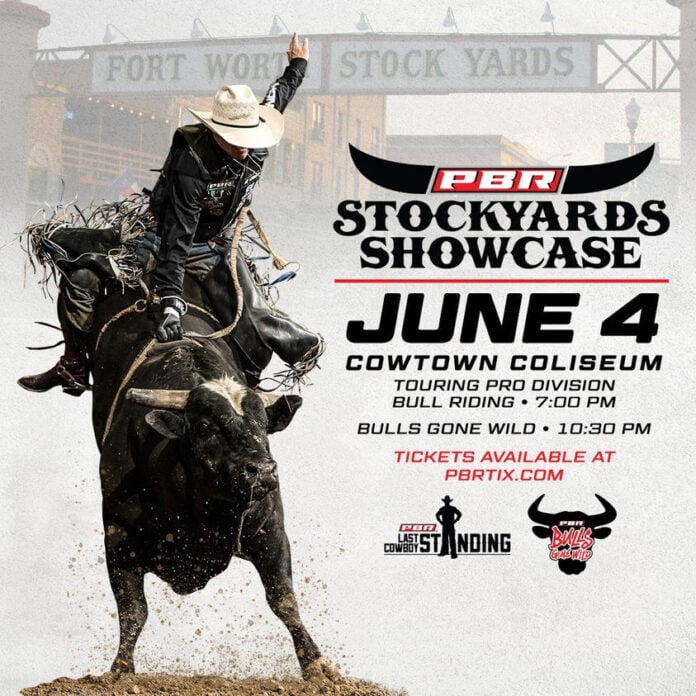 FORT WORTH, Tex. (May 21, 2021) – Iconic Cowtown Coliseum will once again welcome PBR (Professional Bull Riders) action to Fort Worth, hosting the league on June 4 for the PBR Stockyards Showcase, a double-header event including a Touring Pro Division stop and debut of a new late-night bullfighting extravaganza.

The Stockyards Showcase will begin at 7:00 p.m. CDT on Friday, June 4 with a PBR Touring Pro Division event, featuring 30 of the league’s top bull riders from across the globe attempting some of the rankest bulls on the planet.

After all competing riders attempt one bull each in Round 1, the Top 10 will advance to the championship round for one additional out and chance to clinch the event title.

With a fierce 2021 PBR World Championship race already brewing, the world points awarded in Fort Worth will be critical for each rider’s efforts to qualify for the 2021 PBR World Finals and contend for the coveted gold buckle.

As an added layer of excitement, the Touring Pro Division event will also be a stop for the 2021 Million Dollar Bull Team Challenge. In this revolutionary concept in western sports, the competing bovine athletes at the 2021 PBR Stockyards Showcase will be bucking in teams of four, vying for a separate prize purse.

This new specially formatted event is a bullfighting extravaganza that brings together celebrity guest stars, the world’s best freestyle bullfighters, and hilarious game show challenges in-front of a live audience. The blend of late-night comedic antics and dazzling feats of athleticism will be unlike anything you’ve ever seen.

A unique stop on the league’s 2021 schedule, the PBR Stockyards Showcase will unfurl inside a venue with deep roots in PBR history.

The PBR later returned to Cowtown Coliseum at the end of December for the eventual 1994 season-launch event, won by league co-founder Clint Branger (Roscoe, Montana).

Tickets for the 2021 PBR Stockyards Showcase are on-sale now and can be purchased at PBRTix.com or through PBR Customer Service by phone at 1-800-732-1727. Eventgoers are encouraged to purchase their tickets early, with the cost of all admission levels for adults increasing by $5 on event day.

General Admission tickets for the Touring Pro Division event start at $40 for adults and $20 for children, taxes and fees not included. For a more close-up experience, fans can also purchase Gold and VIP Box Seats starting at $65.

General Admission tickets for PBR Bulls Gone Wild start at $20 for adults and $10 for children, taxes and fees not included. Gold and VIP Box Seats will also be available for the bullfighting and western entertainment extravaganza, starting at $35 for Gold Box Seats and $65 for VIP Box Seats.

The 2021 PBR Stockyards Showcase will abide by all COVID-19 protocols set fort by local authorities.

PBR is the world’s premier bull riding organization. More than 500 bull riders compete in more than 200 events annually across the televised PBR Unleash the Beast Tour (UTB), which features the Top 35 bull riders in the world; the PBR Pendleton Whisky Velocity Tour (PWVT); the PBR Touring Pro Division (TPD); and the PBR’s international circuits in Australia, Brazil, Canada and Mexico. PBR’s digital assets include RidePass, which is home to Western sports. PBR is a subsidiary of IMG, a global leader in sports, fashion, events and media.

DFW Area 4th of July Activities For The Family

Powered by Convert Plus
28 shares