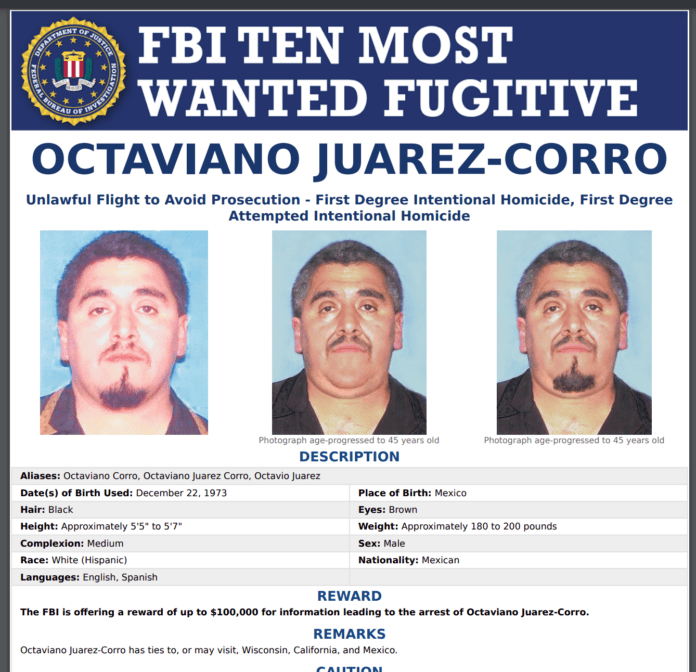 Fugitive Believed To Be In Mexico

A man who allegedly killed two people and injured three others when he brazenly fired multiple shots into a crowded Milwaukee park has been added to the FBI’s Ten Most Wanted Fugitives list. The FBI is offering a reward of up to $100,000 for information leading directly to his arrest.

Authorities allege that on the afternoon of May 29, 2006, Juarez-Corro entered South Shore Park on the banks of Lake Michigan, where hundreds of people were gathered for a Memorial Day picnic, including many families with children. Juarez-Corro approached a friend of his estranged wife’s and began a conversation. Juarez-Corro and his wife were reported to be in the final stages of their divorce. The couple share a daughter, who was 3 years old at the time of the shooting.

“They were reportedly going through a difficult time in sharing visitation with their daughter,” said Special Agent Steve Whitecotton, who is investigating this case out of the FBI’s Milwaukee Field Office.

Shortly after entering the park, Juarez-Corro reportedly pulled out a gun and began firing. Two people were killed. Juarez-Corro’s wife suffered two gunshot wounds in the chest but survived. Two others were also injured, one of them gravely.

“The fact that this individual would be so reckless in an area where families were gathered to celebrate—and in front of his 3-year-old daughter—is just utterly unacceptable,” said Whitecotton. “He needs to be held accountable and brought to justice.”

Juarez-Corro is now 47 years old. He is believed to weigh between 180 and 200 pounds and has brown eyes and dark hair, which may be graying. He usually wears a mustache and sometimes a beard. He is between 65 and 67 inches tall.

“He needs to be held accountable and brought to justice.” Steve Whitecotton, special agent, FBI Milwaukee

Anyone with information on Juarez-Corro’s whereabouts should call 1-800-CALL-FBI, or contact your local FBI office or the nearest American Embassy or Consulate. You can also submit a tip online to tips.fbi.gov.