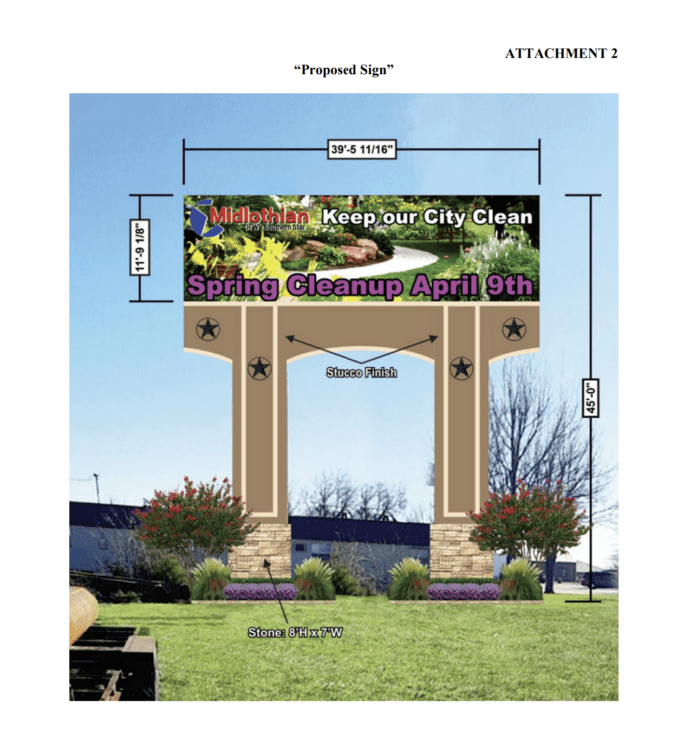 MIDLOTHIAN – The Midlothian City Council denied a request by local business owner Doug Hunt of Access Storage Tuesday night at its city council meeting. Hunt explained that the proposed sign, an electronic message sign on a billboard, would be an immediate asset to local businesses. The use of the signage would be for both on-site and off-premise advertising.

Hunt was requesting the sign, which he said he believed could make a difference in highlighting the importance of shopping local as well as highlighting other community activities and recognitions.

The proposed sign request was for approximately 11-feet and 9 1/8-inches in height, and 39-feet and 5 11/16-inches in length with the height not exceeding 45-feet. It was proposed the sign would be located at the southern end of the property at 1630 N. U.S. Highway 67.

The signage would be utilized 24 hours a day with continuous screen change every eight to nine seconds, dimming in the evening after dark.

While the amendments being requested were outside the realm of allowable uses in the city, Midlothian Chamber of Commerce President Melissa Shook was on hand to speak on Hunt’s behalf emphasizing the necessity of shopping local.

The Planning and Zoning Commission denied the request in November 7-0 and staff recommended City Council do the same.

Hunt, who spoke at the city council meeting said he was amenable to lowering the sign height to 35-feet. He also told council he would be happy to make other accommodations as needed.

Council made a first motion, which resulted in a 4 – 3 vote to deny.

More conversation then continued among council and with City Attorney Joe Gorfida regarding how a local business is defined – such as if the local McDonald’s is a “local business” since it isss in the city and owned by a franchisee. Then, a second motion was made by Place One member Wayne Sibley to deny the request.

Sibley said his reasoning was because it did not meet the qualifications for signage in the city. This vote was again to deny the request a 4-3 margin.

Before the final vote it was noted that there had originally been a sign in the same location, but Hunt had it removed because of its derelict appearance. He expected he would not have a problem replacing that sign.

Discussion on this item began on July 14, 2015, when the subject property was rezoned to Planned Development and it was noted “billboard signage is not mentioned as an allowable use.” On May 10, 2016, the application to allow billboard signage at the subject property was presented to City Council and denied unanimously. At that time the proposal exceeded the current proposal by 10-feet in total height.

Then on November 16, 2021, the Planning and Zoning Commission recommended denial of the same request as the one that was requested Tuesday night. Then Council again denied same on December 14, 2021.

Place 2 Walter Darrach asked a number of questions regarding the sign and the importance of its addition. Place 3 Anna Hammonds noted the location of the sign on US Highway 67 could improve the look coming into Midlothian, and Place 6 Hud Hartson said he believed Hunt’s motivation to help the city’s local businesses was commendable.

While most council members were understanding of the need for local businesses to thrive, both Reno and Sibley appeared to be adamant about the request to amend the signage use in the city as a bad idea. The Mayor’s concern is it could set a precedent and open the door for more signs, potentially leading to ‘sign pollution’ as councilman Wickliffe had mentioned earlier.

City attorney Gorfida pointed out the current ordinance prevents billboards. So, if Council were to approve this sign, and then the city were to receive another application for a billboard, what would the analysis be to make a determination on whether to allow it or deny it?

Hunt said after the meeting city staff had indicated the item could be brought back to council in the future.

Hunt has electronic signs at his other Access Storage locations in Red Oak and in Lancaster on I-35, which highlight local businesses and often recognize locals in the community for their achievements.