Candidates for Duncanville City Council and School Board unveiled their plans April 18 at a forum presented by Duncanville Chamber of Commerce and Rotary Club. The forum was presented in the auditorium at Acton Elementary School, DISD’s newest campus, with Buddy Sheppard serving as emcee. Early voting runs April 22 through April 30 for all residents at the Duncanville Public Library. Election Day will be May 4, with residents voting at their own precinct location.

Patrick LeBlanc, (incumbent), said “I have been a servant and voice for all the citizens. I am the best candidate because of my experience serving others, integrity and commitment to strong personal values and principles that I genuinely live by on a daily basis.”

LeBlanc believes community safety is the number one issue facing the city.

LeBlanc has served as Associate Pastor of the First Baptist Church in Duncanville and as Duncanville High School’s football program chaplain. His book, “On Earth as it is in Heaven,” was published in 2010. He chaired Duncanville Multi-Cultural Commission, and belongs to Duncanville Rotary Club. He and his wife, Wanda, are the parents of six grown children, and have lived in Duncanville since 2008.

Patrick Harvey, who served as Duncanville City Council member at large from 2013-2017, is running for election again. A resident of Duncanville since 1989, he is married with two adult children. Harvey has a background in finance, serving as Finance Director for the cities of Seagoville, Glenn Heights and DeSoto. Harvey is a Sunday school teacher, a member of the Duncanville Audit Committee, and a former member of the Park Board.

Harvey said, “Misunderstanding, mistrust, and misplaced trust” are the primary issues facing the City of Duncanville. He is running “to provide oversight on the approved $20M bond election spending, insuring that proposed projects come in on time and under budget.”

“I have spent over 30 years as a key advisor to municipalities in both Texas and Louisiana, assisting them in the efficient delivery of effective community services….I have accomplished this through consensus building, communication and sharing my financial expertise,” Harvey said.

Joe Veracruz is a 25-year military veteran with the Texas Air National Guard, who deployed to Iraq, Afghanistan and Desert Shield/Desert Storm. He has served 26 years with Dallas Fire Rescue Department, and is now a Lieutenant. Veracruz served as Duncanville School Board Trustee Secretary in Place 3, and is also a member of Keep Duncanville Beautiful. A Duncanville resident for 21 years, he is married to Janet Veracruz.

“I am running for City Council member District 1 to just serve. I want to ensure our leaders and departments have the necessary support and funds to be proactive,” Veracruz said.

“My experience on the Duncanville School Board has taught me to listen and then go into motion. I pledge to do my research on the issues, reach out to citizens to determine their concerns, and vote accordingly. My very diverse background has taught me many professional and life lessons,” he added.

Jones, a Duncanville resident since 2010, has served as a trustee for PWA Coalition dba ASD, largest provider in the DFW area of housing for low income and/or homeless residents affected by HIV/AIDS, five years.

The biggest issue he sees for the city is high water and sewage rates causing difficulty for elderly residents. He hopes to get approval for local homestead exemptions to lower property tax., and also supports repairing and replacing the sewage system.

Jones says “I am willing to devote more time and resources into assuring that my district will actually be heard and represented at city hall. I am the only candidate for District 1 with a professional background in finance.”

Anderson, President of Option Real Estate (Duncanville based multi-service company specializing in creating sustainable neighborhoods in southern Dallas and northern Ellis counties), is running for City Council member District 3. Since District 3 incumbent Leslie Thomas is not running for re-election, Anderson is unopposed. However, he still took the podium for brief remarks about his vision for the city.

Anderson has partnered with the city to advance economic and real estate development for over ten years, resulting in projects like Main Street Station. His work on the Main Street Revitalization Project resulted in the city receiving a prestigious North Texas Council of Government CLIDE award. Anderson also co-founded DuncanSWITCH monthly market. He is a past chair of the Cedar Hill, DeSoto, and Oak Cliff Chambers of Commerce and Best Southwest Partnership.

“I think the top issue for Duncanville is keeping the infrastructure, homes and commercial buildings in good repair, and at the same time making sure all investments provide a return to the taxpayers without increases in the tax, “Anderson said. “I am running for office because I have a huge amount of experience and success in taking neighborhoods and properties that need help and making them relevant and financially sustainable.”

Johnette Jameson, incumbent for District 5 City Council member, did not attend the forum and did not provide answers or bio to the organizers.

Miner retired several years ago as Professor of UT Southwestern Medical School’s Department of Neurosurgery. Prior to moving to Texas, he served as Chairman of the Neurosurgery Department at Ohio State University. Following his wife’s death, Miner raised his two young children as a single parent.

Miner volunteered at Fairmeadows Elementary School helping kids with reading and math. He installed a “Little Public Library” in front of the school to offer more access for kids to obtain books. He has served in Citizens on Patrol, Neighborhood Vitality commission, and is now President of the Rotary Club. He is vice president of Partners in Property Corporation, helping homeowners with issues maintaining their homes. He works with DISD librarians to bring children’s book authors to all nine elementary schools.

Miner said, “There are several issues facing our city, most require allocating our resources wisely and making difficult decisions. We need to extend our resources by investigating and securing outside grants from the federal and state governments, charitable institutions and the business community.”

“I am running for City Council because it is a civic duty for each member of our city to serve our community. We require positive approaches to improving the future of our city and people who listen, build consensus, develop engagement, and who expect compromise but demand results,” he added.

Culton spent 31 years in engineering and management with the City of Dallas, retiring as Program Manager in the Water Department. She is employed by the City of Duncanville as Assistant Director of Public Works responsible for Water, Wastewater, Streets, Transportation, Fleet Services and Engineering.

Culton has one adult son and two young grandchildren, and says she “has a keen interest in ensuring current and future generations of children each receive excellent educations so they can live enriching and productive lives.” Volunteer activities include serving in P.T.A. and church offices and ministering to the homeless.

“I am running for the Duncanville School Board because I want to help the children and youth in my community receive the best education possible. The school district is rated an average of C by the TEA. This is unacceptable for Duncanville ISD,” Culton said.

“I am well equipped and qualified for the task, having over 34+ years of public service experience as a civil engineer and program manager. I have extensive experience in budget and program development, monitoring and oversight,” she added.

DISD School Board Candidate Place 1 Tom Kennedy is the incumbent. He served on the board from 1991-1997, and again from 2003 to the present. Kennedy worked in the medical manufacturing business until 1985, when he joined his wife Sherry in her business, Proforma A-Z Specialties. Kennedy and his wife have three children. He is an active member of the Duncanville Rotary Club.

Kennedy says “Duncanville ISD, like all other districts suffers from lack of proper financial support from the state. They currently provide only about 35% of the revenue needed by the district.”

Other problems, Kennedy said, are overcrowding at the high school, and improving the state rating up from the C received last year. “This is not a simple fix, but I am committed to making our rating as good as it can be. I want to continue on the board to improve educational outcomes of our students. I have 21 years of board service and am a Master Trustee (a distinction awarded by Texas Association of School Boards). I have an understanding of Texas education and a network of other trustees around the state to use when needed. I also have a network of people in the district to draw on for support of new and needed school initiatives.”

DISD board candidate Place 2 Phil McNeely did not participate in the forum and did not submit a bio or other information.

Alexander Bomgardner is a 19-year-old North Lake College student. He served as State President of Student Government for over 700,000 community college students. He interned for State Representative Yvonne Davis and represented the 23rd Senate District Democrats on the state Democratic Convention nominations committee. He is endorsed by Stonewall Democrats of Dallas and RunForSomething.

Bomgardner said, “The biggest challenge facing our schools is a culture of bullying….our current system leaves parents unable to get the help they need for their children, and for many their only option is to take their child out of our district. I will offer myself as a second level of escalation for parents who feel they did not get a fair shake from school counselors and administrators.”

“I am running for three big reasons: to ensure that the kids following me get the same high quality education I got, improve the broken components of our district, and change up the business-as-usual mindset of our current board, “Bomgardener said.

Janet Veracruz has been an educator for Trinity Christian School the past 11 years, and named Teacher of the Year three times. She is pursuing a Master’s Degree in Education and hopes to become an Instructional Coach. She has been a STEM mentor for Perot Museum for three years, and started Invention Convention which resulted in seven award winners.
Veracruz started Homework Club, an after-school program. She also initiated a community garden on campus. She has been married 28 years to former school board member Joe Veracruz. They have two grown children and one grandchild.

“One of the most difficult issues to solve is Parent/Guardian involvement,” Veracruz said. “I have experienced great gains when parents get involved and seen failure due to lack of engaged parents. It is vital that the students’ parents/guardians get ‘plugged in’ at all levels.”

“My diverse background and experience as an 11-year-classroom teacher, my current status as a Perot museum mentor, my experience in STEAM sciences, and my passion for education will be a great asset to the board,” Veracruz said.

Dorothy Wolverton is a public relations administrator and owner of Wolverton Air Conditioning and Heating Co. A graduate of Leadership Southwest, past Chairman of the Duncanville Chamber of Commerce, Wolverton also served as Mother Nature for the City of Duncanville for over 16 years. She is past president of Duncanville Noon Lions Club. She has served on the District Advisory Council PTA Board, DISD Education Board, and District Advisory Council to the DISD superintendent.

Wolverton previously spent 14 years on the DISD board, and wants to return to serve as a link between local school management and the public. She believes that recruiting and retaining the highest quality teacher is very important, plus the need for sound facilities and a safe environment.

“A school trustee’s responsibility is to the students of Duncanville ISD and the taxpayer. My goal is fiscal responsibility while enhancing educational excellence and continuing to deal with the budget challenges,” Wolverton said. “My 14 years of experience on the school board makes me the most qualified candidate.” 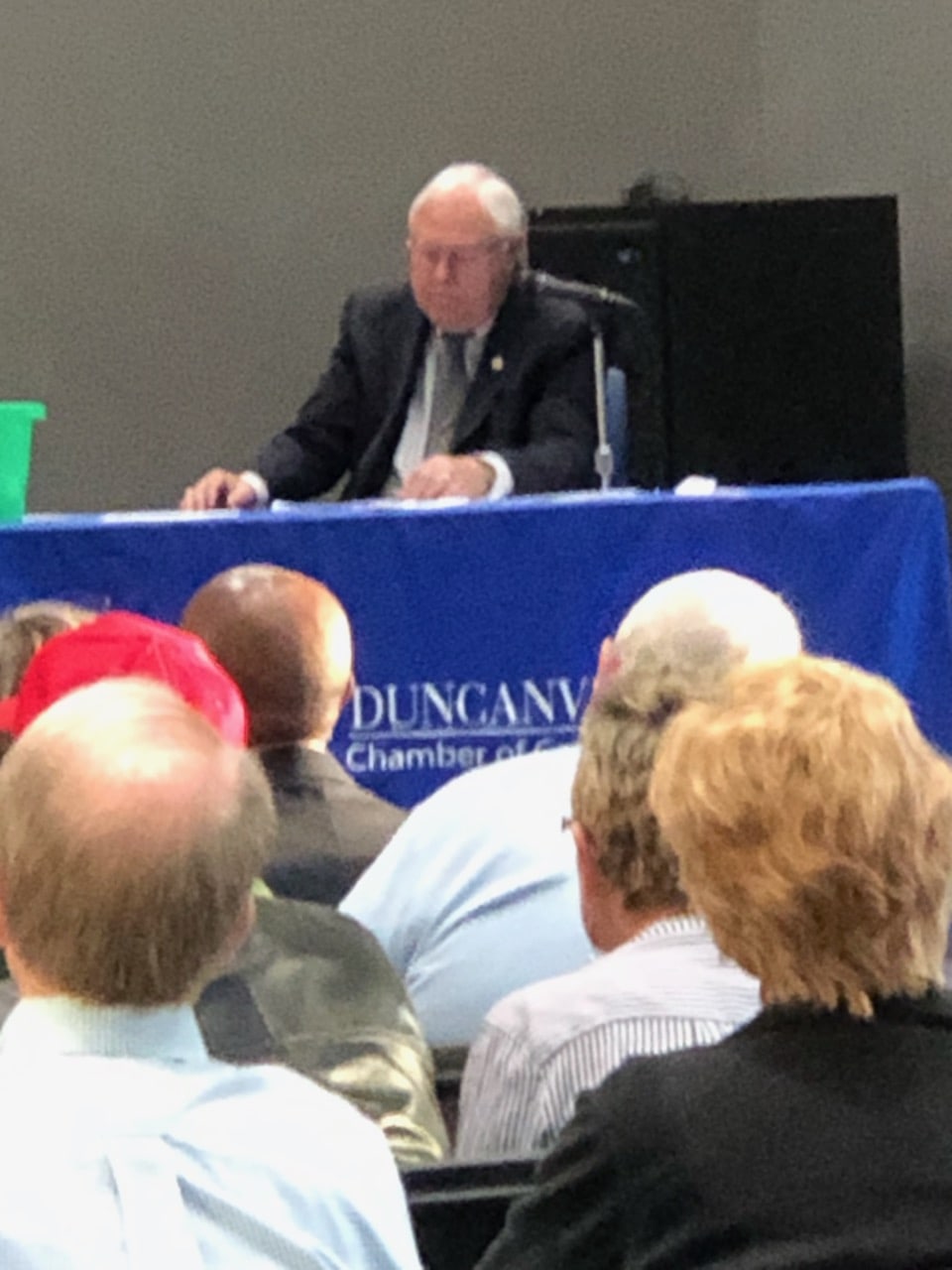