DeSoto- School might not have officially returned at DeSoto ISD, but the District is front and center in the news. Financial mismanagement by the District under the previous Administration is under investigation by TEA, a fire recently destroyed the district’s PPE supply, the Board voted to accept Superintendent Weaver’s resignation, and appointed an acting Superintendent who is now under fire for social media posts.

On Sunday, August 30, at a special called Board meeting to discuss the recent fire, the Board voted 4-3 to accept the resignation of Superintendent D’Andre Weaver. And on Tuesday, Dr. Weaver released a farewell statement on DeSoto ISD’s Facebook page. However, today Dr. Weaver announced he sent a letter to the DeSoto ISD Board notifying them he does not intend to resign. He goes on to say he was railroaded by the Board and their attorney. There’s a question about the legality of the meeting, as Trustee Clark mentions in her statement as posted on Facebook.

Tiffany Clark, “As a member of the DeSoto ISD Board of Trustees, I disagree with the Board’s decision to buy out Dr. Weaver’s contract. First, the Board should not have made such an important decision during an unprecedented “emergency” meeting on a Sunday afternoon, side stepping the requirement to post agendas 72-hours in advance, depriving the public of its right to comment and catching many of us (including me) off guard completely. Ultimately, I participated in the meeting and voted against the “Voluntary Resignation Agreement” because every single taxpayer dollar needs to go toward our students and schools, not toward negotiated settlement agreements. It is irresponsible and selfish to allow adult issues to usurp our focus on students, teachers and staff – especially in the middle of a life or death global health pandemic, one week before school starts. Our community is sick and tired of the constant negative attention, and the Board’s inability to simply stay out of the way. We all must search deep within our souls and ask: why do we serve? If our answer does not begin and end with STUDENT ACHIEVEMENT, then perhaps Dr. Weaver isn’t the one who should’ve resigned. DeSoto deserves better. Our parents have said so. TEA has said so. And soon, the public will have its say.”

Currently protesters are outside the DeSoto ISD Administration building demanding the Board remove Acting Superintendent Hooper following the discovery of his controversial Facebook posts.

Yesterday, DeSoto ISD Board President Karen Daniel and Acting Superintendent Dr. Hooper received notice from the TEA they intend to install AJ Crabill as a Conservator to identify issues and develop a corrective plan.

DeSoto ISD Board has called a special meeting for Sunday, September 6 to discuss the issue of Interim Superintendent. In the meantime, DeSoto ISD has not released a statement regarding the letter from Dr. Weaver. 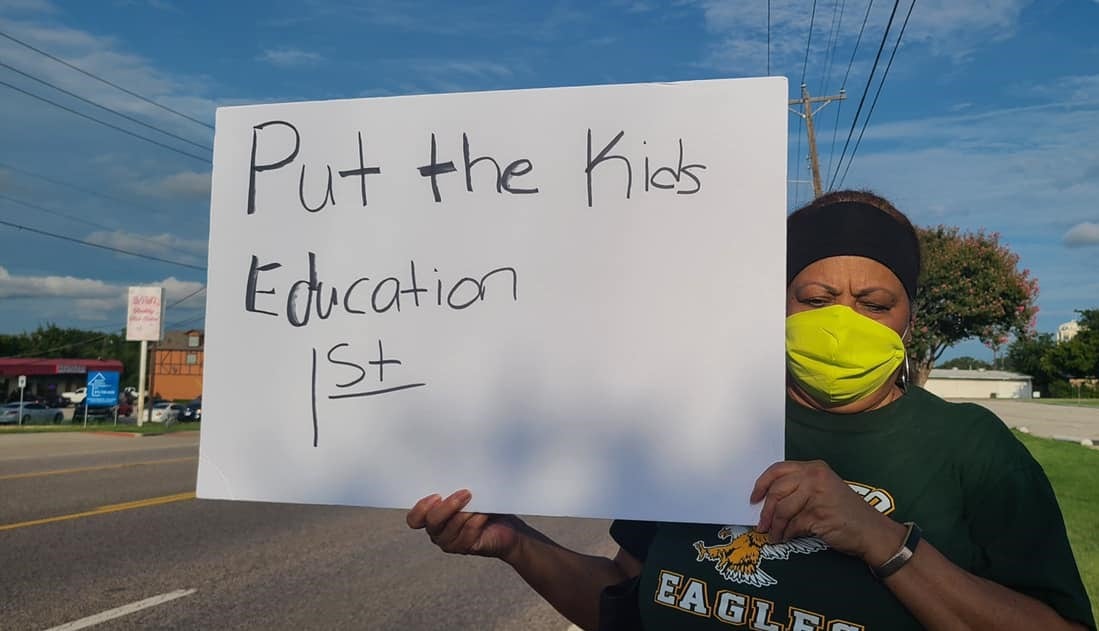