ARLINGTON—The last ten seconds of Saturday’s 6A Division 2 State Championships against Cibolo Steele (14-2) was a nail biter for DeSoto fans.

The score sat at 38-29 and Steele was 4th and goal. Cibolo Steele Quarterback Xavier Martin was on his third pass attempt. If he connected with Running Back Brendon Bailey the Knights would get another chance to snag a state title in overtime. The crowd in excess of 40,000 at AT&T Stadium was silent.

A glider soared just above the heads of DeSoto’s defensive line. The pass and Steele’s state title hopes were knocked down by Defensive MVP Isaiah Stewart. DeSoto gets the gold on their first state championship game appearance.

The defensive effort on this drive made the difference. The efforts of Tyler Jackson, Gemon Green, Isaiah Stewart and Kolby Watts accounted for the stops that cemented DeSoto’s championship.

The Offensive MVP of the Game was DeSoto Quarterback Shawn Robinson. Several times during the game Robinson took matters into his own hands. His quick thinking made the difference.

“We want to get him the ball and get him going early and often. We want to score as quickly as possible,” said DeSoto Head Coach Todd Peterman.

The TCU commit continued to make rushing breaks for big yards. Robinson not only has the speed to make it happen but the strength to make short work of the defenders misguided enough to try and take him head on.

“He is who we thought he was. He is just a tremendous player,” said Cibolo Steele Head Coach Scott Lehnhoff.

Steele Quarterback Xavier Martin echoed his coach’s sentiments. “During the first half he seemed a bit passive. But when he came out in the second half he was on fire. He just outplayed me,” he said.

“It all really started with the O [offensive] line. When they do their job it makes everything else easy.” Robinson said. “I’m going to put my body on the line every time.”

DeSoto Dominated The First Half

Unlike their last three playoff appearances the Eagles offense came out of the gate on fire. DeSoto wholly dominated Cibolo Steele during the first three quarters of Saturday’s 6A Division State Championships.

At the top of the second quarter, Steele made an impressive 8 play/84 yard drive into the DeSoto red zone. Unfortunately, the Knights were consistently unable to make the connections that they needed to get their first touchdown of the game. At the final third down they settled for a field goal to get on the board.

It wasn’t until two minutes before halftime that Martin was able to evade the DeSoto defense and score their first touchdown of the game.

On the DeSoto side, most notable was Wide Receiver Kadarrion “K.D.” Nixon special teams participation. Robinson’s go to receiver was situated deep in the backfield on kickoff returns.

Peterman’s personnel change paid off. Nixon repeatedly returned the ball to favorable field positions for the Eagles offense. He averaged 19.5 yards per carry.

During the second quarter he made his longest return of the game. On a 28 yard scramble, Nixon was able to put the Eagles just outside of the Knights red zone.

The Eagles contributed two scores each quarter to carry them into the half 28-10.

During the second half Cibolo Steele mounted a strong comeback, but their inability to score in the first quarter returned to haunt them.

“It hurts. The community has been a great support to us and every person on this team has given their all,” said Lehnhoff.

After several near misses in the first half, Steele came out with a little more grit in the second half. During the third quarter, Steele put 13 points on the board. Martin launched a pass from the 45 yard to Wide Receiver CJ Williams in the endzone for the touchdown.

DeSoto quickly answered on the next drive. After a penalty and loss of yardage Robinson broke to the 49 yard line. By this time the Steele defense assumed that Robinson would run the option again.

No dice. Robinson fell back and tossed a screen pass to Laviska Shenault Jr. Shenault’s quick foot work allowed him to stay within bounds, evading three backs and gaining DeSoto’s first score of the second half.

Saturday’s win was poetic for some DeSoto fans. The Eagles last faced Steele last September, when they fell 35-32, in a non-district regular season game.

However Coach Peterman says there is no love lost between the two teams.

“We have the utmost respect for Cibolo Steele,” said Peterman. “I consider our staff friends. We knew that this was going to come down to final minutes of the game.”

At the last buzzer of the season DeSoto remained unbeaten 38-29. A joint celebratory parade hosted by DeSoto ISD and the City of DeSoto is tentatively set for January 7, 2017. More details to follow as they become available. 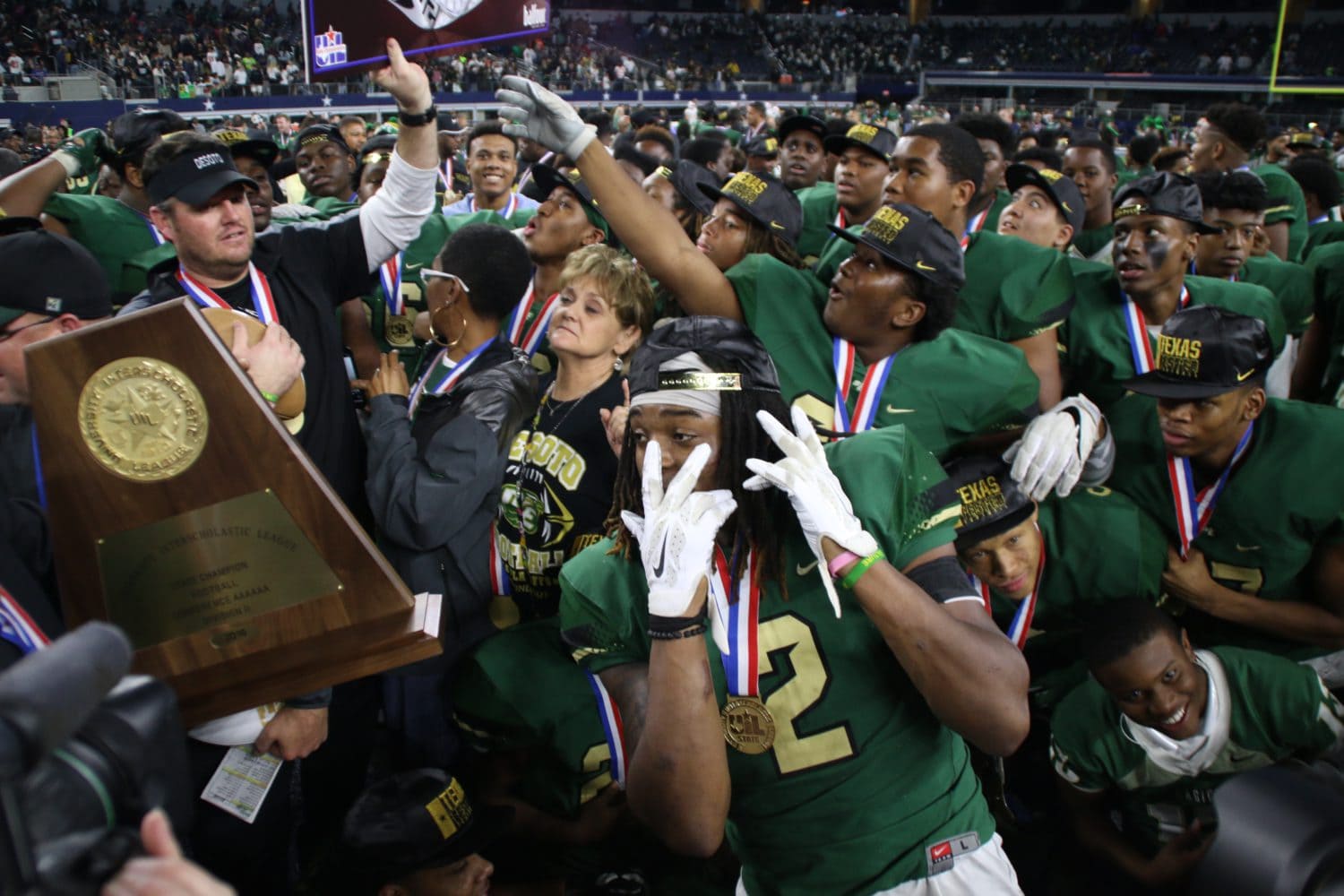