Last Saturday night’s official opening of All the Way, written by Pulitzer-Prize winner Robert Schenkkan, drew a large crowd (including the playwright) to the Wyly Theatre. Directed by Dallas Theater Center’s artistic director Kevin Moriarty, the co-production with Houston’s Alley Theatre had already received outstanding reviews in that city.

The Houston Chronicle proclaimed All the Way a “fascinating portrait” of the Texas politician. Thrust into the Presidency when John F. Kennedy was assassinated in Dallas, LBJ proved to be a most capable Chief Executive. He was able to pull together representatives from both sides of the aisle to accomplish his goal of bringing equal rights to the country.

Using a combination of Southern charm, old-fashioned horse-trading, outright bullying, and even hints of blackmail, LBJ formed a coalition. Composed of Democrats, Republicans, Union leaders, and Black leaders like Rev. Martin Luther King and Stokely Carmichael, he pushed the Civil Rights Act through legislation in 1964. He even managed to keep scheming FBI Director J. Edgar Hoover on a tight leash.

In the role of Lyndon Baines Johnson, Brierley Resident Acting Company member Brandon Potter does a masterful job of showing the complexity of the civil rights hero. While LBJ could be scheming and manipulative, Potter shows his humanity as he recalls growing up in poverty in rural Texas. His sincere belief that all people in this country should have equal rights helps fuel his ambition.

It’s important to pay close attention to this heavy-on-dialogue production, which runs almost three hours. It can be a tad confusing since, with the exception of Potter, everyone in the cast plays multiple roles. And there are a lot of different roles!

The impressive set design by Beowulf Boritt helps keep the timeline straight, if not the characters, as important dates are projected onto the massive white columns that serve as the backdrop. Lighting designer Clifton Taylor, projection designer Caite Hevner Kemp, and costume designer Jennifer Caprio also deserve praise for their contributions to the overall look of the production.

Looking back at these historic achievements, it’s interesting to note that women’s rights were apparently not up for discussion. This is mirrored by the absence of female roles in All the Way. Besides Lady Bird, perfectly played by Leah Spillman, the only females in this large ensemble cast were Sasha Davis as Coretta Scott King and Brooke Wilson as Lurleen Wallace and Muriel Humphrey.

All the Way has extended its Dallas run through April 3, and tickets are on sale atwww.DallasTheaterCenter.org or by calling 214-880-0202. There are numerous educational opportunities for history buffs who would like to know more about LBJ or his achievements.

In addition, DTC has partnered with The Sixth Floor Museum at Dealey Plaza for a community conversation, “JFK-LBJ: Transition of Power” March 21 from 6-7:30 p.m. at the museum. Also, students who participate in Project Discovery are invited to experience The Sixth Floor Museum before seeing the show. It’s estimated that half of the students participating in Project Discovery will see professional theater productions for the first time during the program.

For more information about any of these programs, visit www.DallasTheaterCenter.org. 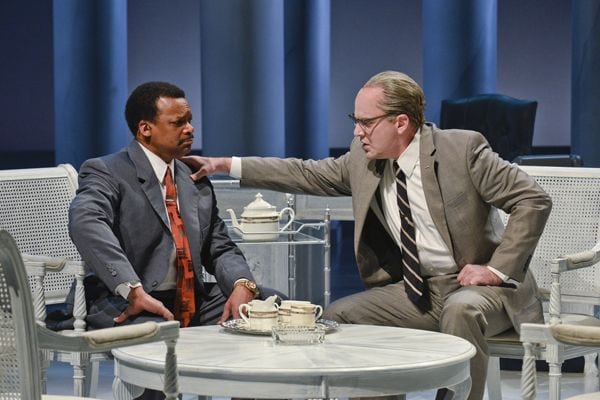