Home Commentary Commentary: This is a Time for Unity, Not Politics 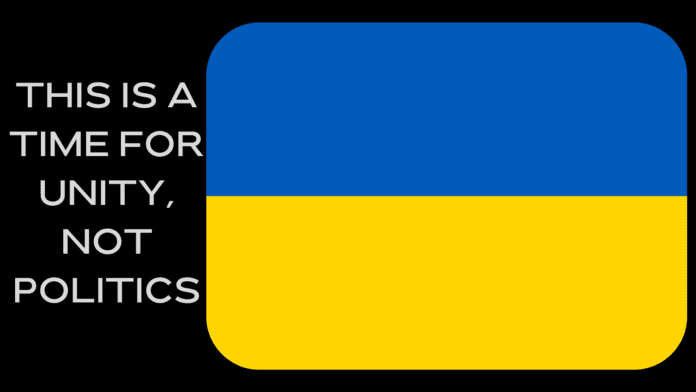 Some of you will remember, like me, drills of ducking under our desk in elementary
school as practice in the case of a nuclear attack. Even though a child, back then my young
mind raced to the thought, “Seriously? A bomb that could melt our skin and bones is going to be warded off by a piece of tinderwood?”

None of us ever took those drills seriously. We were kids and it was an opportunity to get
out of schoolwork and crawl on the floor. Two of any kids’ favorite things – unless you’re
Sheldon Cooper.

Now, as we look at the activities on the other side of the world, there are many in the
Ukraine looking for anything to hide under. From young children to elderly adults, the nightmare we practiced for, an attack by Russian forces, is their reality.

Is it the beginning of World War III? That remains to be seen, but yes, that possibility
exists. They have nukes. We have nukes. Other countries have nukes. And while we are
certainly the top dog in such a battle, a lot of folks could die before this dogfight comes to an end.

And through it all, at a time when we should be focused on praying for our fellow
humans – and no matter where a person comes from, they are just, a fellow human – on
numerous occasions I have read and heard political references connected to this tragic
scenario. Some have blamed former President Donald Trump and his association with Russian President Vladimir Putin. Others have said current President Joe Biden is to blame, calling him weak.

This is not a time for politics. This is a time for humanity, a time to join together against
evil – and Putin is evil. He’s a dictator, plain and simple. Does it matter what political party
someone belongs to as long as we can push his forces back and rescue some folks who never did anything to Russia except ask to be free years ago?

Let’s face it, too much in society today is immediately connected to politics. I drove by a
sign the other day featuring a candidate for sheriff and indicating his political party. Why is that important? Is he not going to provide me the same protection if I’m not in his political party?

Sometimes we’re not Democrats or Republicans, or even Libertarians or members of the
Dye My Hair Pink and Worship Yoko Ono (Google her kids) Party. Sometimes – and this is one of those times – we are simply citizens of the same world, a world we should all want the best for everyone in.

But what about the bad guys? Well, we want the best for them also, starting with not
being bad guys any more.

As for the particulars in how to defeat Putin and Russia, which has returned to what the
late former President Ronald Reagan referred to as the Evil Empire, I don’t have those answers.

That’s for the folks well above my pay grade to figure out.

But instead of pointing the proverbial political finger, for the sake of a peaceful nation
and our friends, please figure it out. It would be great if this situation could be resolved without bombs and weapons. I’m not optimistic in that regard, but if we must go to war, this is a much better reason than for, say, oil.

And while thoughts and prayers are always a good thing to send, perhaps save one or
two to ask that no leader pushes the “red button” to launch a nuke or two. I’m still pretty sure those desks won’t provide much protection.