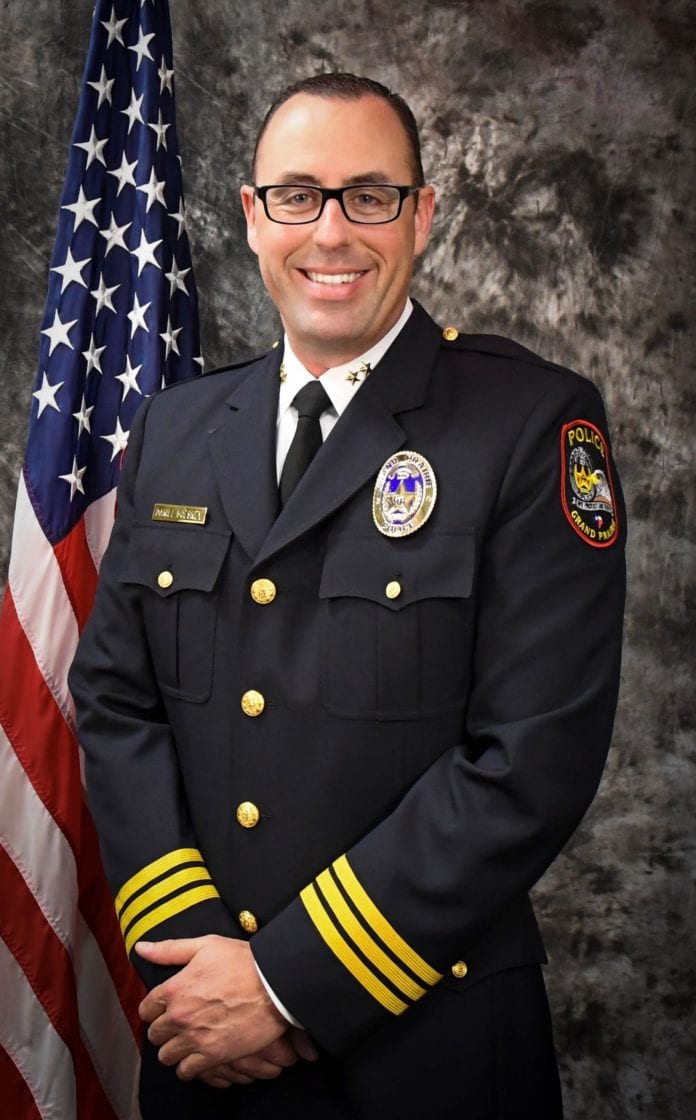 “We were blessed to have exemplary internal candidates,” said Hart. “After a thorough process that involved interviews with City Council, department directors, community leaders and members of the police department, we were able to select between win-win options.”

“Our police department will continue its positive momentum and retain its healthy culture and community policing philosophy in the extremely capable hands of Chief Scesney, the Assistant Chiefs and entire leadership team in the department and city,” said Deputy City Manager, and retired Police Chief, Steve Dye.

“I am both honored and humbled to be selected as the next chief of police for the city of Grand Prairie,” said Scesney. “We will continue our community policing focus and partner with stakeholders to maintain the safe environment Grand Prairie residents deserve and enjoy. We have a team of law enforcement professionals who are second to none, and their passion and drive is evident in the work they do every single day.”

Scesney came to Texas in 1998 after serving his country in the United States Marine Corps as a Military Police Officer. He holds a Bachelor of Arts in Criminal Justice Administration from Columbia College and is scheduled to graduate in May 2020 with a Master of Science in Criminal Justice and Criminology from Texas Christian University (TCU). His career with the Grand Prairie Police Department began in 2001 during which time he has served in a variety of capacities including Patrol Officer, Directed Patrol Unit, SWAT Team Leader, Narcotics, Property Crimes, Domestic Crimes, Major Crimes (including adult and child homicide investigations), Patrol Supervisor, and has commanded both the Special Operations and Investigative Services Bureaus as the Assistant Chief of Police.

Scesney is a graduate of the Police Executive Research Forum (PERF) Senior Management Institute for Police; Texas Christian University’s Leadership, Executive, and Administrative Development (LEAD) Program; Federal Bureau of Investigation-LEEDA Executive Leadership Institute; and the Institute for Law Enforcement Administration-School of Police Supervision. He holds his Master Peace Officer Certification and is a member of the International Association of Chiefs of Police (IACP), Texas Police Chiefs Association and the North Texas Police Chiefs Association. Chief Scesney is also an assessor for the Texas Police Chiefs Association Best Practices Recognition Program, which recognizes Texas law enforcement agencies for compliance with 166 key law enforcement principles and practices. Scesney is committed to safeguarding children and proudly serves on the Board of Directors for Children First Counseling Center as well as the Child Advocacy Center of Texas Statewide Multi-disciplinary Team, both of which aim to make children whole again after abuse. He also teaches Ethics to all Grand Prairie Police recruits prior to their service to the community.

Scesney has a career-long record of excellence including being the Honor Graduate from his Military Police Academy (Class 14-94), twice meritoriously promoted in the United States Marine Corps, Class President of the Basic Course in Applied Police Science (2001), Rookie of the Year (2003), Patrol Officer of the Year (2006), and Detective of the Year on three occasions (2010, 2013, 2015). He was also the recipient of the 2018 City of Grand Prairie Chamber of Commerce Public Service Award, and the Distinguished Leadership Award from Texas Christian University in 2019.

Scesney has two children and in his spare time enjoys coaching his daughter’s softball team, teaching his son to drive, and riding his Harley-Davidson motorcycle.