“Chemical Hearts” is a modern day coming of age/love story. This bittersweet tale of young love stars Lili Reinhart (best known to CW audiences as Betty Cooper, the girl-next-door to Archie Andrews in “Riverdale.” Lili stars as Grace Town, an attractive transfer student who disguises her good looks in over-sized boy’s clothes and who walks with a bad limp.

When the enigmatic transfer student limps into 17-year-old senior Henry Page’s (Austin Abrams) journalism class, shy Henry is immediately intrigued. And after they are assigned to work together as co-editors of the school paper, shy Henry finds himself increasingly drawn to Grace.

His closest friends are puzzled at Henry’s sudden desire to walk home instead of ride the bus with them. But as steadfast Henry slowly falls for the mysterious, brooding newcomer, he finally learns Grace’s heartbreaking secret. It’s a secret that changed her life as a popular, over-achieving student and track star at her former school. Her secret may change Henry’s life as well.

The screenplay is written by Richard Tanne, who also directs the film. It is based on the book, “Our Chemical Hearts,” by Krystal Sutherland. The film will be released on disc and various streaming platforms Aug. 21. The Amazon Studios release is produced by Alex Saks and Richard Tanne, with Lili Reinhart as the Executive Producer.

Sarah Jones, Adhir Kalyan, Kara Young, Coral Peña, and C.J. Hoff are also featured in the drama/romance. While the story line delves into depression and loss as much as high school romance, there are several light touches and comic interludes provided by Henry’s friends and their crushes. The witty dialogue also helps to lighten the tone, which can be very dark. Henry and Grace engage in clever word play, and their back and forth bantering often disguises their real feelings.

Chemical Hearts is rated R for language, sexuality, and teen drug use, and runs 93 minutes. The film will be available on Amazon Prime streaming platforms and on disc Aug. 21. 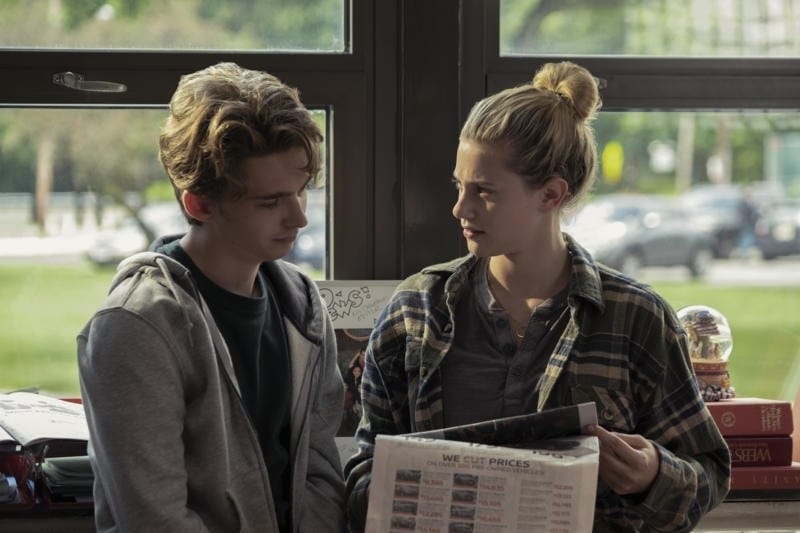