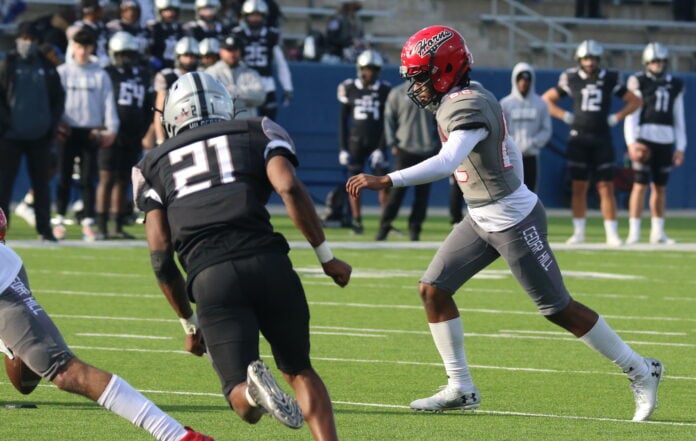 Will The Game Be On The Line, Waiting For The Kicker To Win It?

(CEDAR HILL, TEXAS) Jadon Cardell runs the scenario through his mind on a regular basis.

The Longhorns are tied, or trailing by a point or two, and it’s fourth down at the homefield of the Dallas Cowboys.

There are five seconds or less in the game, and the only thing standing between the Cedar Hill High School Football Team’s fourth state championship is a field goal sailing through the uprights.

“I embrace it,” said Cardell, a senior kicker/punter. “I definitely think about it every game, how this may be the game where I’m put in the situation to win it. The pressure is there, but I try to block out the pressure and focus on making the field goal.”

Cedar Hill (12-1) will face Katy (13-1) in the UIL Class 6A Division II State Championship Game at 1 p.m. Saturday at AT&T Stadium in Arlington.

With an All-American quarterback Kaidon Salter, a University of Tennessee signee, leading a dynamic offense this season, there hasn’t been much of a need for field goals, or even punts.

But as the playoffs progress, the competition becomes more challenging and the games are closer. The frequency of field goal attempts and punts both increase.

“Jadon is a guy who does his job,” Cedar Hill head football coach Carlo Lynn said. “People doing their job makes life easier for everybody.”

Cardell has made five of seven field goal attempts this season, including four of five in the postseason.

His Teammates Believe In Him

His 36-yard field goal in a 45-0 second round playoff victory over Tyler Legacy tied his career-long, which he kicked as a freshman in a 2017 win over South Grand Prairie.

He’s never found himself in that “dream” situation where the game was on the line, but his teammates would beg to differ with regards to last Saturday’s 27-17 State Semifinal victory over Denton Guyer.

In that game, the 5-foot-11, 180-pound senior supplied the Longhorns’ only points of the second half on field goals of 33 and 23 yards, respectively. It was the first time in his career that he made multiple field goals in a game.

“My teammates were really excited, and they were cheering me on,” Cardell said. “I didn’t call it a game winner, but they did.”

Cedar Hill led Guyer 27-17 as the Wildcats set out on their final scoring drive. Cardell’s two successful field goals changed the calculus of that Guyer drive.

Without those points, the Longhorns would have held a 21-17 advantage, and Guyer would have needed just one touchdown, rather than 10 points.

Cardell is a lifelong Longhorn who started Kindergarten at High Pointe Elementary in August 2008. He was a scholar at High Pointe and West Intermediate scholar when Cedar Hill made three consecutive trips to the State Championship Game, between 2012-2014.

“I followed the team and was a huge Longhorn fan,” Cardell said. “I looked up to those guys like they were in the NFL to me. I would go to the games every weekend.”

Having the opportunity to play on the same field (AT&T Stadium) against the same opponent (Katy) as those Longhorn Legends is “surreal”, said Cardell.

“It’s a true once in a lifetime experience knowing I would watch them every Friday night and now that I get to be part of that is just an amazing feeling,” Cardell said.

Cardell played football (he was a defensive back) as an eighth grader at Bessie Coleman, when the coach asked if anyone could be a kicker.

Cardell, having grown up playing soccer, raised his hand and became the kicker for Bessie Coleman.

Playing high school football, however, was still a question mark.

Cardell enrolled at Collegiate High School and wasn’t sure if he wanted to balance college-level classwork with a varsity sport.

“At first, it presented a challenge, but then I got used to it and had to remember to put a lot of effort into both school and football,” Cardell said.

Cardell started the season as the kicker for the Longhorns freshman team in 2017. A handful of games into Lynn’s first season as head coach, he called upon Cardell to become the varsity kicker.

“It was a surprise,” Cardell said. “I wasn’t expecting it. There were a lot of emotions at once. I Didn’t know if I should be nervous, excited or ready to go, but I had to be ready. I stepped up to the plate and did what I had to do.”

Cardell is the only current Longhorn to have been a member of that 2017 varsity team. That squad missed the playoffs, but the foundation was set for a bright future.

While many players have the experience to hone their skills at the freshman or junior varsity levels, or play as a backup (and learn from a starter whose ahead of them on the depth chart), Cardell never had that luxury. His learning curve was much steeper.

“Being a kicker is more of a 1-on-1 thing,” Cardell said. “There’s a lot of self-motivation and emphasis on making sure you’re hitting on every aspect. Coach Lynn is a special coach. He does more than coach, and he builds us up as a team. He prepares us for life and for the future.”

At Cedar Hill football practices, Cardell practices on his own because the Longhorns don’t have a kicking coach. Instead, he works with two private kicking/punting coaches outside of school.

“Those coaches put me through game-winning situations,” Cardell said. “I have to make sure I remain calm, go out there and do my job. Kickers have a lot of extra pressure. It’s a part of the job.”

When it comes to punting, Cardell is averaging approximately 40 yards per punt. While punting may not have the theatrics of a game-winning field goal attempt, it is still every bit as important.

“I’m always focusing on doing my job to put our team in the place to win,” Cardell said.

“I want to provide great starting field position for the defense.”

Cardell, who turns 18 next month, is considering playing college football as a punter. Baylor and Southern Methodist, among other colleges, have expressed interest in Cardell as a punter.

It’s possible that the day when Cardell raised his hand at Bessie Coleman Middle School four years ago could eventually lead to a spot on an NFL roster one day.

But regardless of whether Cardell’s last football game is this Saturday or two decades from now, he has big plans for the future.

This spring, he will earn an Associates of Science from Dallas College Cedar Valley Campus and have enough college credits to enroll in a four-year university as a second semester sophomore.

“Jadon is a proud product of Collegiate High School,” Collegiate Dean Benjamin Hairgrove said. “He is always up for a philosophical debate with his peers and professors. He’s great at thinking outside the box while also being successful at his studies. He is also the brother to one of our alumni, so he has been part of the College family since before becoming a Collegiate scholar.”

“I’m very into technology, computers and all of the technology,” Cardell said. “I’m thinking about working in programming and developing for the aerospace industry.”’