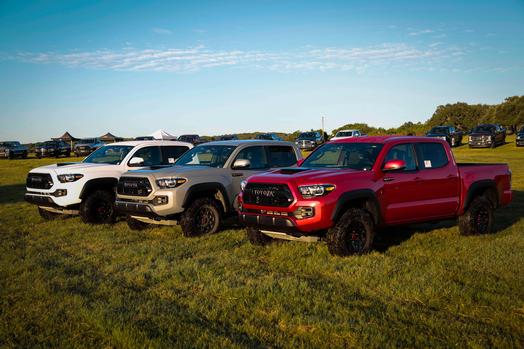 Texas Auto Writers members were the first automotive media to get their hands on the wheel of the all new 2017 Toyota Tacoma TRD Pro this week. On a ranch just outside of Austin, the new Tacoma was a popular truck on the level three off road course.

After two days of demanding on and off-road driving at Longhorn River Ranch in Dripping Springs, Texas, journalists voted for their favorite pickup trucks, SUVs and CUVs in multiple categories. This year, more than 70 media members attended the event to test drive 82 vehicles from the world’s top truck and SUV manufacturers.

“As America’s best-selling mid-size pickup for ten years running, the recognition as Mid-size Pickup Truck of Texas confirms our vision of producing a truck that can tackle any off-road challenge,” said Mike Sweers, Tacoma chief engineer. “Toyota’s commitment to the new Tacoma TRD Pro was focused on meeting the needs of adventure-seekers where roads fear to tread, and we have proven that today.”

With a heritage-inspired TOYOTA grille and TRD Pro badge on its front door with diamond-pattern knurled finish, the 2017 Tacoma TRD Pro’s exterior it stands out in the crowd. From behind, the truck features a black TRD Pro, 4×4 rear tailgate badging and taillights with black bezels and TRD cat-black stainless steel exhaust system. The TRD Pro grade’s look is topped off with a TRD Pro badge on the front door with a diamond-pattern knurled finish.

The 2017 Tacoma TRD Pro produces 278 horsepower and includes a V6 with a segment-first Atkinson Cycle engine. For those traveling off the beaten path, the Tacoma’s TRD Pro grade offers a Crawl Control system, Multi-Terrain Select, Locking Rear Differential, Hill Start Assist Control and Active Traction Control, which takes over the truck’s acceleration and braking, allowing drivers to focus on navigating over tough terrain.

With Tacoma’s Chief Engineer Mike Sweers riding shotgun, I took the mid-size pickup off-roading to experience its toughness firsthand. We tackled moguls, climbed rocks, descended hills and more, all in two-wheel drive. Sweers’ grinned when he told me, “the Tacoma is one of the few trucks here capable of handling this course without using four wheel drive.And guys, in my opinion, the mid-size Truck of Texas was begging for more.

Its tough, its capable and it just earned its first trophy. Congratulations Toyota, the 2017 Toyota Tacoma TRD Pro is a winner!