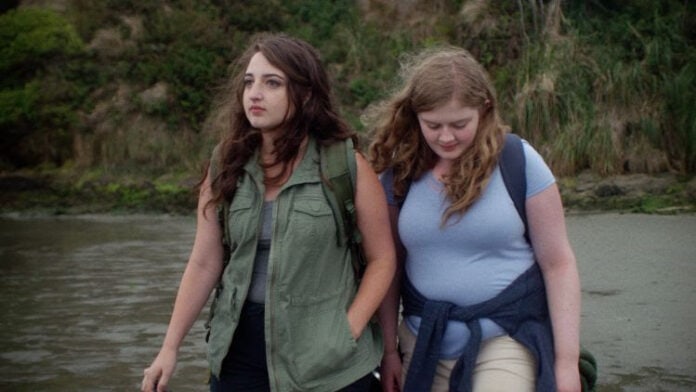 I loved “”What Lies West,” an Indie film starring two very different but likeable young women in a coming of age story. Nicolette (played by Nicolette Ellis) is a popular 22-year-old who’s a recent college graduate. She majored in acting, but isn’t quite ready to head to L.A. with her friends. We learn that Nicolette’s not quite over the pain her boyfriend Alex (Jack Vincenty) inflicted when he married someone else.

Alex still tries to keep Nicolette on his string, but reneges on a promise to hire her at the Sonoma Valley winery he runs for his family. Instead, he offers to find an image consultant to further her acting dreams. This should give her an “edge” over other aspiring actresses heading for Hollywood. Nicolette moves in with her parents, but her plans for a relaxing summer are overturned by her concerned mother.

Her mom finds Nicolette a summer job as a Nanny/baby sitter for Chloe (Chloe Moore), a 16-year-old loner. Chloe’s mom is an over-anxious single parent who won’t let her daughter stay home alone while she’s working. The polar opposite of the outgoing Nicolette, Chloe refuses to accept her offers of friendship.

The tenacious Nicolette keeps trying to break through Chloe’s defensive shell, and finally finds a way to bond with her by joining the teen on her hikes. As these hikes grow longer and longer, Nicolette discovers that Chloe has a larger plan. Her goal for the summer is to hike the back roads of Sonoma County to the Pacific Ocean, about 60 miles, and back. All without her mom finding out.

Since Nicolette is also looking for a challenge to help her “stand out” from the pack, (per the image consultant) she embraces the adventure, planning to document it on social media. When Chloe’s mom, a yoga instructor, leaves for a 4-day business retreat, the two young women start hiking to the coast.

“What Lies West” features naturalistic, believable performances by its two young leads. Their fears and insecurities emerge, along with their dreams, when they start talking candidly with each other. Nicolette is the niece of writer/director Jessica Ellis, and the realistic interactions between mothers and daughters likely stems from their relationship.

Sionne Elise, Beverly Simmons, Jeff Prater, and Anna Peterson are also featured in the cast. The lovingly photographed film features cinematography by Sean Carroll, and is produced by Sean Carroll and Jennifer S. Miliman and edited by Matt Coleshill. “What Lies West” is available on digital platforms and DVD from Passion River Films May 11.