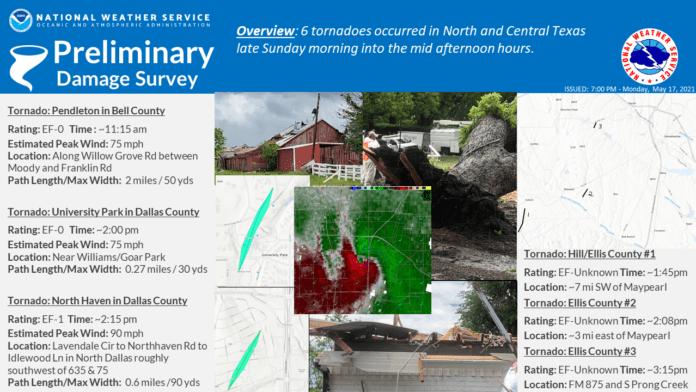 Yesterday’s weather across Dallas Ft. Worth was rocky and wet. Torrential rains fell flooding roadways, and tornadoes kicked up with almost no warning. Fortunately the tornadoes were brief and weak and in Ellis County no damage was reported. According to the National Weather Service Bell and Dallas counties weren’t so lucky and did experience some damage.

NWS said: “A slow moving upper level disturbance combined with a very moist and tropical airmass resulted in a total of 6 tornadoes over North and Central Texas from late morning into the mid afternoon hours. The tornadoes were generally weak and brief, but some damage did occur across Bell and Dallas counties.”

In Bell County, the estimated peak wind was 75 mph and length was 1.944 miles with a width of maximum 50 yards at approximately 11:14 am ending at 11:16 am. There were no injuries or fatalities from this tornado.

Survey Summary from NWS: Several homes sustained minor damage from a brief tornado along Willow Grove Road between Moody Road and Franklin Road. Some
outbuildings and chicken coops were damaged or destroyed. A resident video recorded the tornado for part of its path.

The Hill/Ellis County Tornado EF rating is unknown, this occurred at 1:42 pm at 5 E Grandview, Hill County, TX. Peak wind is unknown and the path length was 2.3371 miles
with a path width 50.0 yards, no fatalities or injuries.

Survey Summary from NWS : A storm spotter tracked and video recorded a tornado from extreme northeastern Hill county into western Ellis county. Some tree leaves
and small branches were lofted into the tornado circulation. The tornado dissipated before crossing FM 916 west of Maypearl. No damage was found or reported with this tornado as it tracked over inaccessible rural land.

At 2:08 pm yesterday in Maypearl there was a tornado with estimated peak wind unknown the path length was 0.8876 miles and path width 50 yards. No fatalities or injuries linked to this tornado.

Survey Summary from NWS: Video shows a brief tornado tracking across rural land near the intersection of Old Maypearl Rd and Greathouse Rd. No damage was reported with this tornado.

At 3:14 pm yesterday there was a tornado that began at 6 NNE Maypearl with a path length of 0.6421 miles and maximum path width of 50.0 yards. Peak wind is unknown, this storm had no fatalities or injuries.

Survey Summary from NWS:Video of tornado east of the Shadow Creek Pumpkin farm. Radar estimated the circulation location near FM 875 and South Prong Creek. No damage was reported or found with this tornado.

This tornado near University Park was rated EF0 with an estimated peak wind of 75 mph, the path length was 0.2713 miles with a maximum path width of 30.0 yards. No fatalities or injuries reported with this tornado.

Survey Summary from NWS: A tornado developed at Williams Park, leading to mainly down tree branches. The tornado then traveled northeast into Goar Park, uprooting a large tree. Surveillance footage from the fire station shows a circulation on the ground as the tornado crossed University Blvd. As the tornado crossed Turtle Creek Blvd, the main damage occurred to tree limbs, with occasional shingle property damage.

This tornado was rated as an EF1 with estimated peak wind of 90 mph. The path length was 0.5994 miles with maximum path width of 90.0 yards. No fatalities or injuries were reported.

Survey Summary from NWS: The same supercell that produced a tornado in University Park produced another tornado just north of Royal Ln and east of Michaels Drive. The fist signs of damage appeared on Lavendale Circle with a few uprooted small trees and down tree branches.

The tornado continued moving to the northeast, strengthening to an EF-1 with 90 mph winds. The primary area of more substantial damage occurred just west and north of the North Haven Gardens.

A single-family home on Northhaven Rd sustained the worst damage, with a partial roof collapse. Northeast of the worst affected residence, occasional roof/shingle damage and downed tree branches were found.