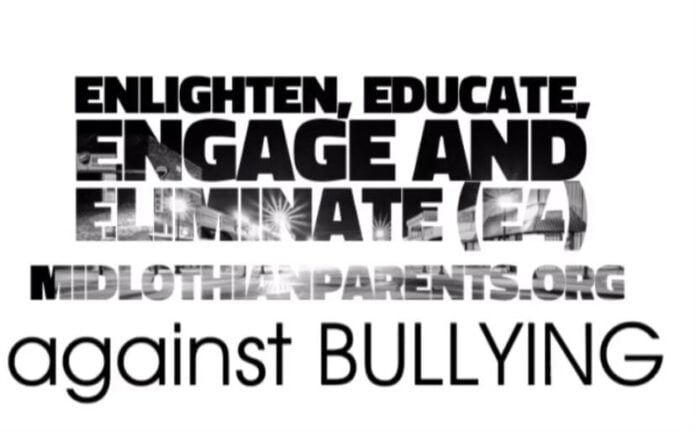 A Campaign Against Bullying In Midlothian Schools

When battling bullies, often the best approach is banding together.

And that’s what Michelle Luna-McGimsey, a parent in Midlothian is asking others to do with her as she is offering a new method for dealing with bullying. She’s the founder of Midlothianparents.org Against Bullying.

“Our mission is 4E,” Luna-McGimsey said, breaking them down into:

*Enlighten – Seize opportunities and shed light on the true effects of cyber and other bullying of children and teens.

*Educate – on the impact of bullying, cyberbullying and the like. Embrace social and emotional learning to better equip children, their parents and the community.

*Engage – Advocate for families, providing resources to enable them to initiate an action plan for their safety and well-being.

*Eliminate – Together, enlightening, educating and engaging will help eliminate bullying and its toxic effects.

She’s proposing the use of STOPit for youngsters, a third party app that can be downloaded on a personal phone, capable of real time messaging, real time reporting and real time awareness.

“Why not leverage the latest technology to help our kids?” she said.

Luna-McGimsey said that while STOPit isn’t free, it is available through the Texas BuyBoard Purchasing Cooperative, which allows for a lower rate of approximately 85 cents per youth.

“I understand the 1,000-plus schools in Texas that do utilize the app use Federal Funding provided for security,” she said.

She said the app is easy, fast and anonymous. It will submit photo or video evidence and communicate anonymously with administrators with STOPit Messenger.

She stressed that the app allows youths to stand up for themselves and their peers without risk of reprisal.

“STOPit mobile app provides a safe, anonymous and comfortable way for students to share information with you so that you can provide help – as quickly and efficiently as possible,” she said.

The project is personal

“The journey began three years ago. We had lost my father on New Year’s Day, whom my children where extremely close to. My daughter was just diagnosed with major depression due to his passing. And during one of the hardest times in our lives, we experienced several bullying incidents and found out many of those that had witnessed the incidents did nothing, and the one that did finally report did so hesitantly,” she said.

“That was just with one incident. We tell our kids to be upstanders, but encouraging students to speak up just isn’t enough.”

Luna-McGimsey then spoke with a local official of her experience. He told her if she wanted to help facilitate change, do research, find a solution and present it – which she has done.

The response to Midlothianparents.org has been strong, she said. As for the name, she said it is designed to reflect the community as a whole and reach out to the parents.

“Because it always starts in the home,” she said. “Instead of going to several sites to locate information, it’s a sort of one-stop shop for Midlothian Parents that can list community events, library events and park events and the like.”

Luna-McGimsey said her idea is designed to work hand-in-hand with David’s Law, or Senate Bill 179, which went into effect Sept 1, 2017. The law is named after 16-year-old David Molak, a high school student who died by suicide after being harassed through cyberbullying. It aims to bring awareness and new policies into schools to help deal with and combat cyberbullying.

She’s also hoping her plan can work hand-in-hand with the current system in place by Midlothian ISD.

“Why not leverage the latest technology to help our kids?” she asked. “We have had several meetings discussing the current reporting protocol. They have noted our concerns and will continue to look into it.”

School officials have acknowledged listening to Luna-McGimsey, but aren’t issuing anything official at the moment. Board member Tami Tobey said that while she can’t make an official statement about what the MISD will or will not do concerning the project, she did say that not only does Luna-McGimsey deserve to be heard and her idea addressed, but so should all citizens who come forward.

“”As a board member you would expect good communication with our constituents,” she said.

Tobey also said she recalled Luna-McGimsey dropping off a flyer at a recent board meeting, along with having a discussion with someone from the school’s tech department, though she was not privy to the actual conversation.

Tobey added about bullying, “It’s not just a Midlothian issue. It’s a state and national issue.”

Luna-McGimsey said any parents in Midlothian are welcome to join the movement.

“In our world of technology, the rise of social media has opened the door for bullying/cyberbullying, increasing our kids’ exposure to potentially harmful interactions,” she said. “Pure bullying is such a significant public health problem, contributing to their poor health. That can increase the risk leading to eating disorders, low self-esteem, deliberate self-harm and suicide.

“This isn’t just about being pushed in the playground or being called a name. I’ve come across people that think it’s nothing more than a ‘rite of passage.’ Midlothianparents.org wants to let others know you are not alone. We’re providing resources and education to help eliminate this growing problem with lasting emotional and social harm.”

Ocean Vodka, A Must Add To Your Home Bar