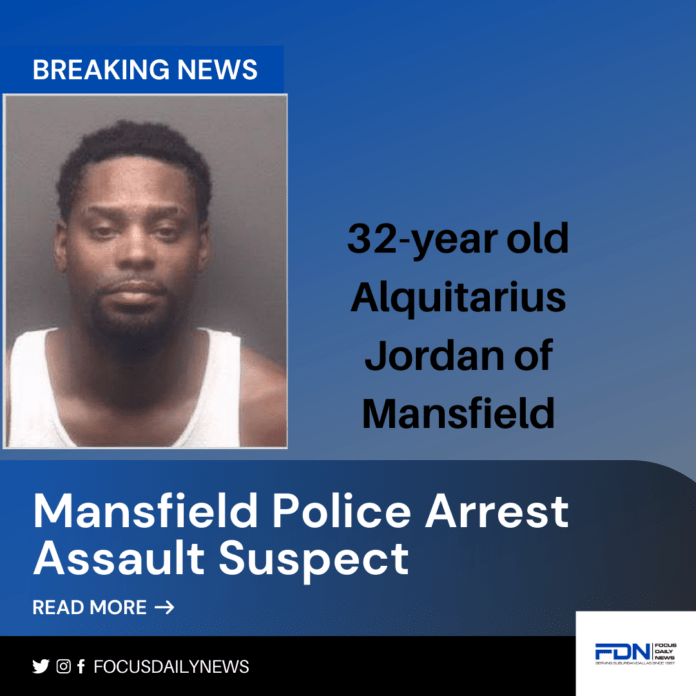 UPDATE – ARREST MADE IN AN ASSAULT INVESTIGATION

On Thursday, October 22, 2020, the Mansfield Police Department along with the U.S. Marshal Fugitive Task Force arrested 32-year old Alquitarius Jordan of Mansfield. He was taken into custody in the 800 block of E Dallas without incident. Jordan was charged with Assault Bodily Injury and Unlawful Restraint. After his arrest, a parole violation out of the State of Texas was added.

Mansfield Detectives quickly identified Jordan with the help of numerous leads through social media and tips generated with the assistance from traditional media outlets. Jordan remains in the Mansfield City Jail on both charges with a total bond set of $20,000.
“I am thankful for vigilant citizens in our community who provided information that led to the identification and arrest of the suspect,” said Mansfield Police Chief Tracy Aaron. “Teamwork bolsters our public safety efforts to make a stronger community.”

On Monday, October 19, 2020 at 5:15 a.m., the Mansfield Police Department responded to an assault call in the 800 block of Kay Lynn Street. When officers arrived, they located a female victim who had been assaulted. The victim reported to officers that she was sitting inside her vehicle in a residential driveway. As she opened her driver’s door to exit her car, she saw an unknown suspect crouching near the rear of her vehicle. The suspect then began to assault her causing minor injuries. The victim began to yell for help and defended herself to the point where the suspect ran off. Detectives are uncertain of the motive in this offense and have not ruled out the possibility that the suspect was attempting to burglarize or steal the vehicle when he was surprised by the victim exiting the car.

The suspect is described as a black man in his 20s approximately 5’10”-6’ tall with twisted dreadlocks (approximately 3-5 inches long). He was last seen wearing a dark colored short-sleeve t-shirt and ran from the location on foot. The department is asking residents in the area to check their consumer video surveillance systems to see if you captured the suspect in the immediate area. Photographs from a nearby area believed to have captured the suspect’s image are attached to this release.

Detectives also believe that the suspect is involved in several vehicle burglaries in the area. Anyone with information is asked to contact Mansfield Detective Peacock at 817.276.4741. Tipsters can also remain anonymous by contacting Tarrant County Crime Stoppers at 817.469.TIPS.
Report #20101902