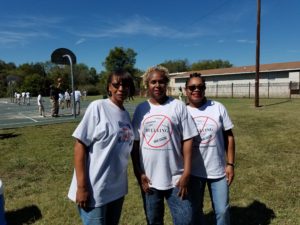 Terry Tucker, Lancaster ISD counselor who coordinated the rally, said, “I believe that education on bullying is the key to a lasting and self-sustaining effect on the mindset of a student. The goal of the ‘Say No to Bullying Rally’ is to teach the different forms of bullying and to expose students to the effects of bullying and how to identify them. Think about it like this, the level of exposure is the only difference between something being buried above ground or below ground, and the educational benefits to bullying help resolve conflicts. This level of awareness will support our students for a lifetime.”

“Bullying among children has increased to such a critical level that parents, educators, counselors, state legislators and many others, including the president of the United States, have sounded the alarm that enough is enough,” Tucker said. “Bullying affects millions of students every day. That is why we decided to engage the students and parents with our rally at 1 p.m. Oct. 11. We presented some facts, effective tools and resources about bullying so students could learn the different types of bullying, how bullying effects victims, how technology has made bullying worse and how as classmates they can help those being bullied.”

“Our goal is to make the school atmosphere a better place for learning, and if we can give tools to students that will get them to stop and think before they make that social media post or before they do something to somebody the school campus climate is all the better,” Tucker added.