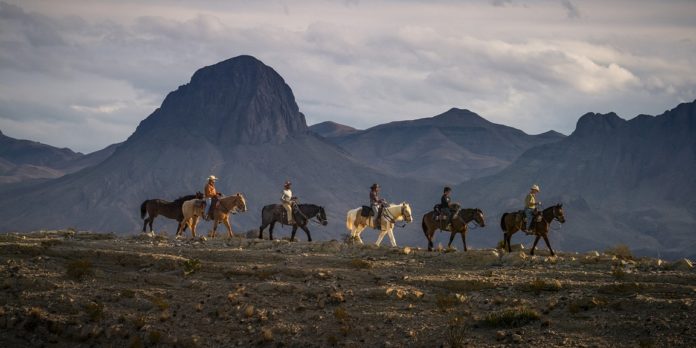 EarthxFilm presented by EarthX will bring an educational, entertaining slate of films and VR presentations with their environmentally focused film festival. Their third film festival will be held at Fair Park and theaters throughout Dallas, April 19-28. Following a week of special screenings and events from April 19-24, Ben Masters’ THE RIVER AND THE WALL will be the Special Spotlight Screening selection. It will screen at a Gala Presentation at the Perot Museum April 25.

There are 16 feature films, 40 shorts, 40+ immersive entertainment experiences and exhibits that shine a light on important conservation efforts. They focus on adaptation due to climate change, and investigation into the impact on our lives from pollution, lack of conservation, and global warming. EarthxFilm offers an important platform to filmmakers and the truth they have uncovered.

EarthxFilm’s co-Founder/President, Michael Cain, said, “This year, we will continue to increase our footprint across Dallas, screening films, presenting virtual reality, interactive projects and environmentally-focused panels at a number of theaters and venues all over the city – beyond our wonderful hub at Fair Park during EarthX, April 26-28. These films and the filmmakers behind them deserve the largest audiences we can provide as the impact and immediacy of their subjects touch every one of us.”

EarthxFilm will continue to take a more active role in helping effect change. In addition to introducing these films to North Texas audiences, they hand out cash prizes to the film festival’s award-winning filmmakers. This assists them in continuing their important work and future projects. Cash jury and audience prizes will total $25,000 this year.

EarthxFilm Artistic Director David Holbrooke, said, “This year’s EarthxFilm slate clearly shows the urgency of the many crucial battles going on all over the world on the environmental landscape. However, these documentaries aren’t simply earnest attempts to advocate for a just cause but are serious, well-crafted stories that bear witness to what is happening out there on the front lines. Audiences will be motivated and inspired by the real life heroes in these movies and will come out of the theaters ready to make their own impact.”

Ben Masters’ “The River & The Wall”

THE RIVER AND THE WALL follows five friends on an immersive adventure through the unknown wilds of the Texas borderlands as they travel 1200 miles from El Paso to the Gulf of Mexico on horses, mountain bikes, and canoes. Inspired by the threat of new border wall construction looms ahead, and what he saw as the urgency of documenting the last remaining wilderness in Texas, Masters recruited NatGeo Explorer Filipe DeAndrade, ornithologist Heather Mackey, river guide Austin Alvarado, and conservationist Jay Kleberg to join him on a two-and-a-half-month journey down 1,200 miles of the U.S.-Mexico border where they come face-to-face with the human side of the immigration debate and enter uncharted emotional waters.

Other films feature the attempt to save animals and species around the world, whose survival also has an impact far beyond that single life or the one species’ lives. Those films include David Hambridge’s KIFARU, about the effort of a small group of rangers in Kenya’s Ol Pejeta Conservancy, devoted to caring for and protecting Sudan, the last male white rhino, along with Sudan’s daughter and granddaughter. Richard Ladkani’s SEA OF SHADOWS focuses on the fight to save the earth’s smallest whale, the vaquita, which is at the point of extinction due to the mass fishing of the totoaba (described as the “cocaine of the sea” due to the black market price for the fish’s bladder) in Mexico’s Sea of Cortez.

Rob Stewart’s SHARKWATER EXTINCTION follows the late filmmaker and activist’s continued efforts to expose the shark fin and fishing industry that continue to drive the extinction of the species. Ross Kauffman’s TIGERLAND weaves together two stories of tiger conservation – one a half century ago in India, and the second, which is taking place today in Russia’s Far East, where guardians of the last Siberian tigers risk everything to save the species.

Additional highlights include John Chester’s THE BIGGEST LITTLE FARM, about a couple that took a vision to start a farm that produced a wide variety of fresh, thoughtfully grown food and turned it into a robust and highly functioning biodynamic operation that grows food without pesticides, poisons or any of the other mainstays of modern farming. Shannon Service and Jeffrey Waldron’s GHOST FLEET shows the human trafficking in the Thailand fishing industry that has resulted from years of illegal and invasive fishing forcing boats further and further from shore.

Slater Jewell-Kemker’s YOUTH UNSTOPPABLE: THE RISE OF THE GLOBAL YOUTH CLIMATE MOVEMENT follows the 15-year-old filmmaker’s chronicling of the rise of young environmental activists fighting for a better future. In this film, she tells her eight year story from the unique perspective of an activist whose coming of age parallels the movement.

Two films at the festival share the lineage of one of the “fathers” of conservation and the sea, Jacques Cousteau. Céline Cousteau’s TRIBES ON THE EDGE, takes his granddaughter into the depths of the Amazon jungle where she bears witness to indigenous communities’ fight for survival. There, she shares rarely seen cultural traditions and ways of life that oftentimes clash with their colonial backdrop, documenting the mounting threats to their land, health and ways of life. Jean-Michel Cousteau and Jean-Jacques Mantello WONDERS OF THE SEA – 3D continues Cousteau’s father’s mission: educating the world about the miracles of the sea so they too will protect its vast, fragile and crucial resources.

EarthxInteractive, the interactive sub-division of the film festival, will present more than 40 cutting-edge virtual, augmented and mixed reality experiences that push the boundaries of storytelling. Employing immersive technology to raise awareness for pressing global environmental issues, attendees will have the opportunity to go on wild, immersive journeys like swim with sharks, explore conservation efforts for some of the world’s greatest reefs and free dive with endangered whales in remote waters. The programming aligns closely with the year’s expo theme “Water for All,” showcasing ways to sustain clean, clear, abundant water for all and to protect the world’s oceans, rivers and lakes through immersive content.

From April 26-28, visitors will enjoy a lineup of top experiences, educational workshops and exhibits that address relevant environmental issues. Attendees will also be treated to world premieres including Underwater Earth’s “Guardians of the Kingdom,” narrated by Sylvia Earle – a 360 film that transports audiences into the waters of Tonga to reconnect whales and humans, 360 Labs’ 360 film “Tree Hugger,” which inserts viewers’ heads into a tree knot for a chance to explore the Sequoia’s inner world. Conservation International’s interactive VR experience “The Elephant Keeper” will also screen alongside the 360-degree film “My Africa” featuring Academy Award-winning actress and activist Lupita Nyong’o.