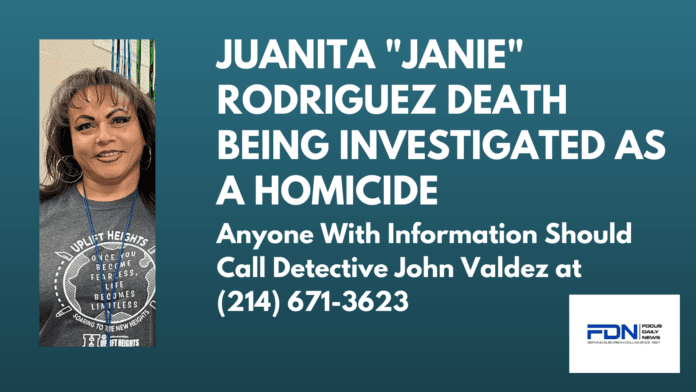 Yesterday the Duncanville Police Department sent us a press release about a missing person, Juanita Rodriguez. At the time they stated they had located her “abandoned” vehicle on Navy Avenue, but Ms. Rodriguez was missing. Sadly this evening, they sent the following update:

The Duncanville Police Department initially responded to a call concerning Juanita Rodriguez as a missing person on Monday, April 18, 2022. On that date, Duncanville police officers were unable to substantiate circumstances that would indicate Ms. Rodriguez’s disappearance was anything but voluntary based on information provided
by the reporting party. The requirements for filing Ms. Rodriguez as a Missing Person did not meet the criteria outlined by Duncanville departmental regulation or Texas State law.

On Thursday, April 21, 2022, at 3:42 p.m., Dallas Police Department released the following information via a press release:

“On Wednesday, April 20, 2022, at 2:32 p.m., Dallas Police responded to a call regarding a body at 3000 S. Ledbetter Drive. Upon arrival, officers found a body wrapped in a plastic tarp on the side of the street. Homicide detectives, Crime Scene, Dallas County Medical Examiner field agents responded and processed the scene. The race, gender, cause of death, and identity of the victim were pending based on the medical examiner’s autopsy.

“On April 21, the victim was identified as 54-year-old Juanita Rodriguez. This unexplained death has been reclassified as a murder based on the medical examiner’s autopsy which determined the victim died from a gunshot wound. Rodriguez was reported missing by her family on Saturday, April 16 to the Duncanville Police Department. On Monday, April 18, 2022, Rodriguez’s vehicle was found by Dallas Police abandoned on Navy
Avenue.” https://dpdbeat.com/2022/04/21/homicide-at-3000-s-ledbetter-drive/

The Duncanville Police Department wishes to extend our deepest condolences to the family and friends of Juanita Rodriguez.

The motive and circumstances surrounding this murder are under investigation. Anyone with information is asked to call Detective John Valdez at (214) 671-3623. Future inquiries may be sent to the Dallas Police Department.