Christmas came early this year for die-hard Downton Abbey fans like me. Fortunately, Focus Features film version of my favorite TV series is every bit as wonderful as we hoped. The Downton Abbey movie is a hit in my book!

Picking up where we last saw the Crawley family and their (mostly) dedicated staff, Downton Abbey the film completes the story arc for some beloved characters. Chauffeur-turned-family-member Tom Branson (Allen Leach), was widowed when Sybil Crawley died giving birth to their daughter several seasons ago. It appears Tom may finally find romance with a lovely visitor (Tuppence Middleton).

Our favorite butler, Mr. Carson (Jim Carter), is thrilled to be called out of retirement to make Downton Abbey ready for a visit from the royal family. But like his wife, housekeeper Mrs. Hughes (Phyllis Logan), Carson is unwilling to be shoved aside by an officious Royal Butler (David Haig).

Lady Mary (Michelle Dockery) sports a daring new haircut and great clothes. She seems happy in her marriage to Henry Talbot (Matthew Goode). Good news after the tragic death of her husband Matthew. Apparently I wasn’t the only fan who bawled like a baby over that tragic episode! Lord Grantham (Hugh Bonneville) and lovely wife, Cora (Elizabeth McGovern), are finally enjoying a peaceful life with their grandchildren all around them.

Lady Edith (Laura Carmichael), who endured many major disappointments throughout the run of the TV series, is now happily wed. Edith’s husband Bertie Pelham (Harry Haden-Patton) is also a royal favorite. After suffering a few cliffhangers of their own, loyal valet John Bates (Brendan Coyle) and lady’s maid Anna Bates (Joanne Froggart) have found well-deserved happiness. But that doesn’t stop them from master-minding a scheme to rid Downton Abbey of unwanted visitors–like the royal servants.

Mr. Molesley (Kevin Doyle), is overly enthusiastic at his opportunity to serve the King and Queen. Current butler Thomas Barrow (Rob James Collier) is upset when Mr. Carson returns to run the household. That is, until he finds a new ally in a handsome footman for the royal family, Stephen Campbell Moore. Meanwhile, down in the kitchen Daisy (Sophie McShera) and Mrs. Patmore (Lesley Nicol) relish a rare chance to cook for the royal family.

Fireworks are threatened when the formidable Dowager Countess of Grantham Violet Crawley (Maggie Smith) threatens to cause a scene (while her witty remarks throughout the film are laugh-out-loud hilarious). BFF Isobel Crawley (Penelope Wilton) tries to keep the countess from accosting the Queen’s lady-in-waiting (Imelda Staunton). Staunton plays an estranged Crawley cousin, and Countess Violet wants her to name Lord Grantham as her beneficiary.

Downton Abbey is rated PG for thematic elements, some suggestive material, and language. The immensely satisfying drama, is directed by Michael Engler and written by Julian Fellowes. This lovely film manages to wrap up a number of plot elements in only 90 minutes. It is a fitting finale for a well-loved television series. 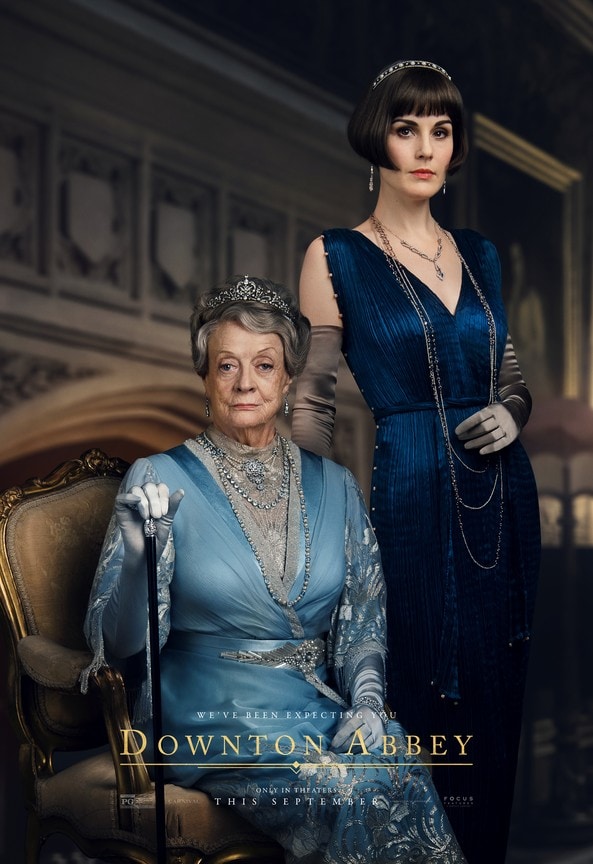