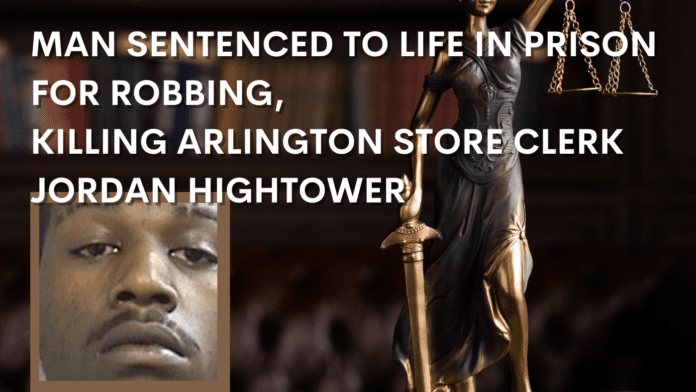 (Fort Worth, TX) – A Tarrant County jury Monday found Dorian Ray Woodard, 20, guilty of
the 2021 murder of Jordan Hightower, a 31-year-old clerk at a south Arlington E-Z Mart.
Woodard received a sentence of life in prison, plus a $10,000 fine, for the crime.

About 3:30 a.m. January 17, 2021, Dorian Woodard went into the E-Z Mart south of
Interstate-20 near Matlock and Bardin roads in Arlington. He walked through the store,
shopping, then approached the counter after other customers left.

He pulled a handgun on the clerk, Jordan Hightower, and shot him several times. Woodard
tried to open the register but was unsuccessful. He gathered some merchandise, left the
store and returned for more.

“This was a senseless act of violence,” Russo said.

Hightower was unconscious and on the floor behind the counter for more than an hour
before someone called 9-1-1. He was pronounced dead at the scene.

Surveillance cameras at the store showed a person shoot Jordan Hightower and take items
from the store. The shooter was later identified as Woodard.
“This is about a life lost,” Matt Rivers said. “That is why we are here.”

This trial won’t bring him back.

The facts are clear: Jordan Hightower was shot. He was left suffering. He died alone. His
family will never see him again.

“I’m asking you to do the right thing by (Jordan Hightower’s) family,” Matt Rivers said.

“Just do the right thing.”