Home Sports DeSoto Girls Basketball Team A Legacy of Champions With Back To Back... 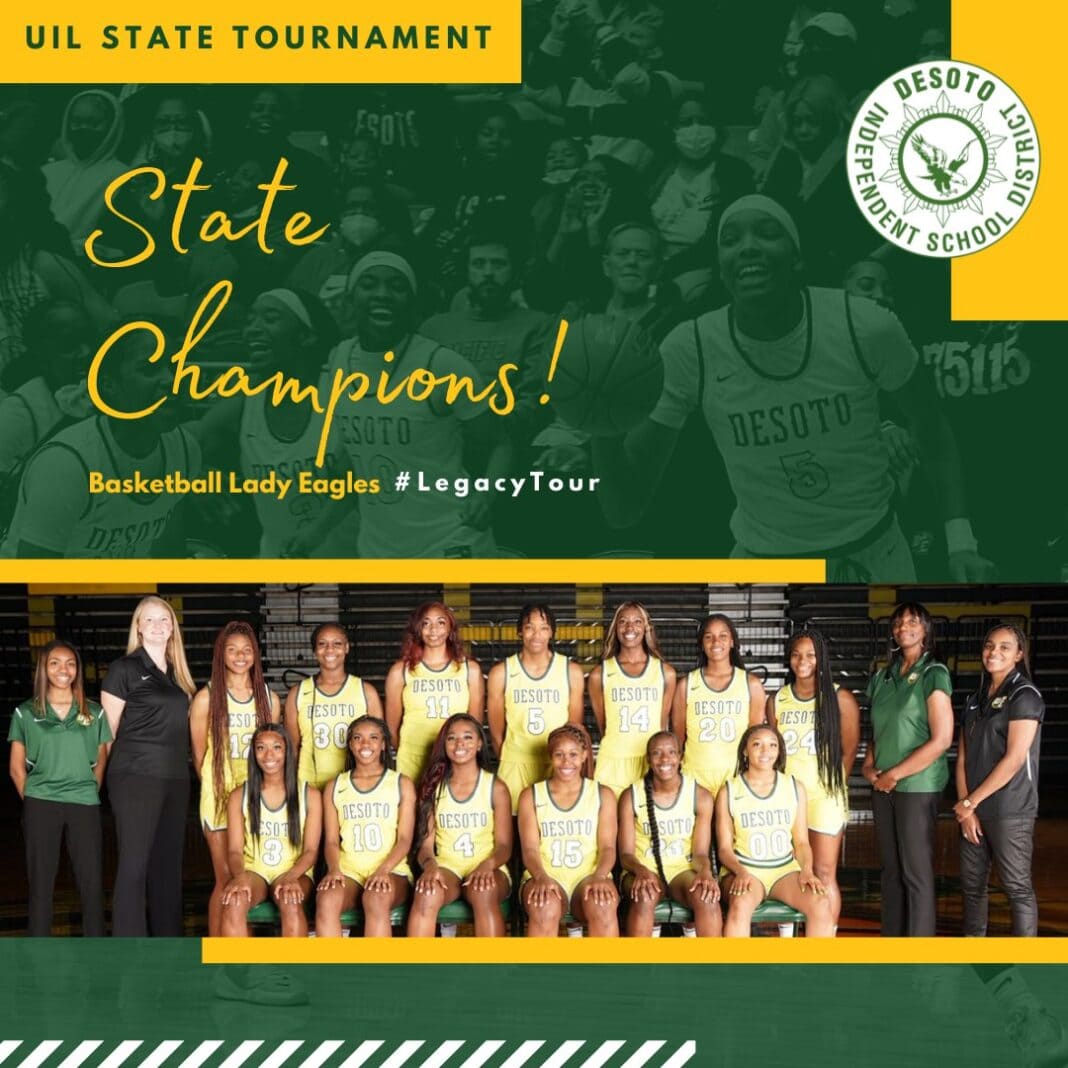 Legacy Season, Back To Back State Championships For DeSoto Girls Basketball

Sports fans in DeSoto – and there are plenty – sure are celebrating a lot lately. Only a little more than two months into the new year and they have two major accomplishments to boast about.

A month ago, they celebrated a Super Bowl championship with Von Miller, linebacker for the Los Angeles Rams. It was the DeSoto High graduate’s second world title, having also won one – in which he was also the MVP – with the Denver Broncos in 2015.

Now, the DeSoto High Lady Eagles basketball team (35-2), one season after making history with their first state championship, added more history by repeating as 6A champs with a 40-23 victory against a neighbor from 20 minutes down the road.

The game, against South Grand Prairie (35-5), however, was played in the Alamodome in San Antonio this past Saturday. There was also history on the SGP side as it was the first state finals appearance for the Lady Warriors.

“Any time your school wins a state championship you can’t help but be proud of the team, the coaches, the teachers and administrators and parents that helped them to reach that pinnacle of success,” said Claude Mathis, DeSoto Athletic Director and Eagles head football coach.

Mathis was in the Alamodome watching the contest this year, just as he was in 2021.

“Last year, you could feel the momentum building with, and for, this group of young ladies as well as feel the community coming together behind them,” he said. “With all the negativity in the world these days, to have our girls basketball team bring positivity, joy and hope to the school district and community is priceless.

“Being on a field, in a stadium at an arena always brings a sense of excitement. When it’s your school, your students and they are trying to recapture an almost once-in-a-lifetime dream, the excitement level is at an all-time high.”

“The Desoto Chamber is super proud of The Desoto Lady Eagles. We are so proud of how they have represented the school, the city, and most of all themselves,” she said. “The Lady Eagles just showed the world who they are, what they represent, and that they were a force to be reckoned with. They worked hard and it paid off. Congratulations Lady Eagles!”

DeSoto Mayor Rachel Proctor said the back-to-back state titles add to the legacy that is the DeSoto city family of champions. It was also a nice way to cap off the city’s birthday.

“DeSoto is a family, and we celebrate the good and overcome the bad together. Fortunately, with the Lady Eagles winning their second consecutive state championship, and DeSoto observing its 73rd birthday earlier in the day, Saturday was a time to celebrate in DeSoto,” she said.

“Every girl on that team is a winner in life and can stand on her own, but I believe that knowing their city, their mayor, and people they didn’t know, believe in them and were standing behind them, win or lose, really makes a difference.”

Some folks in DeSoto, Mo., about 20 miles even offered their congratulations to their namesake in Texas.

While they share the same city name, that’s about all. DeSoto, Mo. has a population of just over 6,000 compared to over 50,000 for DeSoto, Tx. Also, the Missouri squad is named the Dragons.

To which DeSoto, Mo. resident Paul Craig jokingly posted, “I was gonna ask when we changed our name from Dragons.”

The DeSoto Lady Eagles have not lost to a team from Texas on the court since Feb. 25, 2020, when they were ousted in the third round of the playoffs by rival Duncanville, 47-43.
Since then, the Lady Eagles are 56-0 against other teams from the Lone Star State – when they play on the court. The lone loss was a forfeit last season to Cedar Hill when DeSoto officials and coach Andrea Robinson decided to not play the game after some previous physical altercations.

Of course, the Lady Eagles don’t lose too often when they play teams from outside of Texas, either. Overall, they are 63-4 the past two seasons.

While DeSoto has a way of making it look easy, they overcame some huge challenges this season. Just a year ago, Ja’Mia Harris was sidelined with a torn ACL, and on Saturday night she was named Conference 6A UIL State Championship Game MVP with game-high 16 points and 5 rebounds.

Coach Andrea Robinson has earned District 11-6A Coach Of The Year.

Praise for the runners-up

South Grand Prairie also received plenty of congratulations for making their own history. Last season the Lady Warriors reached the state semifinals for the first time ever and this season was their first title game appearance.

Also, because of COVID-19, the state playoffs format was changed last year. The semifinals were played locally, so this year was also the first time the Lady Warriors played in the Alamodome.

“Fantastic season Lady Warriors. The alumni are so proud of you. Reaching further is so admirable, and that’s what life’s all about. Way to show the next (group of) Lady Warriors how it’s done,” said alumnus Ang Ha.

“You all made Grand Prairie proud,” added Scott Baker.

Retired legendary coach Samantha Morrow, who coached Mansfield to four consecutive state championships from 1999-2002, later led the Lady Warriors from 2013-18. She offered her accolades for current coach Brion Raven and her squad.

“So proud of the SGP Lady Warriors past and present. Coach Raven you’ve taken the program to another level. Your staff and team show class and 100% effort. Proud to be a SGP Warrior,” Morrow said.

Seniors Move Forward, But A Lot Of Talent Returns

While both teams featured rosters that were senior-laden (DeSoto 7, SGP 5), both featured a solid number of underclassmen to build around next season in the quest for another trip to state.

DeSoto has one junior, three sophomores and a freshman. Meanwhile, SGP has four juniors, a sophomore and two freshmen, including Victoria Dixon, who was named to the all-state tournament team.

Senior Sa’Myah Smith has signed with LSU. Ja’Mia Harris and Michayla Gatewood will be playing for Kansas State next season. Senior Ayanna Thompson will be playing for Ole Miss. Amina Muhammad is will play at UT, while Tionna Herron is headed to Kentucky.

In a press conference following their win Coach Robinson said, “These ladies are leaving their legacy. DeSoto girls basketball will never be the same because of these ladies.”

SGP Has A Bright Future

“I’m extremely proud of our team this season. Completing another historic run and finishing as state runner-up in the largest classification is an outstanding accomplishment,” Raven said. “Although we were disappointed, we did not finish the job, our kids competed and battled versus a nationally ranked team full of seniors.

“We are losing five seniors, but we return a lot of talent. We return our leading scorer, sophomore Adhel Tac, and our second-leading scorer, freshman Taylor Barnes, along with key contributors Joy Madison Key and Ahrianna Morgan.

“We work really hard to have a great program – and not just a great varsity team, so I am looking forward to some of our kids coming up that will be varsity players next year as well.”

Other teams from the area who reached the playoffs and how they fared include: