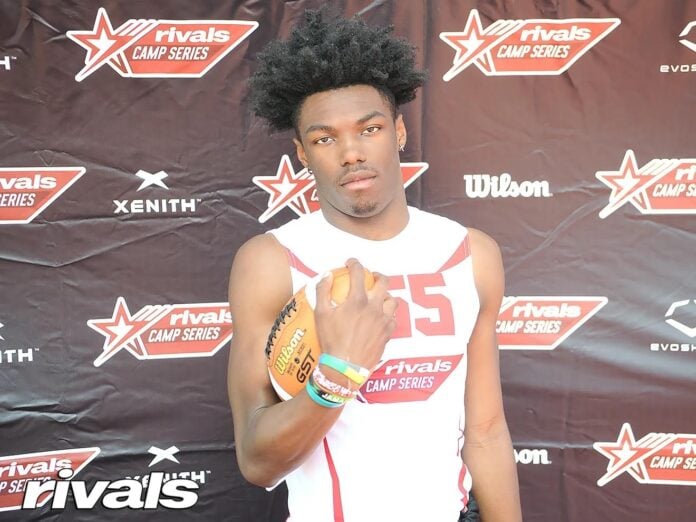 Xavier Brown Will Play For UConn

Every day, Brown and Peoples face each other in practice.

“We’re back and forth,” Brown said. “I like going up against him every day. If anything, it will make us better for when we go up against the Allens, DeSotos and Duncanvilles.”

Brown, who is 6-foot-3, 180 pounds, transferred to Cedar Hill from Mesquite Horn where he was a Second Team All-District Receiver last season. His mother is the librarian at High Pointe Elementary, and he had originally hoped to start his high school years at Cedar Hill.

He will bring a presence to a position where the Longhorns had a great talent of senior talent in 2020. Class of 2021 Seniors Javien Clemmer (New Mexico State), Jayden Moore (Midwestern State), Julian Austin (Langston) and Brian Rainey (Trinity) helped lead CHHS to the UIL Class 6A Division II Championship Game in January. Each of those receivers will join college football programs this season.

Like Clemmer, who transferred to Cedar Hill from Camden, Arkansas, Brown will look to make a large impact in his lone season as a Longhorn.

“They’ve welcomed me really well and showed me a lot of love,” Brown said.

Cedar Hill will open the 2021 season on August 27 vs. Rockwall at Longhorn Stadium, and Brown has been working consistently with Longhorns junior quarterback Cedric Harden.

Brown has learned a great deal from Cedar Hill head football coach Carlos Lynn, who is 35-12 with a State Championship Game appearance and two district championships in four seasons.

“Coach Benjamin is tough on you – he makes you work, but he’s going to get you where you need to go,” Brown said.

The UConn Football Team reached its pinnacle in 2011 when it won the now defunct Big East Football Conference to reach the Fiesta Bowl in Glendale, Arizona. In 2015, the Huskies shocked Houston, derailing the Cougars’ chances of reaching the College Football Playoff.

Despite intermittent success, UConn can boast of several players in the NFL. Players like fullback Anthony Sherman, who won a Super Bowl with Kansas City in 2020.

Competing in the NFL is Brown’s long-term goal as well.

“Choosing UConn was an easy decision,” Brown said. “They were consistent in showing that they wanted me to come here. I visited the campus in Storrs, Connecticut in June. I can see myself there for four years.”

The opportunity to play as a true freshman and the chance to build UConn – now an FBS independent – into a contender factored heavily into Brown’s decision.

“We want to change the program around and turn it into a football school,” said Brown, who plans to graduate from Cedar Hill at semester to enroll at classes in Storrs, Connecticut – 1,710 miles northeast of Longhorn Stadium.

He plans on studying Business at UConn and beginning a career in Real Estate.

The Huskies will open the 2022 season at Utah State, followed later that month with trips to Michigan and North Carolina State, respectively.