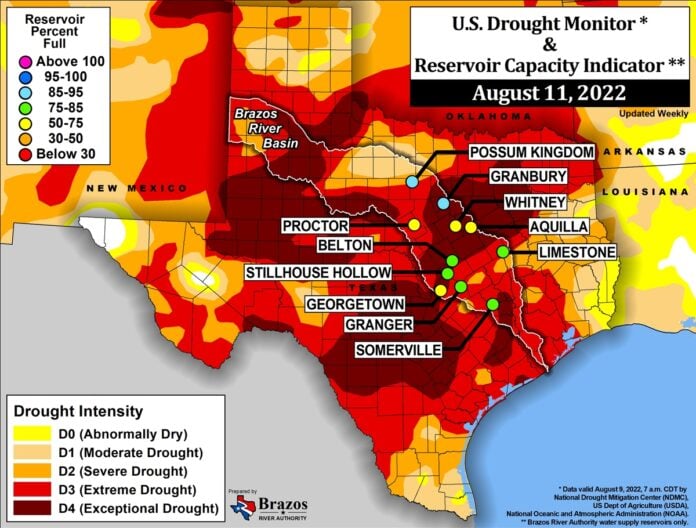 Waco, TX – August 17, 2022 — The Brazos River Authority has informed all customers accessing water from the BRA system of reservoirs that a System Stage 1 Drought Watch has been declared for the entirety of the reservoir system including lakes Possum Kingdom, Granbury, Whitney, Aquilla, Limestone, Belton, Stillhouse Hollow, Granger, Georgetown, Somerville and Proctor. This notice also applies to lakeside residential and commercial use water permit holders.

Though most BRA contract holders have already been notified of Stage 1 Drought Watch as individual reservoirs reached trigger levels that moved them into that status, the System Stage 1 Drought Watch is triggered when the combined storage capacity within the BRA system declines to 1,524,177 acre-feet.

The goal of the System Stage 1 System Drought Watch is a voluntary reduction of five percent (5%) of the water use that would have occurred in the absence of any drought contingency measure and to raise awareness of the developing drought situation.

The BRA has requested that customers who obtain their water supply from any BRA System reservoir consider the following actions:

The BRA’s Drought Contingency Plan (DCP) provides for several lake level triggering criteria, based on four levels of potential drought conditions. Should Stage 2 triggering criteria be met, both BRA customers and the general public will be notified, and customers will be asked to reduce water consumption by ten percent (10%) or more depending on conditions at that time. To view the full Drought Contingency Plan, click here.

The BRA is required by the Texas Commission on Environmental Quality to prepare a drought contingency plan and to update that plan every five years. The most recent update to the DCP was April 29, 2019.

The DCP outlines steps to ensure there is sufficient water available to meet all needs of those receiving water through the BRA during times of drought. The DCP includes four stages: Drought Watch, Warning, Emergency and Pro-rata Curtailment. Each stage is marked by trigger points measured either by a lake level or by the water storage capacity. The BRA System’s Stage 1 is triggered when the combined storage capacity reaches 1,524,177 acre-feet.

The purpose of the Stage 1 System Drought Watch is to alert the public of the current drought situation and promote careful use of water.

Should the current drought conditions continue, it is possible that a System Stage 2 Drought Warning could be issued by December this year. Stage 2 is triggered when the combined storage capacity reaches 1,152,432 acre-feet.

The BRA continually monitors weather forecasts, streamflow and lake levels throughout the Brazos River basin. Since all reservoirs have reached trigger levels for Stage 1 Drought Watch according to the DCP, the BRA asks that everyone keep in mind the extreme drought conditions are affecting the majority of the state and conservation is recommended for all areas. For information on water conservation, visit www.Brazos.org/Conservation.