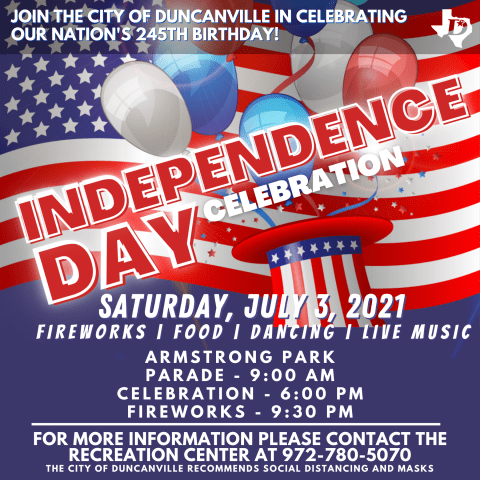 The Duncanville Lions Club is excited to announce the return of their annual July 4th parade, which was canceled last year due to Covid. The parade will be held on July 3rd, with the theme “Land of the Free and Home of the Brave.” Two longtime servant leaders who represent the “Lions Class of 1973,” Dr. Bill Dover and Bob Lee, have been selected as Grand Marshals of the parade.

The “Land of the Free, Home of the Brave” theme comes from the last line of our national anthem. The lyrics of the Star-Spangled Banner come from the “Defense of Fort M’Henry”, a poem written in 1814 by 35 year-old lawyer and amateur poet Francis Scott Key. After witnessing the bombardment of Fort McHenry by British ships in the War of 1812, Key was inspired by the large U.S. flag flying triumphantly above the fort during the battle and U.S. victory.

Bob Lee came to Duncanville as a teenager, and graduated from Duncanville High School in 1956. Upon graduating, he worked for the City of Duncanville for 39 years. He designed and installed the water system which is considered one of the best in the state and possibly the nation. Lee retired as Public Works Director, and has been retired for 22 years. However, he still thinks of ways to improve Duncanville. The street leading into the City’s Service Center is named after him.

Lee was married to his wife, Anita, over 50 years, until she passed away last December. They have two children, Marla and Victor. Victor died from cancer about seven years ago. Lee also has several grandchildren.

Dr. Dover is a Veteran who served in the U.S. Army. He was instrumental in bringing Holy Spirit Catholic Church to Duncanville, and was very active with the Knights of Columbus. Bill and his wife, Cindy, have been married over forty years. They have one daughter, Katie, who’s married to Nick, with one grandson, Will.

“These men are the city’s hidden treasures, and have done much for this city just because it was the right thing to do. They never looked for a thank you or a pat on the back, just doing what needed to be done. There are many times when things have happened because of their efforts and nobody knew what had transpired but them,” said longtime friend and associate Larry Easley.

To participate in the parade, please register with the Duncanville Lions Club. You can register at any of the following locations: Duncanville Chamber of Commerce, 300 East Wheatland Road; Red Bird Lanes, 1114 S. Main Street; or Ben Franklin Apothecary, 302 N. Main Street.

Applications are also available for downloading at duncanvillelionsclub.com/parade. Forms can be mailed to Duncanville Lions Club, Parade Entry, P.O Box 381055, Duncanville, TX 75138. For more information about the parade or to get involved with the Duncanville Lions, please call Don McBurnett at (214) 918-9981.

Independence Day celebrations in Duncanville continue with fireworks and other activities  at Armstrong Park, starting at 6 p.m. Saturday.