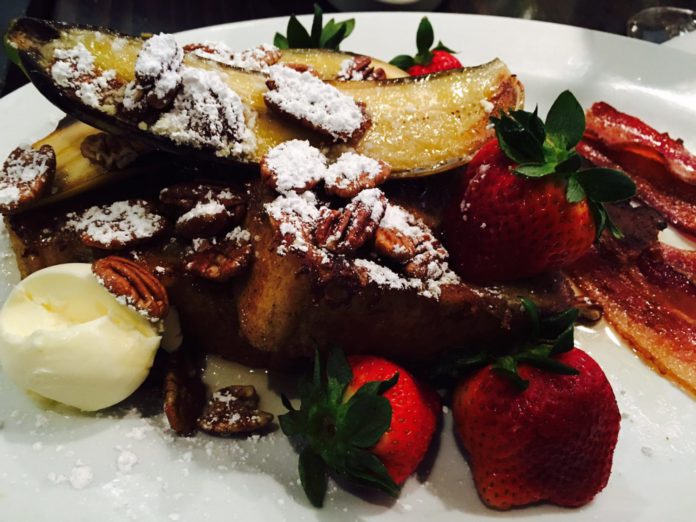 At the Hash House a Go Go in Plano, every meal is a feast. So take my advice–unless you are really, really hungry–or take a family of four or more—maybe start with one of the small plates listed on the menu.

Those of you who are first-timers to Hash House a Go Go, home of the “twisted farm food”, prepare for a shock. These portions are meant to satisfy farmhands who’ve been out in the field all day.

My husband and I recently experienced the Hash House phenomena for the first time. I was thrilled at the idea of “brunch for dinner,” since breakfast is my favorite meal. Sure enough, bacon, eggs, French toast, waffles, biscuits and gravy are all on the menu. But at Hash House, they may be served all at once, on the same plate! 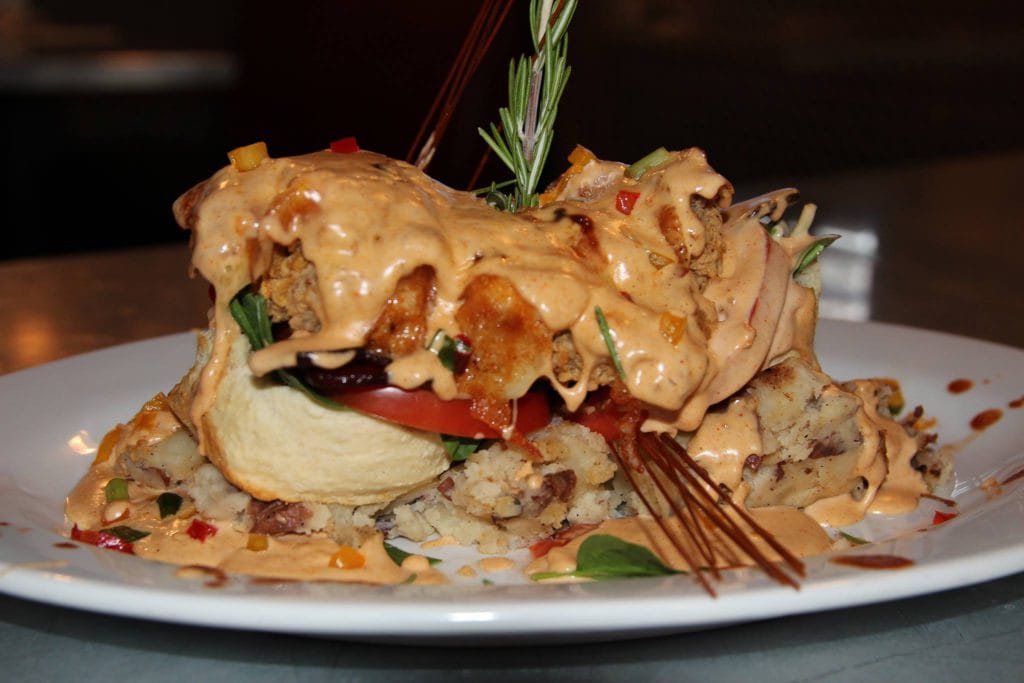 These super-sized entrees are clearly not meant for anyone on a diet. Because the prices were so reasonable, we thought the portions would be smaller. Next time (and there will definitely be a next time) we will be better prepared. Thankfully, the HH staff is happy to offer take-home boxes.

Some other favorites we heard about from HH regulars but didn’t try were: Big O’ Chicken Pot Pie ($13.99) and Stuffed HH meatloaf (with fresh spinach, roasted red peppers, mozzarella cheese, Marsala cream sauce and griddled mashed potatoes – $18.99). There was a Tractor Driver Combo listed on the menu, but I shudder to think how gargantuan that platter would be.

HH also has some exotic drinks like the spiked Kiwi Watermelon Lemonade ($8.99). My designated driver/husband enjoyed a non-alcoholic version for only $5.99.

They have several interesting variations on the HH Bloody Mary, including White Lightning (with moonshine, asparagus, baby corn and a Slim Jim – $10.99) and a Johnny’s Famous B.L.T. Mary ($10.99 for a drink trimmed with a tomato slice, smoked bacon slice, lettuce and white toast).

It is entirely possible to eat healthy at HH, but then you’d be missing half the fun. It’s a better idea to take your family after they have skipped several meals. These made-from-scratch dishes are meant to be shared.