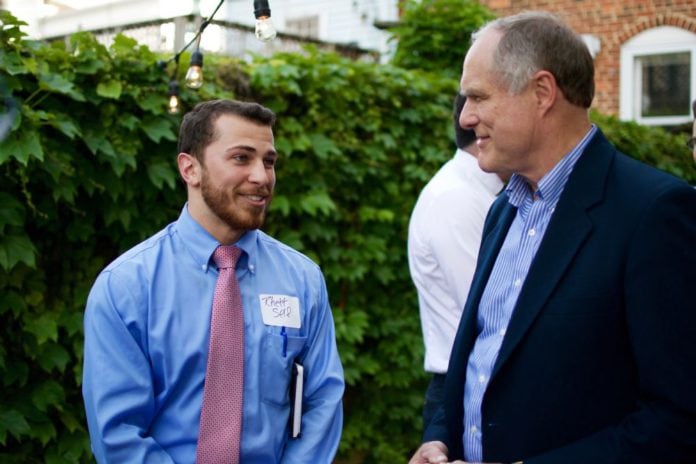 DALLAS—As the spring semester came to an end at Dallas Baptist University, a group of DBU students took their first few days of summer to spend a week in Washington, D.C.

Led by Dr. Brent Thomason, assistant professor of Biblical studies and director of DBU’s M.A. in International Studies program, and Dr. Rob Sullivan, professor of political science and dean of the College of Humanities and Social Sciences, the group had the opportunity to participate in the 21st Century Wilberforce Initiative’s 2016 Emerging Leaders Conference.The mission of the organization is to “mobilize and equip partners, including Christians, activists, and people of other faiths, to promote global protections and reforms through advocacy, capacity building, and technical innovations.”

The conference gave students a glimpse into this fight for religious freedom.“We were able to witness the 21st Century Wilberforce Initiative’s mission in action,” said Sean McAndrews, junior political science major from Omaha, Nebraska. “It was clear that this is an organization made up of passionate people who are making real change happen to alleviate the suffering of the persecuted.”

Students began the conference by seeing what the 21st Century Wilberforce Initiative does, specifically in terms of advocacy. They spent the first day in sessions learning about different persecuted groups, a variety of advocacy groups and what they do, as well as getting to know some of the 21CWI’s partners on the hill; congressmen and women who are actively involved in this issue.

After learning about these topics, the students had the chance to put some of them into practice, as they spent the next day on Capitol Hill delivering flyers to members of Congress and sharing about religious persecution.

“The conference opened our eyes to the tragic reality of global religious persecution,” explained Dr. Rob Sullivan. “I am very proud of the maturity displayed by each and every DBU student participating in the conference. Personally, the week left me very convicted over the challenges our brother and sisters in Christ face daily.”

In addition to advocacy in action, one day of the conference was focused on networking. Students were able to spend time getting to know a wide variety of individuals involved with the fight for religious liberty, establish connections, and forge relationships that will aid in these efforts to prevent religious persecution. For one student, these events opened his eyes to the direct correlation between freedom from sin in his own life through salvation and the need for freedom for all.

“Religious freedom is pivotal to any civil society,” remarked Micah Raies, assistant director of transfer recruitment, “for it is the fountainhead by which all other freedoms flow. The grace of Christ beckons us to freedom from sin. Our call is to beckon others to freedom through Christ. Therefore, it is our divine duty to stand for freedom for all. Though man may seek to suppress this fundamental right, it is the duty of the saints to stand for justice, humility, and love for all.”

The trip came to a close with the DBU group touring many of the staples of Washington, D.C., including the National Archives, the Library of Congress, and the many national monuments. They also had the opportunity to take an in-depth tour of the Capitol, led by Congressman Frank Wolf, a long-time advocate for religious freedom and a Distinguished Senior Fellow of the 21st Century Wilberforce Initiative.

”The 21st Century Wilberforce Initiative Emerging Leaders conference opened our students’ eyes to the dissolution of religious liberty around the globe,” remarked Dr. Brent Thomason. “Daily, our most fundamental right as citizens of this world comes under assault. This trip awoke us to the need for a modern-day Wilberforce to take up the mantle and continue the battle for religious freedom both at home and abroad. Our hope is that such a Wilberforce will arise from the ranks of our DBU students and secure today the rights we desire for our children tomorrow.”