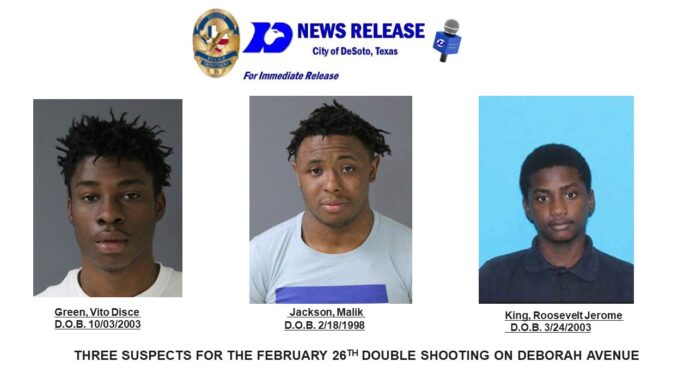 UPDATE: Editor’s Note, DeSoto Police Department had the photos and names mixed in the original photo we shared, we now have the correct photo as re-issued by the DeSoto PD.

On the evening of February 26, 2022 the DeSoto Police Department responded to reports of a shooting at a Deborah Avenue address. One of the shooting victims called the Police Department to notify them they had driven to a Love’s Gas Station in Dallas.

DeSoto Police and EMS arrived at the gas station and discovered a male and female with gunshot wounds. DeSoto and Dallas Police helped secure the crime scene at Love’s. Police provided basic medical treatment at that location until EMS arrived and transported both victims to a nearby Dallas hospital.

The male victim was reported in critical condition and the female was reported to be in stable condition. Investigators did not naming the victims at initially. They only said the male is a resident of Dallas and the female is from Garland. It is unclear at this time why the victims were in DeSoto during the incident but detectives have reason to believe that the meeting was pre-arranged. The Police Department did not release additional details on motive.

Today, the DeSoto Police Department announced they have arrested and charged three men for the February 26th double shooting of a seventeen-year-old man and woman on the 1400 block of Deborah Avenue in DeSoto.

Eighteen-year-old Vito Disce Green, twenty-four-year-old Malik Jackson, and nineteen-year-old Roosevelt Jerome King, all residents of DeSoto, are in custody and have been charged with Aggravated Assault with a Deadly Weapon which is a second-degree felony under Penal Code 22.02 (a).