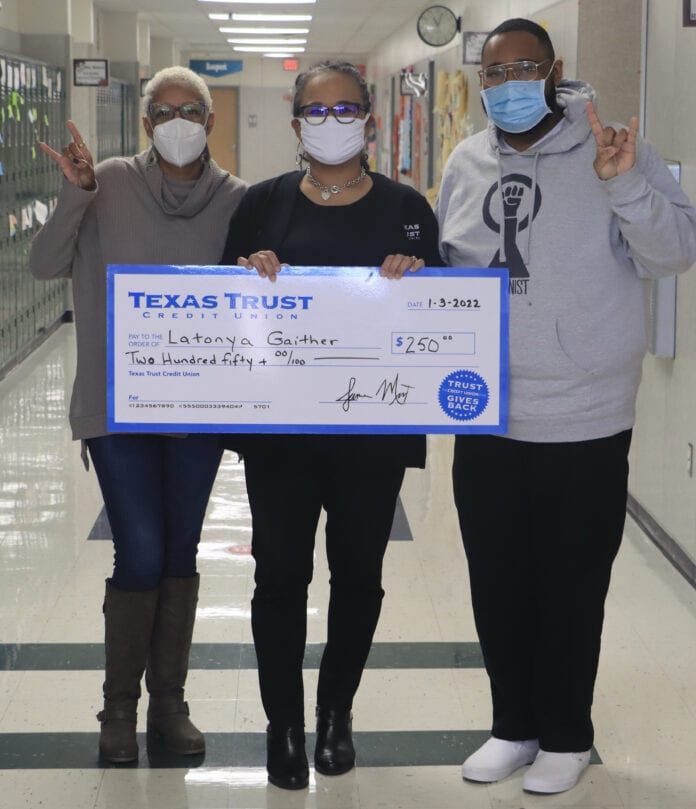 ‘Just Doing What We Need To Do’

Accolades may come, but she doesn’t expect them.

“I didn’t expect this recognition – I’m just doing what we need to do for our scholars,” Gaither said.

Investing In Her Scholars

Gaither said the $250 will go toward her classroom, to benefit her fifth grade scholars.

Gaither, who’s in her seventh year as a teacher, is in her first year in Cedar Hill ISD. She moved to the area from San Antonio where Gaither’s husband was stationed in the United States Air Force. Gaither herself is a US Air Force Veteran.

Since arriving at CHISD, Gaither has been impressed with the district’s emphasis on #STEMSpired.

Lewis, a first-year principal who himself taught Fifth Grade Science in the Houston area, is impressed with Gaither’s impact on the campus. He nominated her for the award.

“I wish my classroom – when I had taught – had looked like hers does now,” Lewis said. “It has Project-Based Learning Stations, and it’s a model 21st Century Classroom. We need to see more like it.”

A Family of Educators

The daughter of educators, Gaither grew up in Gary, Indiana, near Chicago.

“Because my parents were educators, I always wanted to go in the direction of something else,” Gaither said. “But I was ultimately drawn back to education.”

Gaither earned a Bachelor’s Degree in Education at Wayland Baptist in Plainview, Texas and a Psychology Degree from the University of Maryland. She’s currently working on a Doctorate in Learning & Organizational Change at Baylor University.